I bought a old 10ER from a guy who had it stored in a very packed garage. It came with a box of what turned out to be mostly junk. However it did contain a Jacobs #36 chuck. Doe anyone know of a way to mount it to a SS?
Thanks in advance
Top

What does the mounting side of the chuck look like?
A picture would be helpful.
Posting pictures can be a bit tricky, this link will walk you through the process. https://www.shopsmith.com/ss_forum/comm ... 19246.html

Also we would love to see a picture of your 10ER.

And, this is a file I put together with links to resources that are available for the 10E/ER.

First off welcome to the Forum.

Sorry I do not know which Jacobs Chuck the #36 is. Jacobs Chucks generally attach one of two ways. Either by threads or a tapered friction fit. The #36 is likely one of those two ways of attaching the Chuck. To use on your Shopsmith Model 10ER it would require an adapter. Most commonly the Drill Chuck is attached to the Shopsmith's 5/8" reverse tapered spindle but some uses have it on the Tailstock using a #2 Morse taper adapter. Having been 70 years plus or minus three years since the Model 10's were made other non Shopsmith parts get mixed in.

The Jacob 33B was the original chuck used for the Shopsmith Model 10E and had an adapter to attach it to the spindle. See the one in the picture below on the lower left. It was soon replaced by the Jacobs 3326 Chuck with a smooth 5/8" bore and a 3/8" set screw. It was made by Jacobs for the Shopsmith tool. That is the one that originally came with your 10ER. The picture below is of the different 1/2" chucks used for the Shopsmith tools over the years starting at the lower left. It does not include the 5/8" Keyless Drill Chuck currently sold by Shopsmith. The part numbers are from the Shopsmith parts lists not the Jacobs or other manufacturers numbers. There are other part numbers associated with these chucks found in Owner's Manuals, Parts Lists or Catalogs. Some are for individual parts but the ones listed in the picture below are for the complete Drill Chuck Assembly. 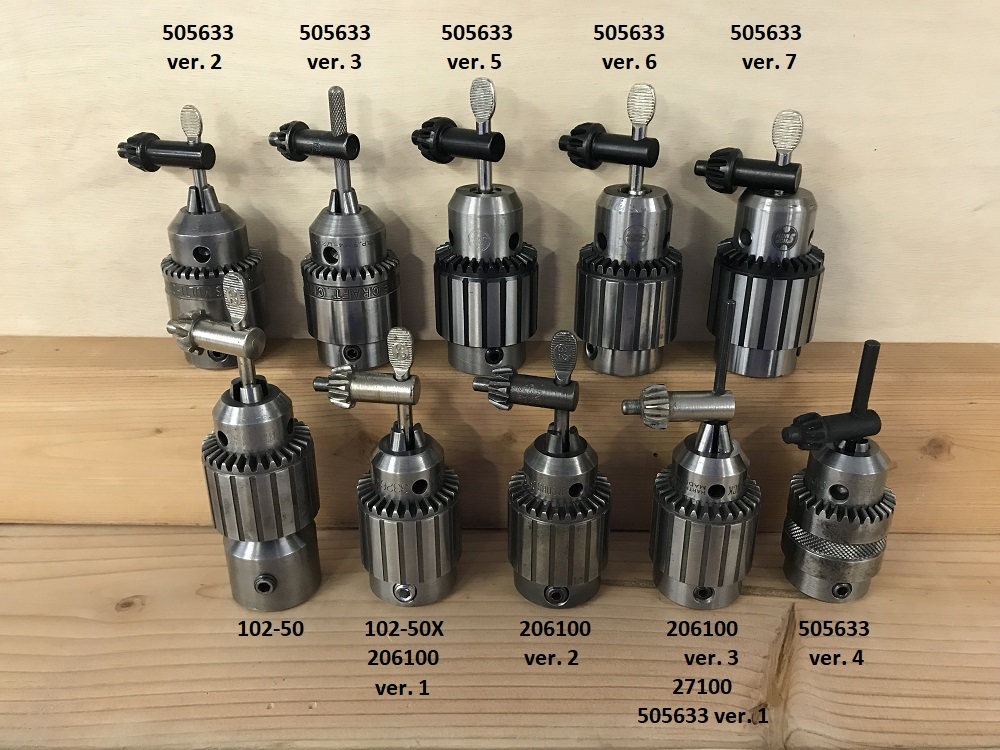 Drill Chucks aside you may find the forum post below interesting if you have not already read it.

The Jacobs Model 36 chuck is a 3/4" heavy duty chuck with a tapered mount. It would require an adapter to mount on the 10ER. I have never seen an adapter like that but then I have never looked for one. It is probably much easier to buy a Jacobs 3326 chuck on eBay. They show up there all the time.

I have a Jacobs #34 which is likely similar but 1/2" capacity. Although it has an adapter, taper to 1/4 shaft, I have not had any use for it related to the Shopsmith or anything else for that matter. It came with a Model 10 I purchased to restore and is part of the collection of non Shopsmith stuff I have and should someday get rid of. My wife would suggest sooner than later.

A 3JT to morse taper(?) adapter 'could' be modified to create a 5/8 smooth bore adapter.

A 3JT to MT2 adapter would allow use in the tail stock.

Info only - suggest another route for spindle use.