Garys, I really like your roll around cabinet you made. Could you let me know where I might get plans for it?
Top

Up until about 2 years ago I stored my SPTs on shelves. When I bought my Dewalt Planer in 2017, however, I also bought the Dewalt stand to hold it. I was so impressed with the stand -- especially the ease with which I could roll it around the shop -- that I later bought another Dewalt stand in 2019 to mount my SPTs to. There are several things I really like about this Dewalt stand. First, the SPTs are at about the same height as my SS so transferring tools is easy. Second, the stand has a very small footprint. Third, it has two storage shelves that keep all my SPT jigs close to the tools. Fourth, by the time I costed out 3/4" BB plywood and casters the price differential was not too much. According to my records I paid $143 at Home Depot for the stand. I didn't see the same stand on the HD website this morning. I bought this one because it had large, multi-directional casters and a higher table top (i.e. it is not the Dewalt planer stand, but rather some other rolling tool stand that Dewalt makes). 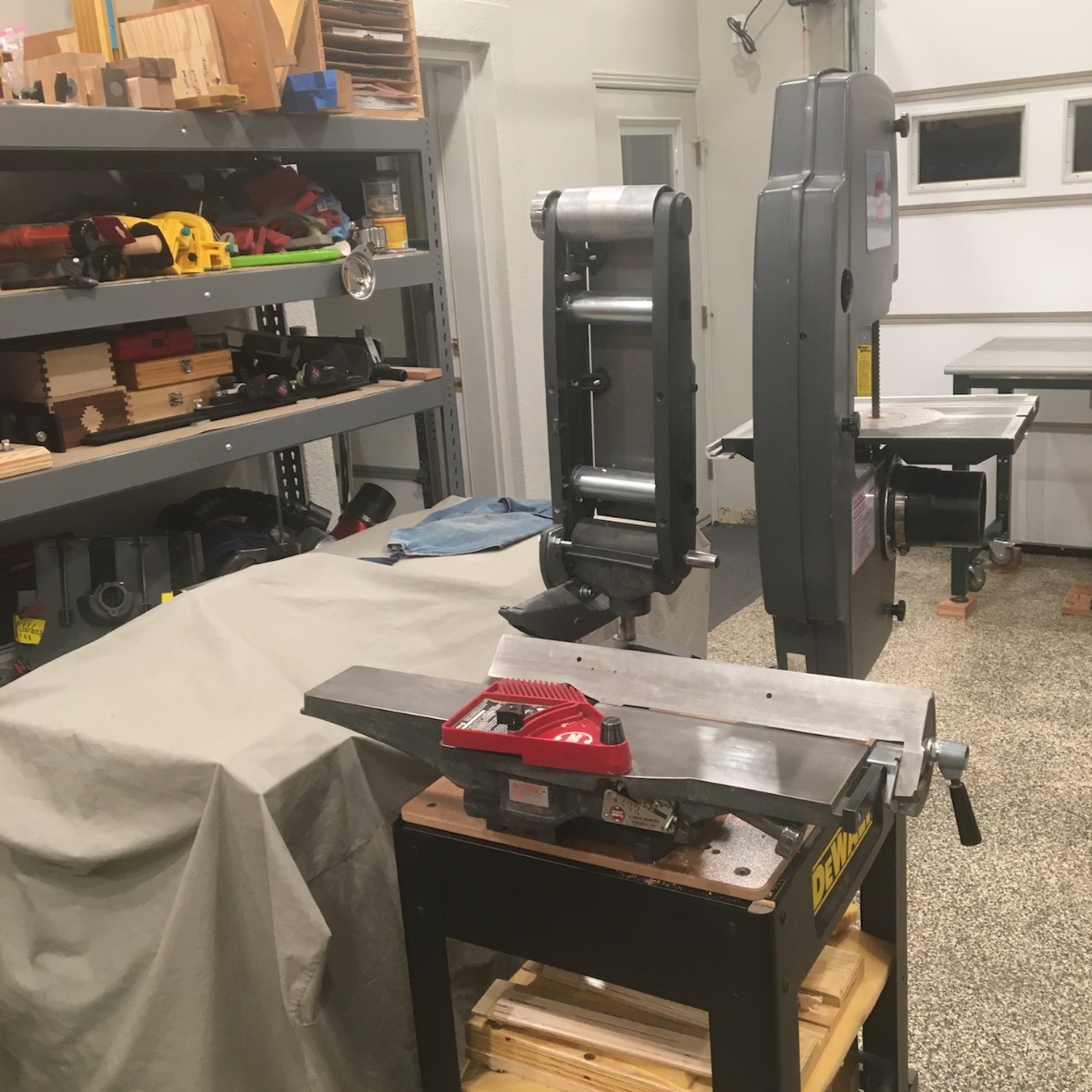 Mine is pretty simple, just a couple of cabinets on a rolling base with a top. The SPT's are mount on the top a few inches higher than the SS. The previous owner of my first SS had 6 of the SPT mounting stands but only had the Bandsaw and Jointer and never fulfilled his plan of adding additional SPT's The smaller parts will hang on the slat wall once I eventually get those parts unpacked.

The wood in the bottom is cut to size for drawers but I need to get dust collection set up in the new shop before I can plane them down to 15mm for my Blum drawer slides. 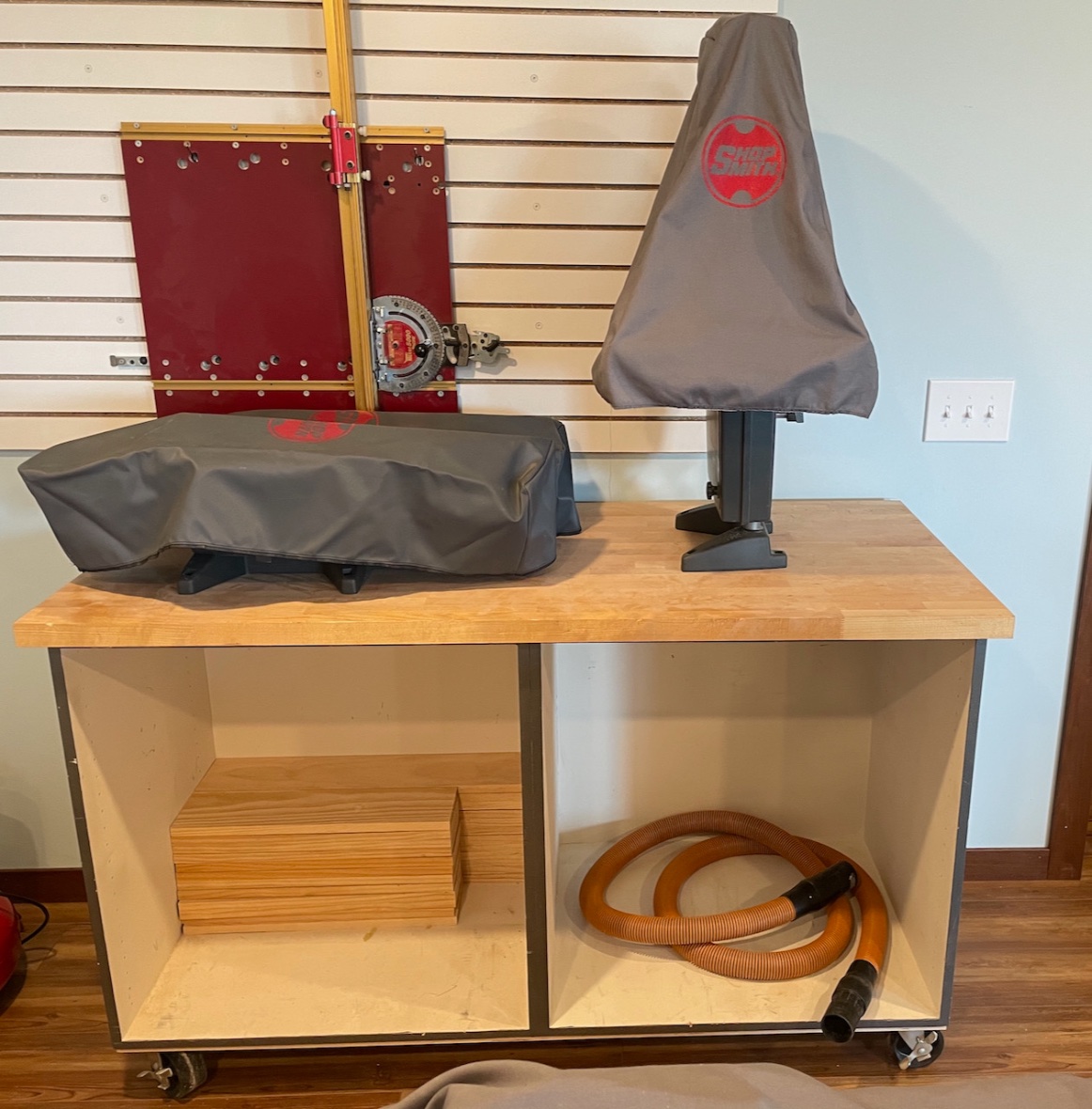 There aren't any plans for the cabinet. I build things from ideas in my head and no plans are ever drawn up on paper. After I built the first one from oak, I built a second one from cherry for my Son to store his small Shopsmith "stuff". It is the same box in different wood. If you want one, try to copy it from the pictures if that works for you. 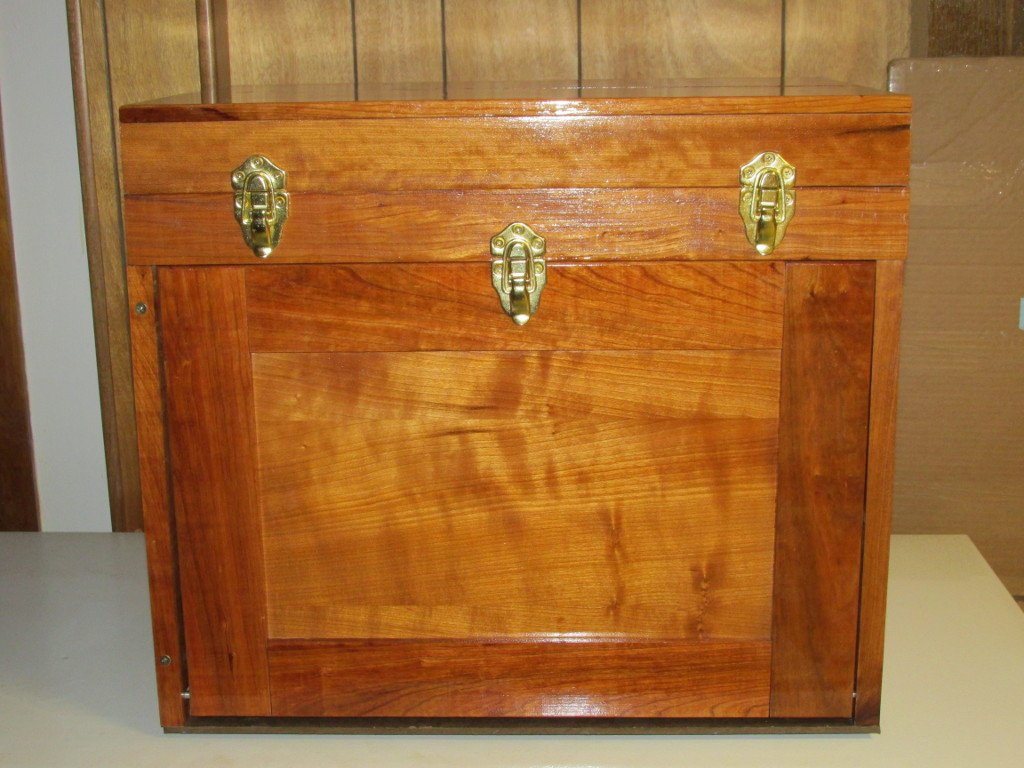 There aren't any plans for the cabinet. I build things from ideas in my head and no plans are ever drawn up on paper. After I built the first one from oak, I built a second one from cherry for my Son to store his small Shopsmith "stuff". It is the same box in different wood. If you want one, try to copy it from the pictures if that works for you.
weschest.jpg

Such a chest of drawers can also be used for storing clothes. I don't like bulky wardrobes. I have only one closet - to store jackets, coats, jackets and part of such a closet is reserved for my wife's dresses. Everything else is in the dressers.
Top

I used a two drawer file cabinet, put it on a caster platform and made it for two SPTs. Can make it whatever height you need to make the lifting to use easier. I use the drawers for plans, books and manuals. 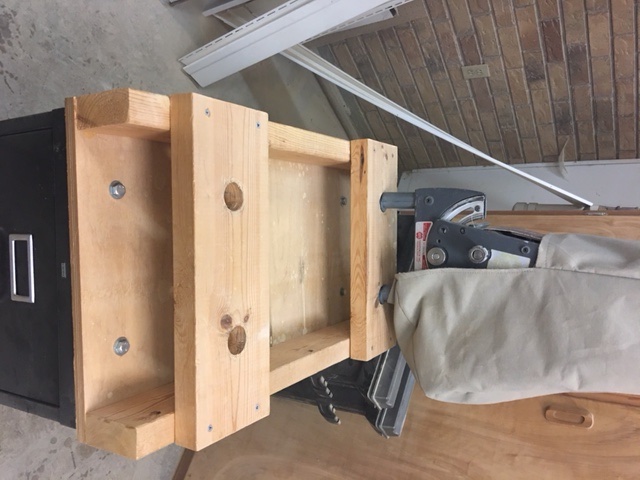 Judging by the photo, the design turned out to be not only comfortable, but also quite comfortable and stable. What you can’t imagine. It seems to me that this is even better than doing something to order in specialized workshops - there it will cost a lot.
Top

You have seen some great storage ideas already. Below is a storage cabinet I made for my first Mark V now 7 STP's and accessories. The box plus wheels dimensions are 48" W x 38" H x 19" D. As you can see it holds one each of most of the SPT's and other accessories. My Scroll Saw sits on a Power Station and my Planer is the pro model on it's own stand. Unfortunately I have outgrown it and need more storage as I now have a Mark 7 and a Mark V 520 not to mention the other Shopsmith models I have. 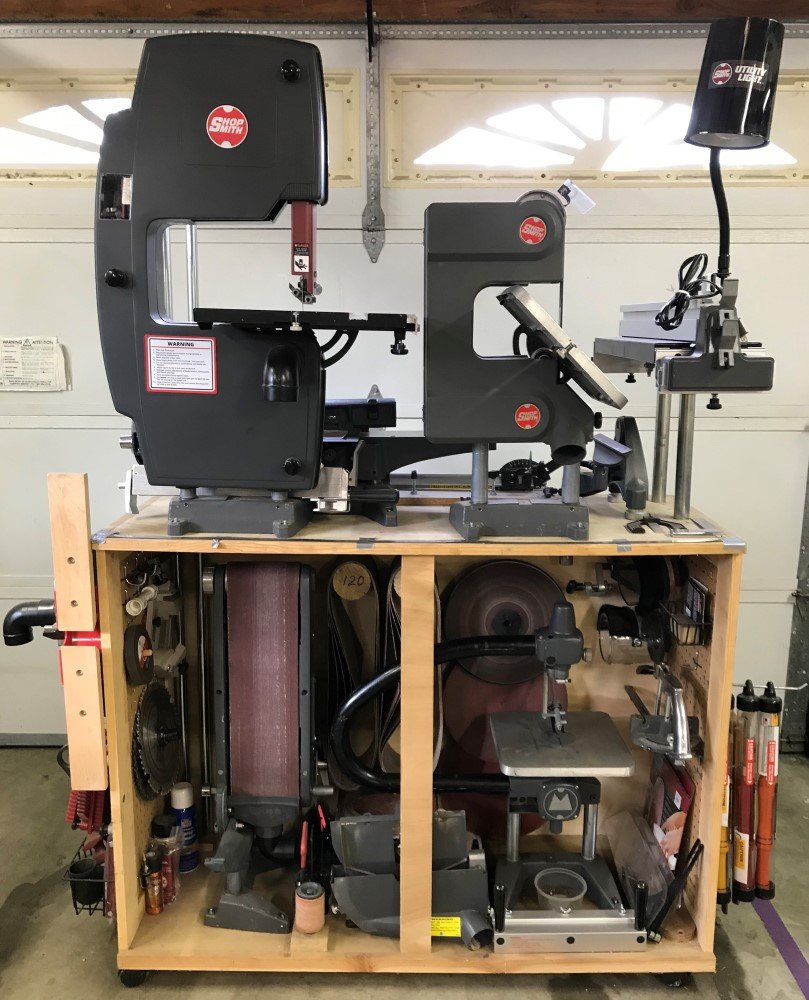 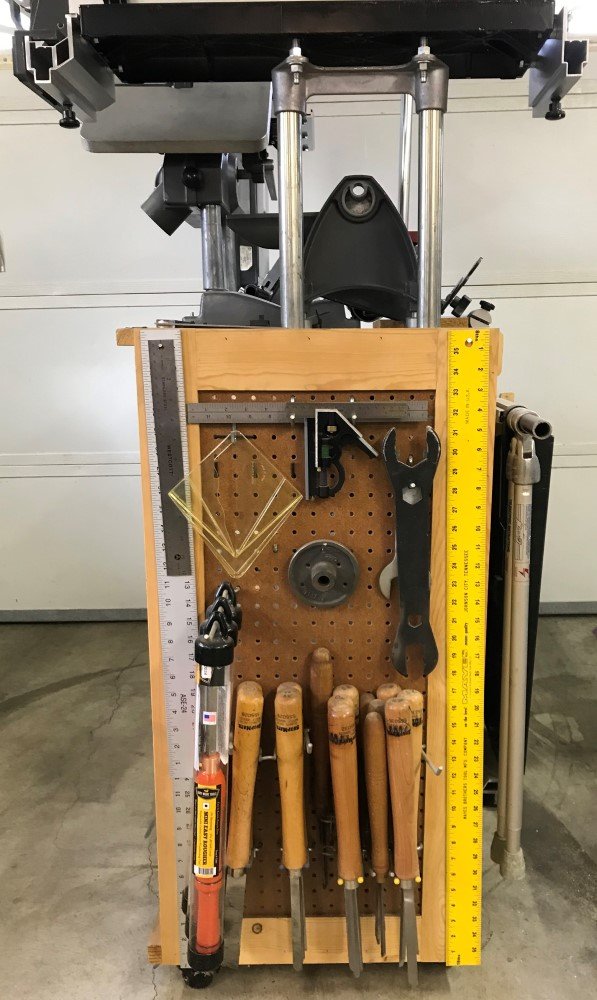 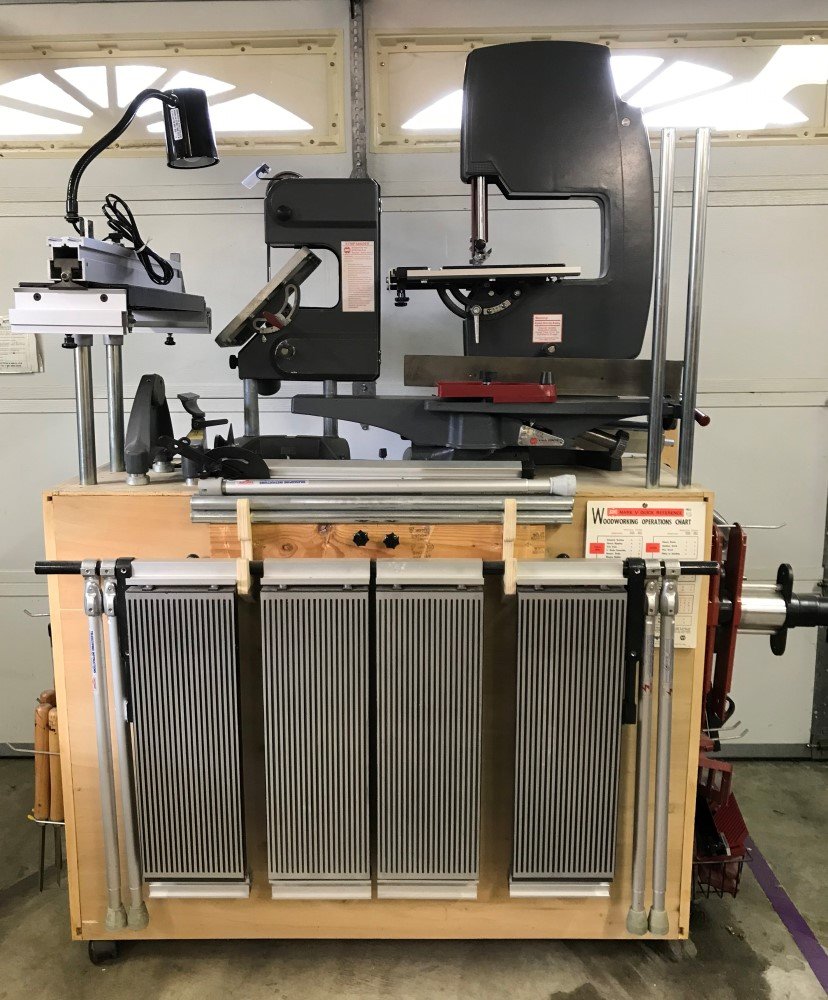 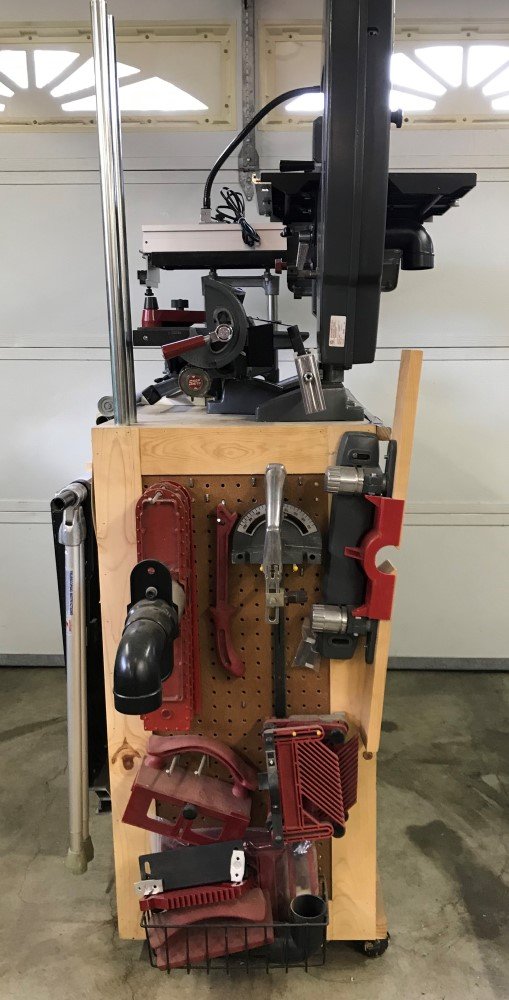 I remembered seeing Russ's storage cart and was going to mention it in an earlier reply but couldn't find its thread. I'd love to see its replacement when it's done ... it's the "H.O. Studley Tool Chest" https://mymodernmet.com/studley-tool-chest/ of SS accessories carts!
Top

I don't have a plan for an additional storage cart yet. I think I will work on restoring the Shopsmiths I currently have before deciding on what to make next. I do have additional storage mostly for older accessories which is a 5 drawer tool chest under the Model 4E Jointer and Model 10 Jig Saw shown below. Currently, I prefer portable storage over fixed storage on a wall. I do have a number of additional items that are not stored that well or are very accessible. Some Mark series and some Model 10. 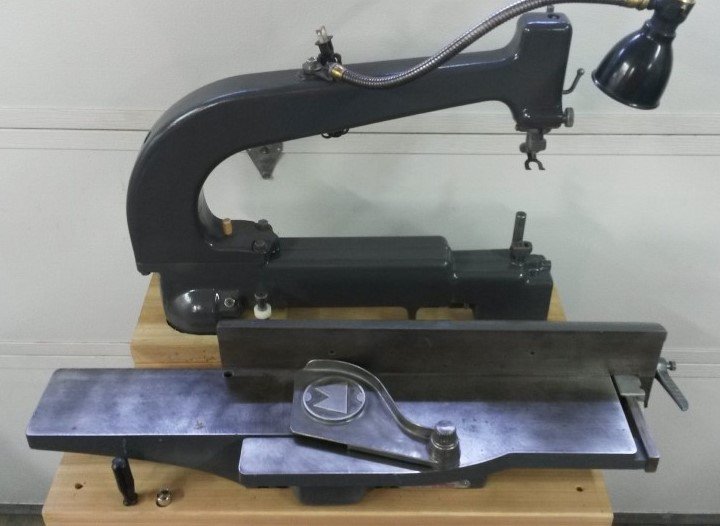