Today I thought about the Carriages for the Model 10’s. The thing I was wondering about was when did the change from version 2 to 3 occur. We know when the change from version 1 to 2 occurred since it went from double wedge way tube locks to single wedge way tube locks just like the Headstock. That was April 1951. The picture below shows all three versions of the Carriage. I took this picture of the bottom because it best shows the differences. Version 1 and 2 are the same except double or single wedges. Version 3 has less mass by having thinner walls and trimmed out areas of the walls. It weighs less than versions 1 and 2 but I neglected to weigh them while I had them out for the picture. This is the only one I have seen of the version 3 Carriage and I do not know the serial number of the 10ER it came off of. So, when was the 3rd version used on the Model 10ER? The March 1953 Manual lists the carriage as part number C 2349 which is the newer part number, post November 1951, for version 2. The version 3 Carriage I have is part number D 2349. Those of you with later Model 10ER’s may have the answer. 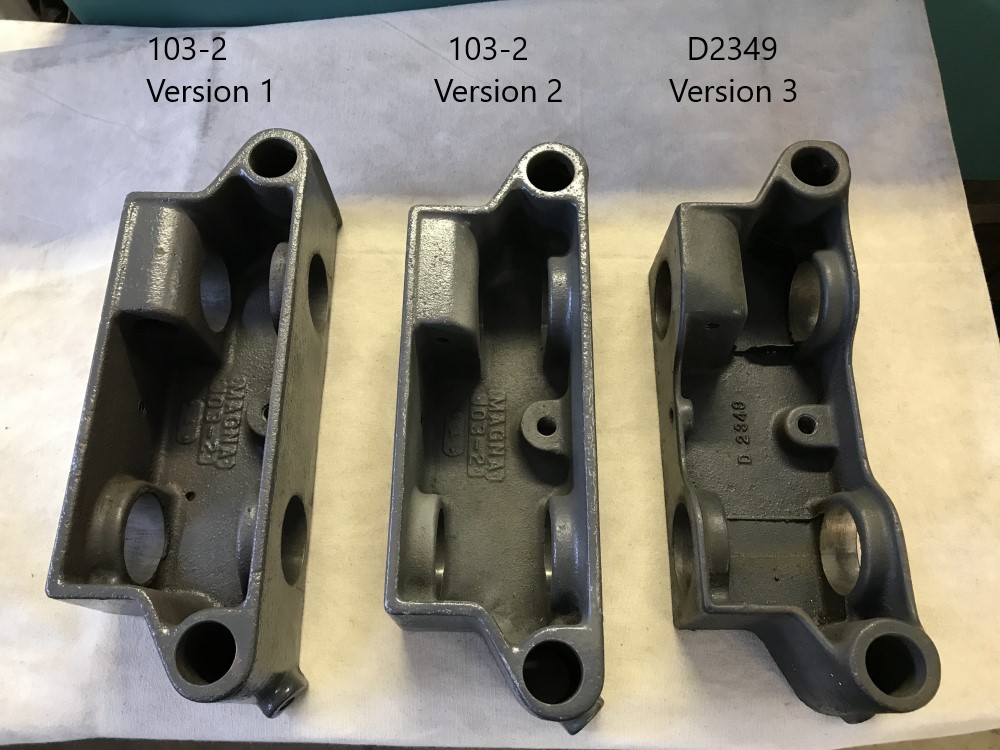 It should be noted that even though the part numbers changed in November 1951 many of the parts still had the old numbers cast in them for some time until new castings were made.
Russ

The Jig Saw made for the Model 10E and 10ER was introduced around 1950. It was first shown (that I have found) in one of the Rev. A Manuals and an early 1950 Accessories Catalog. It was Model No. A 34, item number 134-1X and after November 1951 item number 11 100. It was the first major accessory for the Shopsmith 5 in 1 tool. There are two versions that were made with the second coming out by early 1951. The only difference between the two was the Lower Frame Assembly, it’s cover plate and 4 or 2 screws for the cover plate. All other parts were the same except two versions of the Table Insert which appears to have changed at the same time as the Jig Saw itself. Those were the closed Key Hole and the later open Key Hole Inserts. This accessory did not have serial numbers so it is difficult to tell how many Jig Saws were made. The Jig Saw was discontinued with the Model 10ER and replaced by the 18” Magna Jig Saw Add-a-Tool (later known as SPT) for the Mark 5 which could be mounted on the Model 10’s with the Power Mount Adapter Kit.

The original Lower Frame Assembly was, unfortunately, hollow throughout the frame. Sawdust could enter the frame through openings and make its way to the gear box area. The later version corrected this and added some belt protection too. I have owned 3 and so far, restored and sold 2 of the original versions and found sawdust in the gear boxes. The third is disassembled and awaiting restoration. I have restored 5 of the later version Jig Saw. Of course, restoring these presents the same problem of finding parts as when restoring the Model 10’s themselves. I have even fabricated parts or found alternate parts when restoring them. For one I made a replacement Leather Pump Seal which was pretty easy. Making a replacement Sabre Saw Rest was a little bit of a challenge not having a metal lathe. 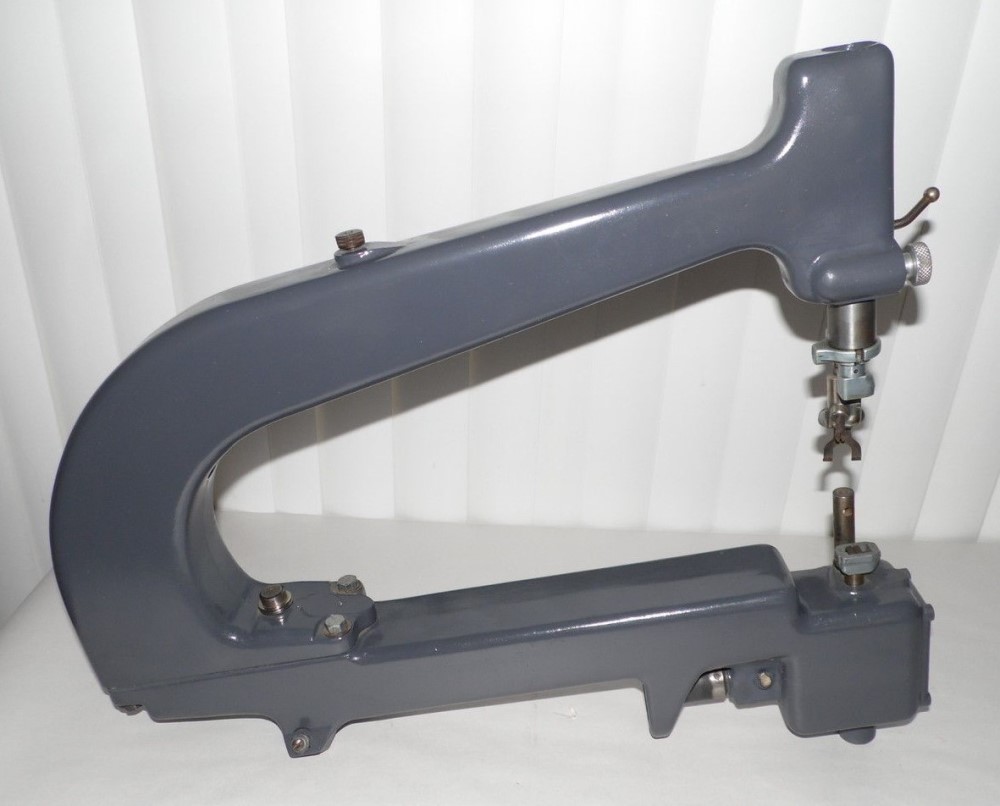 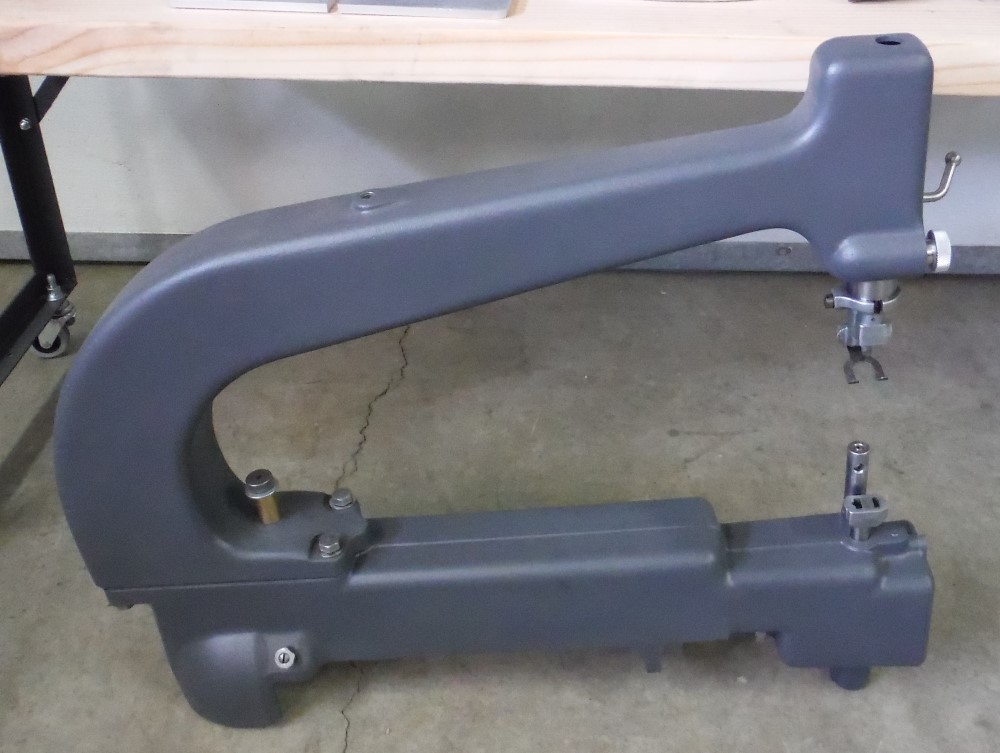 Before anyone comments, No, that is not rust on the mounting bolt. It is a brass spacer (not original) for using the Jig Saw without the upper arm attached for Sabre Saw mode.
Russ

If you are referring to the post I made on page 3, I was guessing on how the person got a blank plate to put a serial number with an X prefix on a plate. If the blank Logo Plate on the back of the demo headstocks all had the letter W upside down on them than that would not have been the source of a blank plate. X5010 is the only X prefix serial number I have ever seen. It was an early 10ER for sale here in Oregon with a serial number much lower than it should have for a 10ER with it's version of the headstock. Unfortunately it remains a mystery.
Russ

Yes, the early 10E Logo/Serial Number Plate has the M in Magna and Model that look like an upside down W. It appears only on the very early ones with serial numbers below 18000. 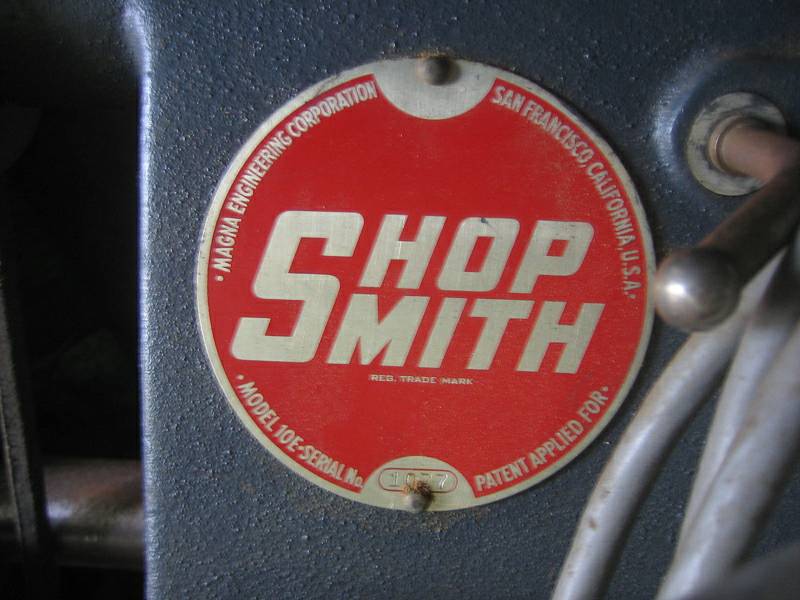 The Plate with the X in the serial number has normal M's in Magna and Model. It is a Model ER plate with the R prefix painted on the plate followed by stamped X5010. 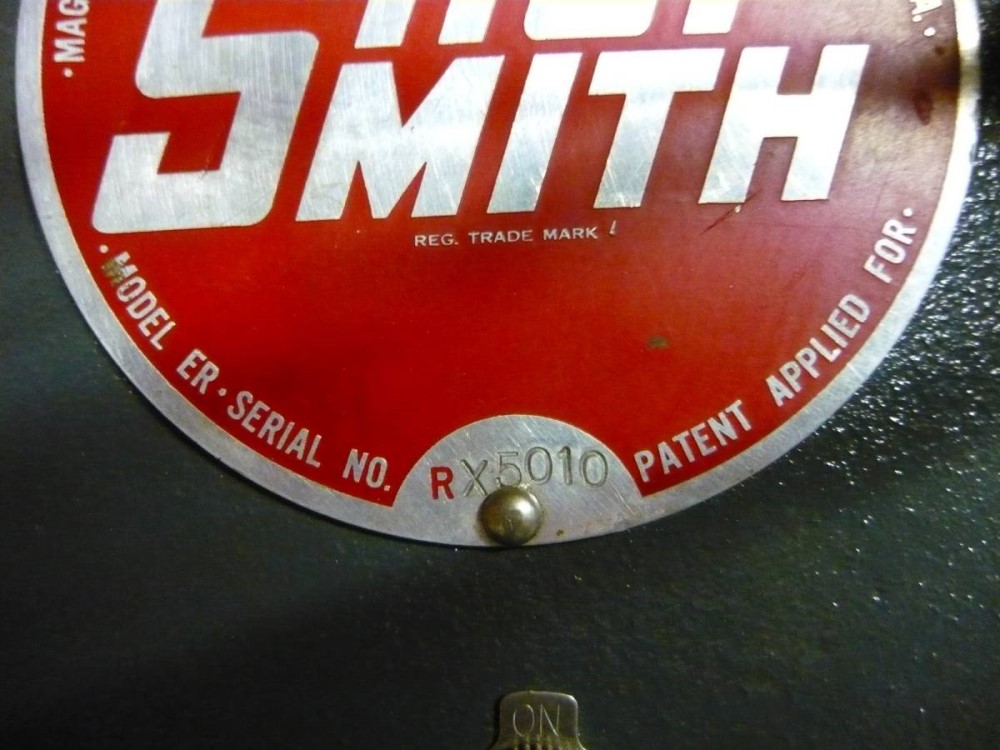 I was looking at ebay the other day and something caught my eye. It was the wood extension table, bar and bracket assembly from an early Model 10E. What I noticed is something I had noticed on S/N 1033. The holes in the wood for the bolts/screws to hold the bar and wood to the bracket were the same diameter as the holes for the extension pins that hold the fence in place. These larger holes do not allow the bolts/screws that holds the bar to the bracket to also hold the wood table to the assembly. Also, the bar with it includes three smaller holes to attach the bar to the wood with smaller wood screws from the bottom. It is something I first noticed when I restored S/N 1077 but that 10E did not have the original wood extension table with it when I purchased it. A new replacement wood extension table was made using a later wood extension table I have as a pattern. The later wood extension tables have smaller countersunk holes for a flat head screw to go through the wood, the bar and the bracket to hold the assembly together thereby eliminating the need for the three smaller screws to hold the wood to the bar. What I thought may have been a change made to those holes in the wood table from S/N 1033 by a previous owner appears to have been original. I have noticed the original wood extension tables that have come with 10E’s I have purchased are generally pretty beat up and sometimes have extra holes drilled in them. The picture below is the two versions I have of the Wood Extension Tables. The top board is the later one and the lower one is the early version. Only the two pairs of holes at the top edge (in the picture) are the original holes. Others have been added for whatever reasons the previous owners wanted them. 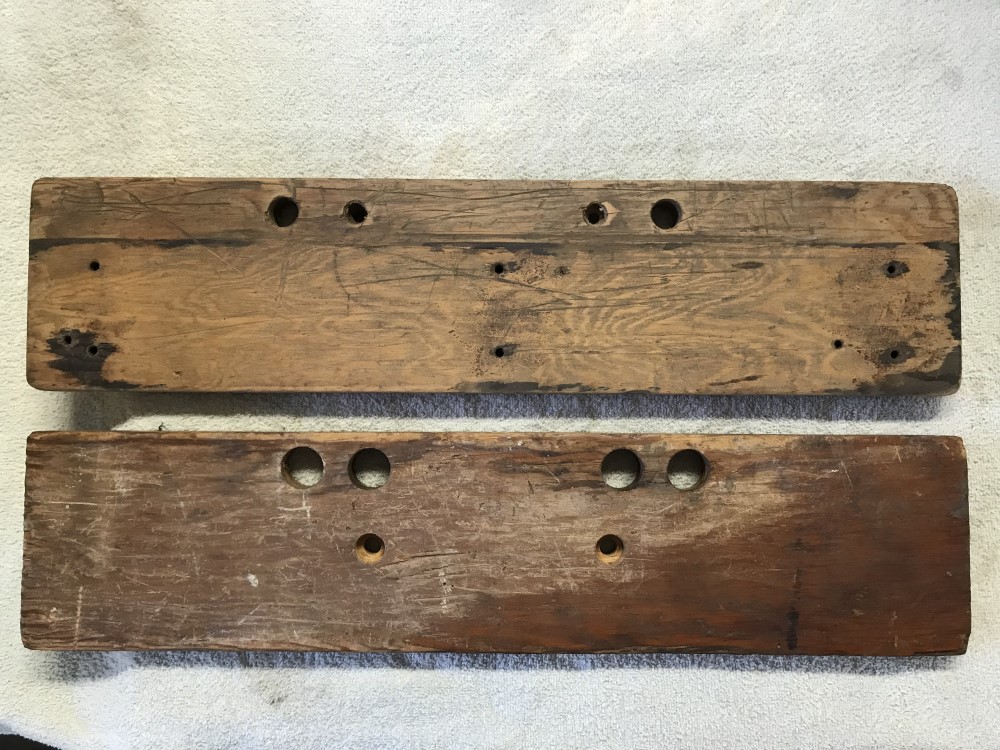 Are those the original boards? If so, they are in the best shape I have seen any of them in. The pictures shows a complete assembly for the Wood Extension Table and what I was referring to as the later one. On the bottom view picture it shows how the board, bracket and bar can have slightly different angles. This allows aligning both the fence and wood table to the saw blade. The fence attaches to the extension table using the posts and wing nuts.

When I get a chance I will have to put an early one back together for a picture to post. I will add that here in an edit when done. 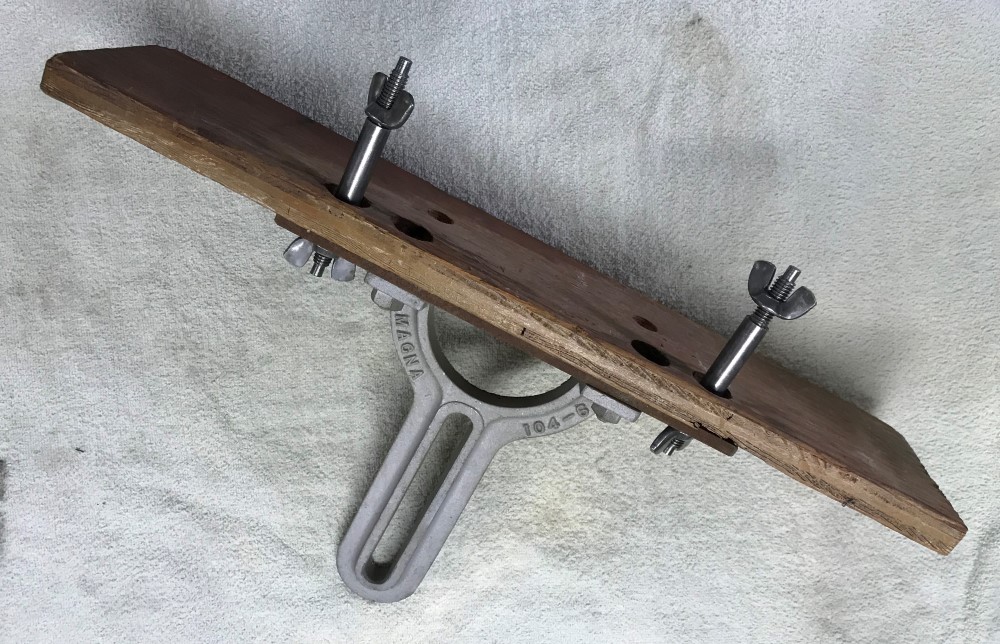 I said above in the original post about the Extension Tables that there were three wood screws that held the bar to the wood but after closely looking at two of this assemblies boards it appears that only the two outside screws were actually ever used. Neither board has a hole for the center screw.
Last edited by chapmanruss on Mon Sep 14, 2020 3:31 pm, edited 1 time in total.
Russ