As we know there were many changes to the Model 10's during their production. Other than the 2 Way Tubes being used instead of a single post the Headstock does look and function like a Drill Press and as you point out the prototype used just that. Using off-the-shelf parts where possible would make startup on a new tool easier. Changing from off-the-shelf to their own designed parts would explain some of those changes. The change in the Quill Collar was done as additional accessories were made for the Shopsmith Model 10E. The Mortising Attachment can fit on the Quill if the original Collar is moved back to expose the end of the Quill to clamp the Mortise onto. This does reduce the Quill's travel for drilling and repositions the arbors in relationship to the table slot unless moved back to it's original position after the Mortise is removed. The redesigned Quill Collar has it own clamping space and eliminated these issues. If the original Quill Collar was an off-the-shelf part the redesigned Collar was an improvement for the Model 10E. The Depth Gauge itself is another item that looks like something from a Drill Press. It was likely from that same off-the-shelf supplier as the Collar.
Russ

When I started this thread, I called it Shopsmith Model 10’s What When and Where which I believe I have covered pretty well but a good reporter covers the what, when, where, why and how. The why for the Shopsmith I believe is well known. Hans Goldschmidt saw a need for a tool for the home user. Something compact and multifunctional. Now I want to cover the how. In this case how many Model 10E and 10ER were actually made. In one article I have read Skip Campbell had estimated around 125,000 Model 10 were made from 1947 until their production ended in 1953. Skip knows a lot about the Shopsmith Model 10E and 10ER including the history. His research started long before mine did. The information I have gathered leads me to believe there were many more units made than he estimates. Using the serial numbers I have seen more than 45232 Model 10E’s were made and more than 111971 Model 10ER’s were made. That’s more than 157203 Model 10’s made provided there are not gaps in the serial numbers used. Below are the numbers I used from what I have seen for each group of serial numbers.

According to the Shopsmith Sales History from Book titled "How to Write a Winning Business Report" By Joseph Mancuso, 117197 10ER’s were sold in the fiscal years from 1949 – 1950 to 1953 – 1954. That’s over 5000 more Model 10ER’s made than I can document. Of course, there are serial numbers outside the number ranges I listed above. Some of those numbers could make up for the difference between my number and the Shopsmith Sales History number for the 10ER. So how many Model 10’s were made? We may never know the actual number and I have no real estimates for those made outside the US. Remember they were made by a company in Australia too.

I am glad to see there are still so many around and working. What I do like best about the Shopsmith Model 10E and 10ER is their continued popularity after being out of production for almost 67 years now. I know others of you share my appreciation for these tools that were truly made to last.
Russ

I neglected to add this to the post above so, for those that haven't seen it attached below is the PDF of the Shopsmith Sales History.

Quite often I see Shopsmith tools, accessories or parts listed for sale at online auctions listed as “rare.” In most cases it is about as accurate in the description as calling something “vintage.” I often wonder how the seller defines rare. To me it is something that few were made or are still available. With somewhere around 150,000 Shopsmith Model 10E and 10ER tools made I would not call them rare. There are a couple of exceptions like the factory chrome plated special Model 10's like Everett now owns 1 of or a Demo unit with the extra label. Regularly I see tools or accessories listed as rare. The ad title reads something like “Rare Shopsmith Model 10E.” Well in my previous post I stated that I found there were more than 45,000 Model 10E’s made. The only regular production Model 10E’s I would possibly consider as rare would be any of the original 250 (S/N 1001 to 1250) shipped out to West Coast Montgomery Ward Stores in November 1947. It is hard to tell just how many of those are still around. I know of at least one that has been parted out.

The Speed Changer is often listed as rare and although we have really no way to know at this time how many were produced it is a popular item that does go for a high price at around $150 which is over 10 times its original price at $13.95. Most things loose value as used but these certainly have not. It must be that vintage thing again.

The Magna 4” Jointer Model 4E that came out about a year before the Model 10ER was discontinued had around 10,000 produced and is frequently listed as rare. Okay, by now maybe they can be considered rare. Certainly, less of them are available than the Speed Changer.

There are items for the Shopsmith Model 10’s that do deserve to be called rare. One is the Lower Saw Blade Guard which I have only seen one of them. Another is the Lower Belt Guard of which I only know of 2. A third is the Shopsmith Cover like the current tools covers but made of canvas for the Model 10’s. I purchased that rare item NIB a few years ago and haven’t seen one since. It fits nicely over and protecting my Model 10ER. There is other less commonly found items for the Model 10’s. The Key Switch and the two step 2”-3” Headstock Pulley come to mind. Consumable items like Polishing/Buffing Wheels, Wire Wheels, Distic or Liquid Sanding Disk Adhesive and Magna Lube are hard to find in a useable condition. Even after the Model 10ER was replaced by the Mark 5, Magna made the Power Mount Adapter Kits for using the SPT’s on the Model 10’s. Either of the two kits can be hard to find especially as a complete kit. Most often seen is the “A” Adapter and/or the “B” Adapter for sale but even harder to find is the Special Drive Hub Headstock Pulley.

When seeing “rare” in a description in most cases it is simply the seller trying to get more interest in what they are selling. The buyer feels it is “rare” so it must be something to get otherwise I may not get another chance later. In most cases that is simply not true. Rare or Vintage is used with other Shopsmith tools of varying age. Some may indeed be rare while others are certainly not.
Russ

I agree with what you have said Russ. Speed changers are not that rare. I have 5 10ER's here and 4 of them came with speed changers. I bought one on eBay for the 5th one. The key switch is very rare. I snagged the only one I had ever seen at the time on eBay. There is (was) one on eBay now. That makes two. I have two lower pulley covers. One I got from Skip Campbell that is new old stock and has never been installed. The other one was from eBay. I have only seen maybe one or two others so I would consider them rare. 4E jointers come up from time to time. I have two here with the headrest and the hinge plate. The hinge plate I would consider rare. The tabs are prone to breaking. The 5" pulley and shaft adapter kit for the jointer is rare. I have one complete set and that is the only one I have seen. The MK5 SPT adapters are a bit rare. I got the complete set on one eBay buy but you almost never see the complete kit. There is also the flex shaft and the goose neck utility light. I have two of each but I would consider them rare. You very seldom see them on eBay.

Then there is the elusive lower saw guard. I have seen pictures and missed the only one I have ever seen for sale. It is the rarest of rare model 10 items. I would pay a premium price for one. It is interesting that Magna made that guard for the 10ER but the MK5 when it came out didn't have one even as an option.

Having said all that, it took me years to get what I have of the rare/semi-rare parts.
John & Mary Burger
Eagle's Lair Woodshop
Hooper, UT
Top 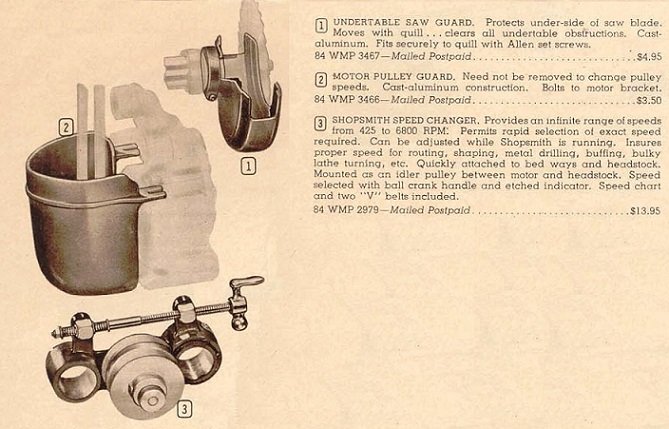 "The key switch currently for sale looks a little sketchy for actual use and it is in line with a regular toggle switch. It make me wonder how it was mounted."

I have talked about the 4” Jointer originally made by Magna Engineering Corporation for the Shopsmith tools many times including back in July in this thread. First a little history so you don’t have to go back and read the earlier post. The Model 4E made for the Shopsmith Model 10E and 10ER came out sometime before the end of their production. My best guess on that is around a year or so before. It was designed to mount on a special Headrest and added a 5” pulley to the motor shaft. With the introduction of the Mark 5 the Model 4E 4” Jointer was replaced with the Model 620 4” Jointer. The 620 was the same as the Model 4E except the Base/Out Feed Table casting was changed to include mounting posts for the Mark 5. The Model 620 still included the mounting holes to use the Model 10E/10ER Headrest Mounting.

Thanks for the great information on the model 10s.

Not sure this is the proper place for my message, so if not, please excuse my inexperience, but-

I have a Model 10E that I will be getting rid of as I am not a wood worker and need the space in my shop. I could probably sell it pretty easily on Craigs list or one of the other buy-sell-trade boards, but am just curious if there is a collector out there that would be particularly interested in and appreciate this model/age of machine. I realize location is a limiting factor (I'm in the Wichita, KS area) so that may limit the interest, but would appreciate hearing if anyone is interested. If so, you can send me a private message and I can share more details.
Top
Post Reply
101 posts