Shopsmith Mark 5 What When and Where

Personally I would prefer a version without those inaccuracies.

I would prefer a more correct version of the Shopsmith Mark 5 history than the one shown on the website too. That is why I went through their version and made some corrections. Maybe I need to review it against other information I have found. As for Gilmer vs. Poly V and 3/4 HP vs. 1-1/8 HP they appear to have changed at different times. According to a different source I just checked they it changed to Poly V in 1961 not 1960. I believe that to be correct so I changed the year in the previous post. A few years ago I restored a 1960 Goldie made in October It originally came with a 3/4 HP motor which had a some point been replaced by a 1-1/8 HP motor. I can't recall which Drive it had, Gilmer or Poly V but that may have been changed too.
Russ

Yes the transition dates are not nailed down. I have always ASSUMED they were coincident. But then I also presumed they both occurred with the color change and that has been proved inaccurate.
╔═══╗
╟JPG ╢
╚═══╝

I had mentioned a couple of the changes made to the Mark 5 in my first post. The following is a list of some of the more notable changes to the Mark 5 and Mark V made over the years but is not inclusive of all the changes. That would be an extremely long list to compile. The Shopsmith history page in my previous post has changes listed in it too. Some of the following changes made to the Mark 5/V may not exactly match those listed on the history page here on the Shopsmith website. The change to Poly V was in 1961 not 1960 as reported in the history and is better supported by the information sources for the list here.

Even in the above list I have found a conflict in that one source has the change from ¾ HP to 1-1/8 HP Motors occurred in 1962 while another has 1961. 1962 came from information found on the Shopsmith website but the tools markings (vent plate) had the change in 1961. This does support what JPG believed all along. Thanks, JPG, for making me look further into this.
Last edited by chapmanruss on Thu Jul 22, 2021 11:58 am, edited 1 time in total.
Russ

My 1962 Goldie came with a 3/8" hard plastic stop ring. I have attributed the stop rod/nut with m10 and greenies.

The 1986 510/505? fence rail tubes changed from table tapped holes and screw access holes in rails as well as making the tubes slightly thinner wall , clearance holes and kep nuts for studs welded to the tubes and a relocation of the center screw/hole on the table.
╔═══╗
╟JPG ╢
╚═══╝

Again thank you for those corrections and additions. The information I gave came from different sources as was noted. Sometimes the tools themselves are the best reference. I just checked the pictures I took of the Goldie I restored and it has the ring too. For the Mark V 510 & 505 I have only had the later Fence Rail Tubes so I didn't realize the wall thickness changed and only knew about the mounting change which is the obvious one.
Russ

I have two or three related questions, trying to add clarity. I've recently seen a couple of Marks that appear to be 505 Golden Anniversary models. Obviously there are several ways to create something that looks like a 505 GA, I'm asking about new build only.

Now as to why that time period was picked as the 50th Anniversary is confusing to me. The Mark 5 was introduced in March of 1954. Fifty years would be 2004. The First Shopsmith, the Model 10E was introduced in 1947 so fifty years would be 1997. Did they kinda split the difference? It couldn't be that they subtracted the time it was out of production from the end of 1964 for the Mark 5 to back in production and for sale in 1973. Maybe it was when the Mark VII went out of production in 1968 that affected the time they chose. For some reason Shopsmith Inc. decided it was time for a 50th Anniversary and even had a 50th Anniversary Mark V Accessory catalog. It came out in March of 2001 and had the 10ER, Mark II, Mark VII, Mark V Model 500, Mark V Model 510 and Mark V Model 520 on the cover. Someone missed the fact that the Mark II is actually the Mark 2 but that's not the first time Shopsmith Inc. has used numbers and Roman numerals interchangeably. It was an accessory catalog and did not include sales information for the Mark models in it.

The date range for the Mark V 505 would start the same time as the 510 and went sometime after 2007 as I said above. I do not know when Shopsmith stopped selling the Model 505 but it was some time before the Model 510. Maybe anyone that purchased a Mark V 505 after 2007 can let us know it's date code.
Russ

Bringing up the 50th anniversary edition makes me wonder if Shopsmith will have any big plans for the 75th anniversary (whenever that date may land) coming up?

Russ, my 520 has a both 2005 serial number and a 50th anniversary nameplate. There was a thread about this some time back, and IIRC mine wasn’t even an outlier. Speculation was that the mothership bought a batch of the golden anniversary nameplates, and simply continued using them until they were gone. 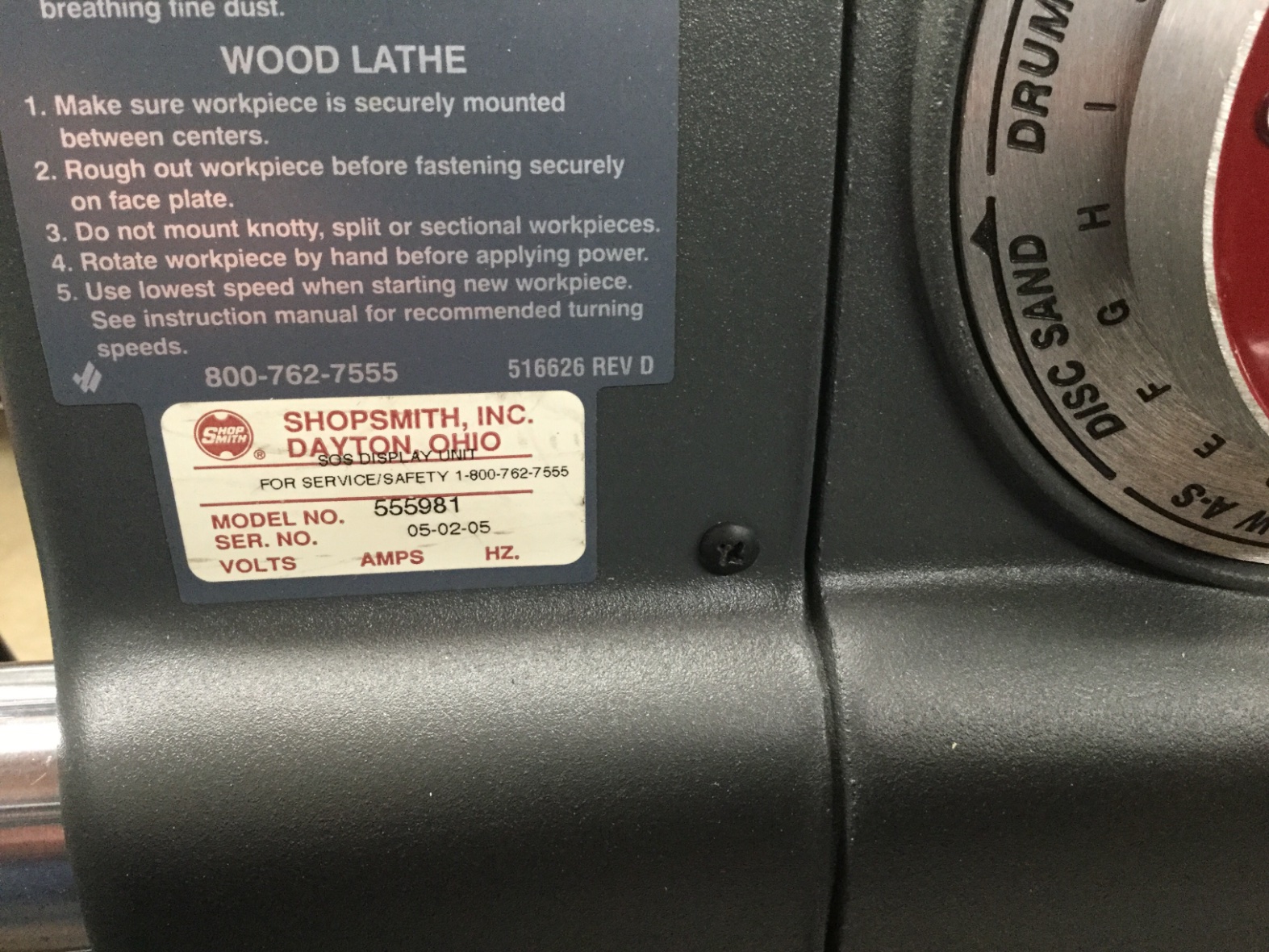 The really odd thing is that this sticker ID’s my headstock as a display/demo unit. And a different sticker proclaims that it was built especially for Johnny someone!