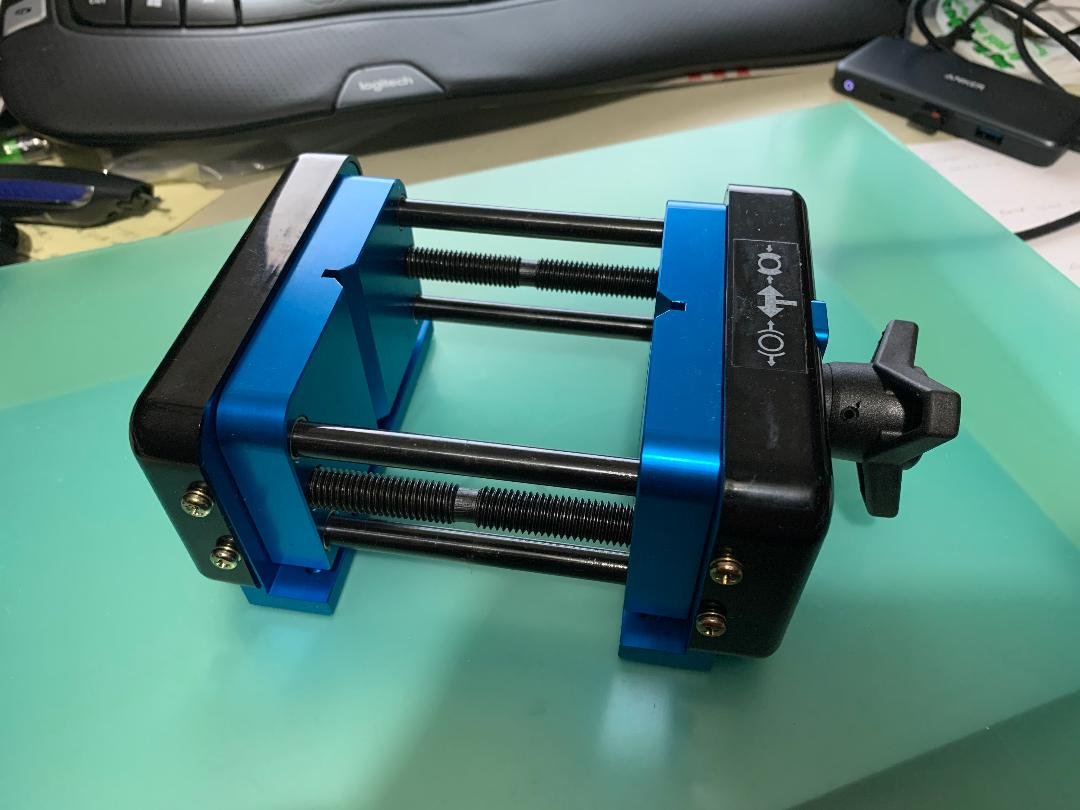 You can find it here:

This is a Christmas gift to me from me. I have no pressing need for it or a particular project I want to try it on. It is a tool that I do not have in the shop so I expect that I will find things that this will be perfect for. If I find some things that need review after I have had and used it for a while I will add them to this thread.

The first thing most of you will see is the cost. Yes even I was hesitate at paying that much for this tool. However if you shop Rockler they often send you coupons or some percent off and free shipping after $39. In this case I had a coupon for 20% off and yes that got me the free shipping. Of course depending on your residents there might or might not be sales tax added on, here in IL that is certainly true.

Since I've been reluctant to do too much in store shopping I ordered it without having actually having it in hand. The box arrived and I was pleasantly surprised by the weight. I have to guess that it is over 3 pounds, more steel in it then I had guessed. It seems well made and I look forward to making a base for it. I did not buy the Portable Drill Guide so it will more then likely get mounted to a plywood base and stay there forever.

If you look at the specks it is clear that there are some limitations, the opening is maxed out about 3" square, this allows like pens and bottle stoppers to be held but I don't normally drill that way..... So I'm already thinking how I might make some modifications but that will be later.

If anyone with more experience with the vise wants to chime in please do so.

Congrats! Looks nice, but I am wondering why is it so heavy? Certainly a benefit for workholding having more mass, but a pain to lift/store, etc. Surprised because I would assume all the blue bits are anodized aluminum that Rockler uses a lot. Guide rails and screws are probably steel, but isn't the bulk of the vise aluminum? Just curious. Enjoy...

After checking the spec sheet again I see they have listed at 3.5 pounds. The blue parts I'm sure are all aluminum and the covers on each end are plastic. The 4 bars and dual threaded rods are steel and I have to guess the gear train as well. I have to guess there might be a steel plate in there as well to get the weight to this point. I personally thing the weight an advantage.

The jaws are not steel and I doubt they are tempered but who knows.

Finally got around to making a base for this vice. While it works on this drill table I have plans for a different top once I can work outside again.

As you can see the vice is located and held in place by 20mm dogs, one on each side. The drill table only allows it to mount in this orientation, the new top will allow the vice to mount either direction and maybe even at a 45 degree angles.

When I purchased this jig I wanted the feature and wasn't really planning on use it for drill pen or other blanks with it. I have a set of jaws for my Nova chucks that allows me to drill on the lathe and that has been my go to method. Since I have the vice and had the other shopsmith set up for other things I thought why not give it a try.

As expected it works well for holding the blanks and since the drill press has been adjusted to be vertical to the table the holes come out centered as best as the they can. It does have a few draw backs which I might want to adjust my work flow for or maybe add some features at a later time to deal with them.

First this is not really a complaint but rather something to let you know about. When drilling in the horizontal lathe position the chips when extracted fall away. In the vertical drill press mode the chips become a pile. The pile has little places to go and even on a short drilling operations you have a mess in the making.

As you can see here even after drilling this short blank it is a mess: 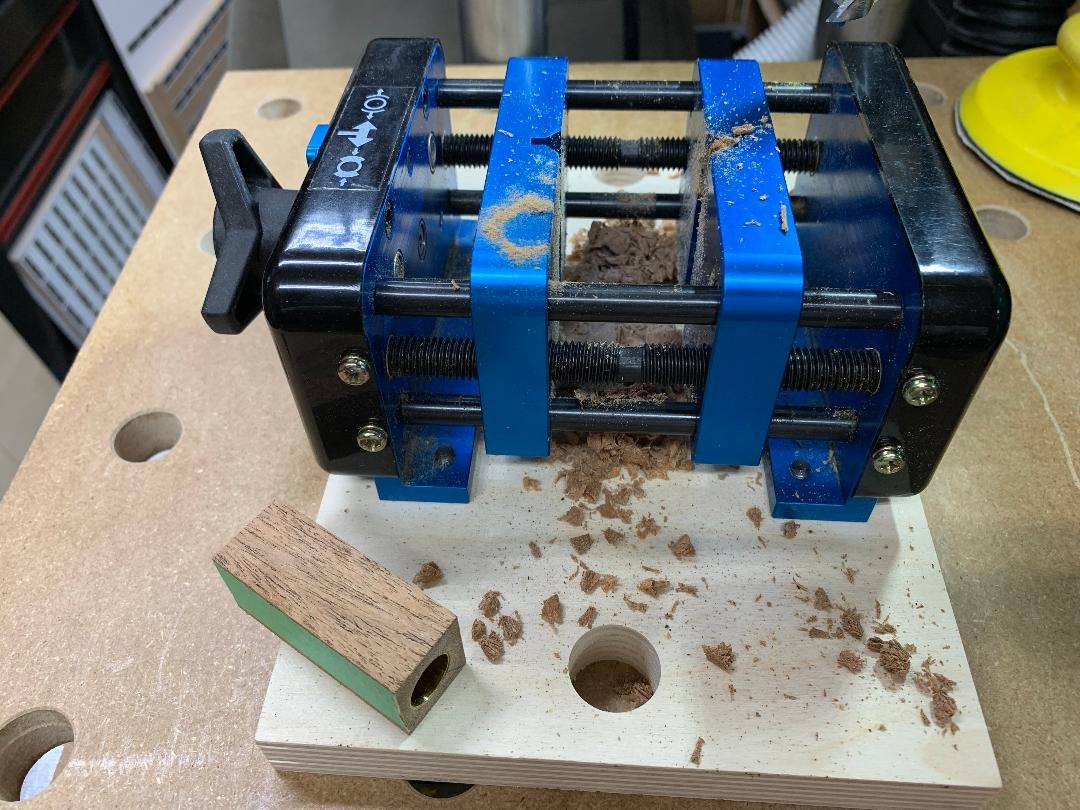 I have been using the Rockler vacuum attachment with the bent nozzle to such it away after drilling. 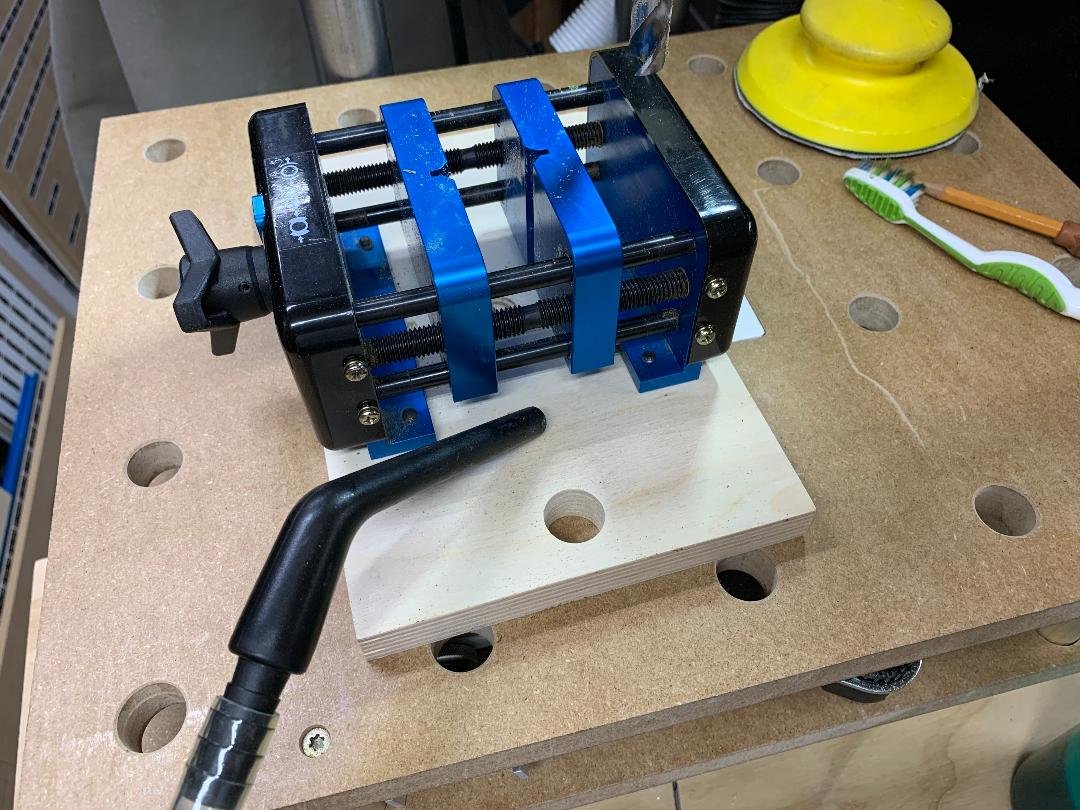 And then, maybe because it is new but the dust/chips want to stick to the threads and make it difficult to adjust. I use a tooth brush to clean them for now and might attempt to clean them at some point and go to a dry lube. 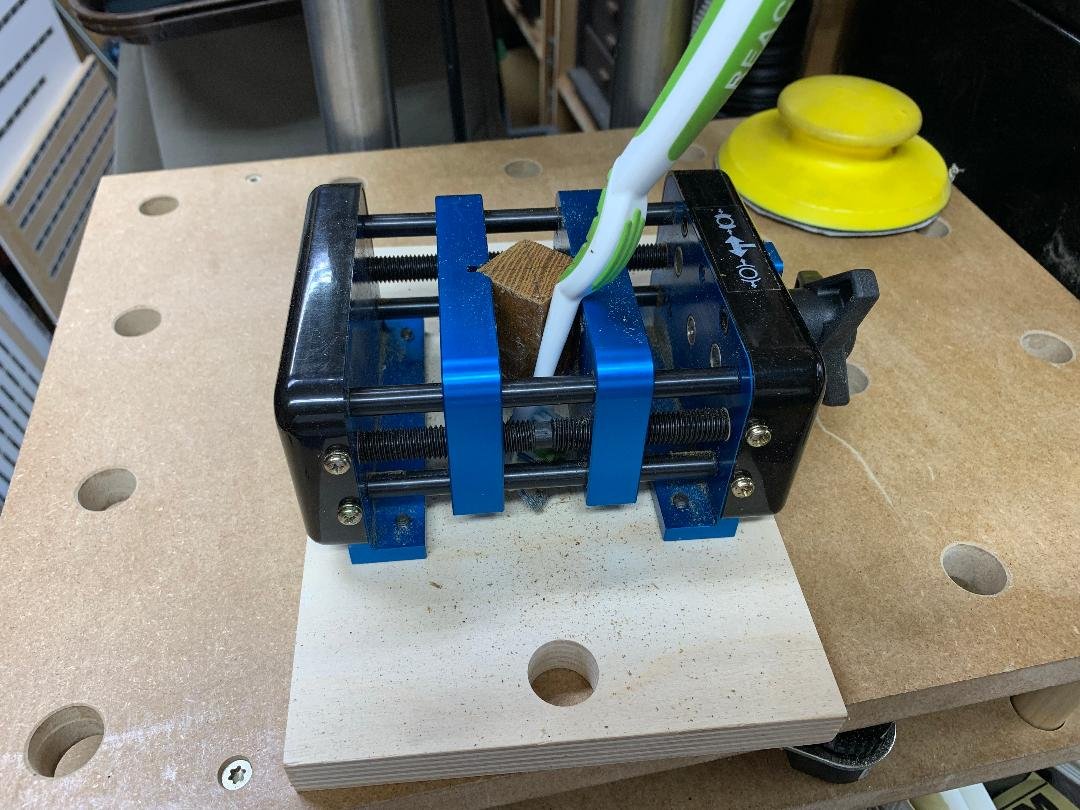