Five years ago this thread got me interested in the Zyliss vise. I finally got around to buying one. The aluminum was heavily oxidized and there was significant rust on the rails, but it showed no signs of real use. Lots of elbow grease later and it is like new.
I also modeled and 3D printed the upper and lower soft jaws.

Then I went down a rabbit hole of looking at all sorts of Zyliss variations. Some have the quick release as mentioned in this thread. Some have horizontal slots on the jaw bases, and some have a lower slot for mounting to an optional pivot plate. The table clamps had at least three minor variations. Various sources claim the vise was developed sometime in the 50s or 60s as a portable tool for the Swiss Army. It was later mass marketed as a hobbyist vise.

And that is only is the Zyliss branded version. There are/were countless clones and/or licensees with various extra parts or features. So far I've found Grip Master, Vunder Vise, Z-Vise, Z-Vise 2, OZ Vice, Extra Pair of Hands VIce, and SwissRex. SwissRex later produced a functionally similar, but different looking version. 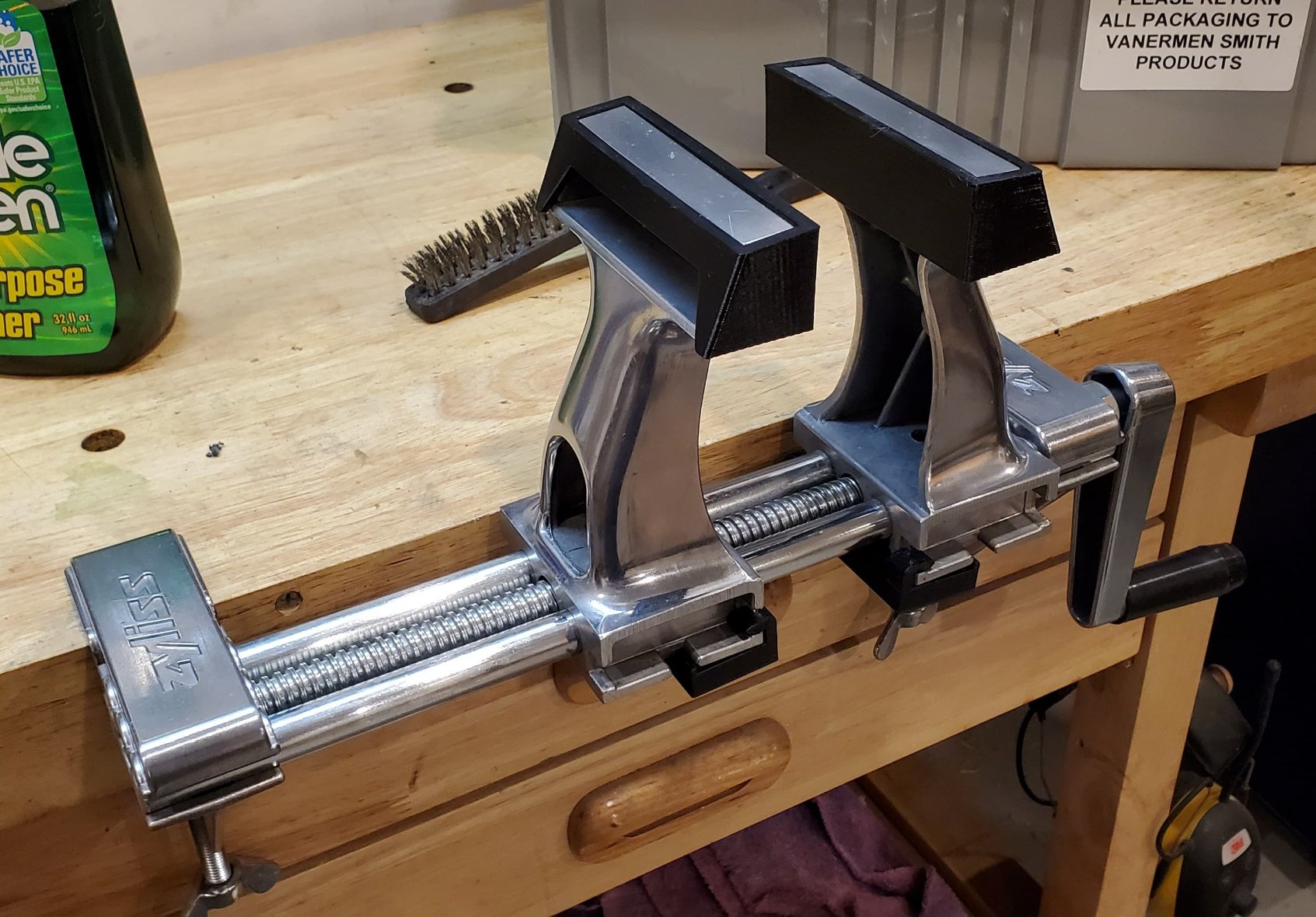 The original vise patent was filed by Zyliss (Zylyss) founder Karl Zysset in 1957. Karl, originally a bicycle mechanic, is most famous for having invented the garlic press.
https://patents.google.com/patent/CH354399A/
Top

I have one of the clones. It has been in constant use for several years. I don't remember ever using any of the attachments. I'm amazed at how well the claps hold it to my bench.
--
Robert Keeney
Tallahassee Florida
Top

Great review/topic by Dusty!
I have an original Zyliss Vice. It was gifted to me two years back in the original box with the instructions, plus a quick review card for on the fly mounting. Here is what I know...
Mine was bought in 1979. They were really big at county fairs and that sort of thing. I have the original receipt for $289.00. That was in 1979.... Fast Forward! The distribution guy now lives in New Zealand. The ones being sold now are not nearly as strong/good as the originals that were Swiss made. Back in the day the Zyliss Vice was King. I read an article several years back where a motorcyclist had one and convinced his buddy to buy one. They busted the new one right out of the box. From what he said they were really cranking on the new one. These dudes did a side by side comparison and found multiple differences in the castings. They had cut Manufacturing details that made them prone to breakage. The new Zyliss Vices are sold in a blown molded plastic case. The newer models also came with additional accessories so the vice could be set up as a drill press among other things. Since the jaws are made of aluminum one needs to be mindful so you don’t damage the face of the jaws. Mine has a set of plastic jaw covers the I always use. The new model comes with a set of plastic jaw covers as well as sheet metal jaw covers that snap on. I fabricated 3 sets of metal jaw covers for now and future needs. I tried to buy just the new case from the dude in New Zealand. With shipping it was insanely priced. I ended up storing mine in an older Hip Roof Craftsman tool box. It fits perfectly. The originals are excellent tools. The crank arm on the vice is most excellent. How can you know the difference? I do not know. Other than the one I own I have never seen another one. They are VERY expensive but worth every penny (so I am told). I don’t know how to post up a photo or two. SORRY!
Thom Schuck
Portland, Oregon
Thom Schuck

I have an original Zyliss vice that I bought at one time. It had a set of plastic jaws and a set of metal jaws for the upper jaws. I almost want to say that there were two sets of plastic jaws, one was flat the other had V cuts for holding round items. They also had a lathe set up that used a drill. The workbench my husband bought me one year is too thick to attach the vice to so I had to add a strip on the sides to use it. Mine has been through several moves, both in and out of the military. I am not sure where all of the parts are now for the lathe or the jaw covers. I know that one of the plastic jaws was broken. Even though the last move was a few years ago now, I still come across items that someone just stuck in a drawer someplace that should be in a different area of the house. Unfortunately most of these items were things for the shop that no one else knew what they were or where they should be so just stuck them someplace and forgot about them.
Brenda

I continued my fascination with the Zyliss vice and its history by buying an original wood-handled model branded with earlier "Zylyss" spelling.
Lots of minor differences such as the design of the handle arm, lack of quick-release, and lack of notches in the base for mounting accessories such as "lower soft jaws". There are also spring pins holding the way bars to the right jaw.
The table clamps have a smaller mouth and the springs are much weaker. Once I got past the dirt, paint, and corrosion I found the overall original finish was not as refined as my later model. I smoothed some of that with progressive grits before polishing.
When this arrived nothing moved. It took me hours just to get it to move, and a few more to disassemble. 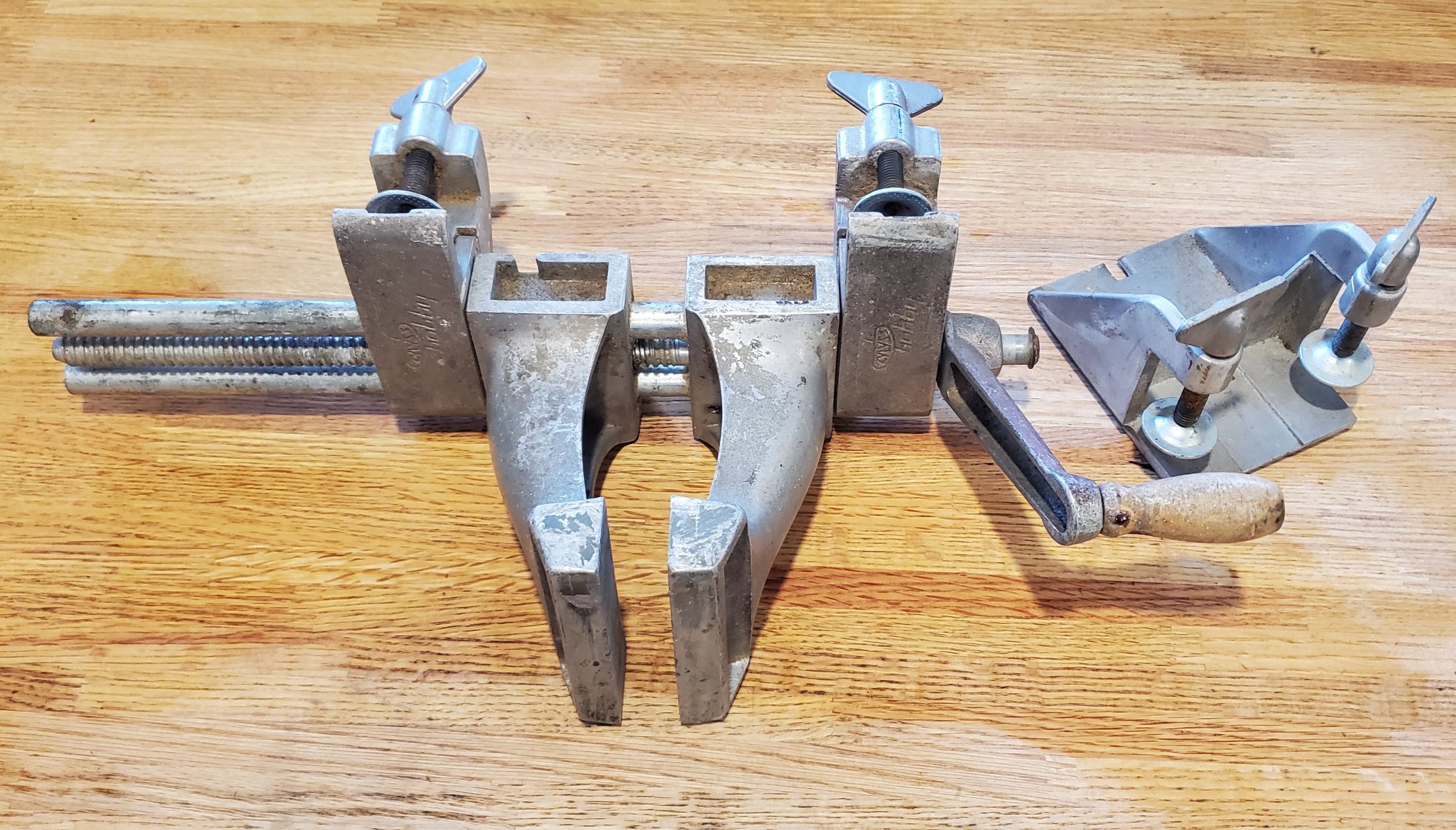 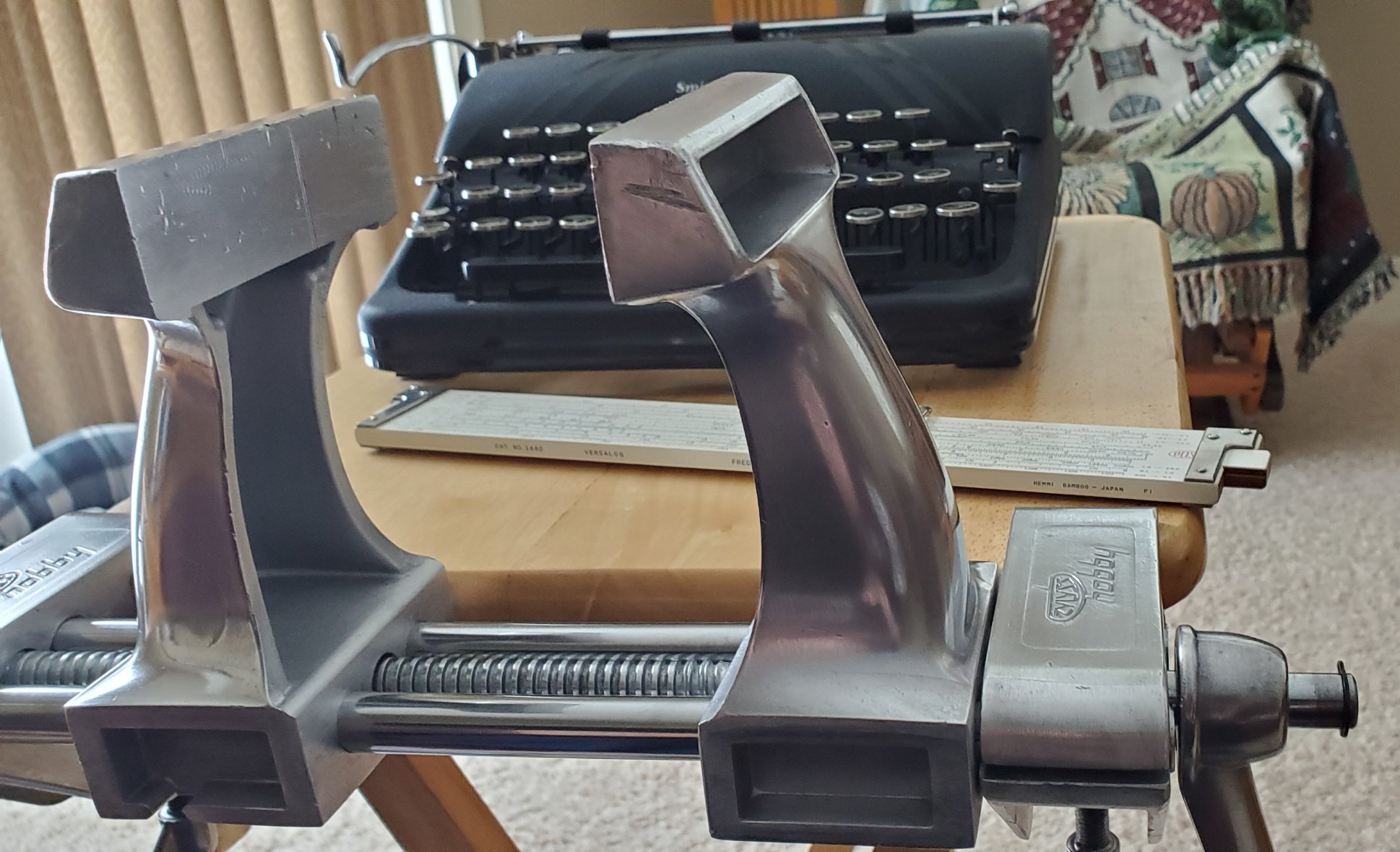 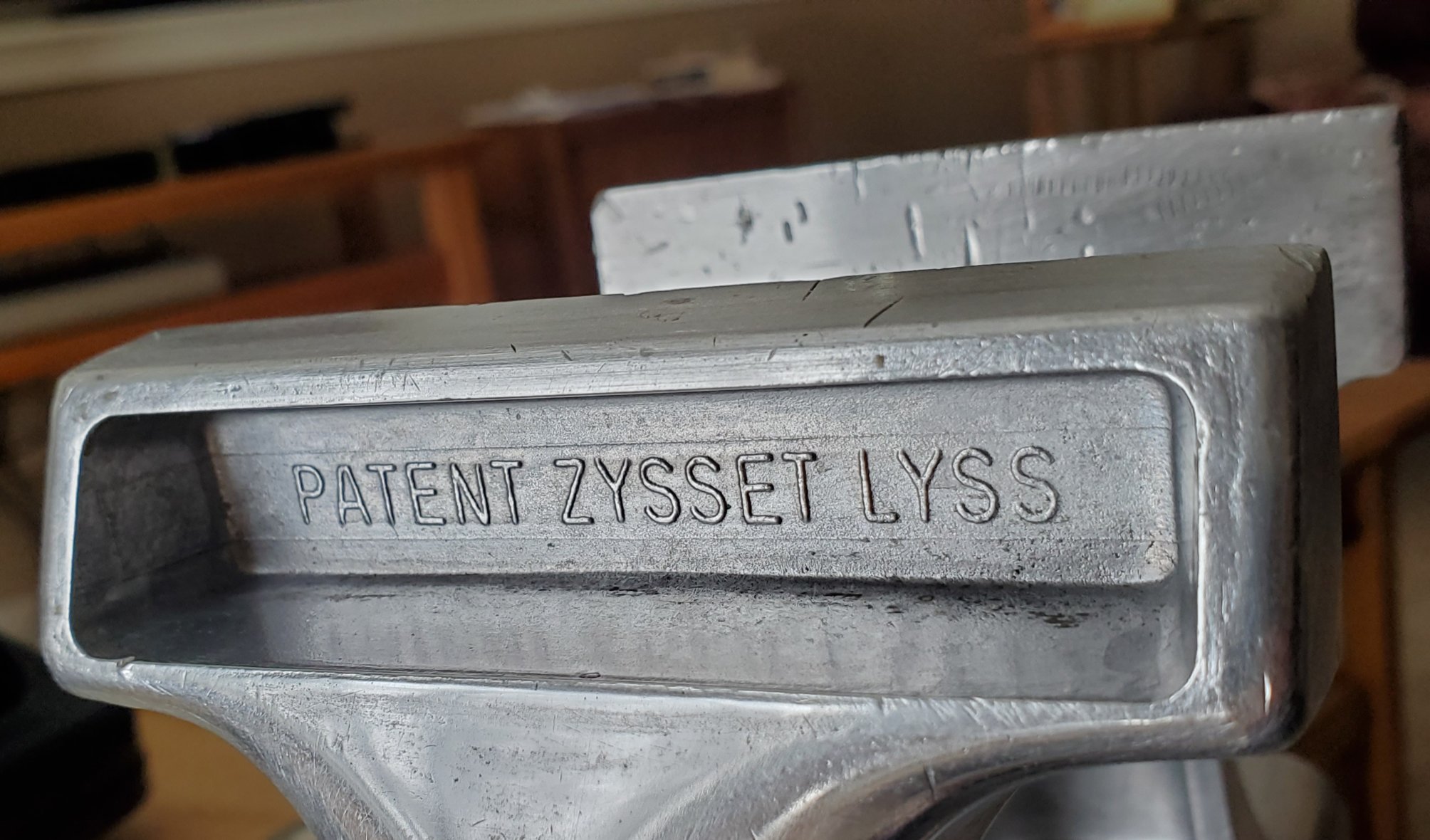 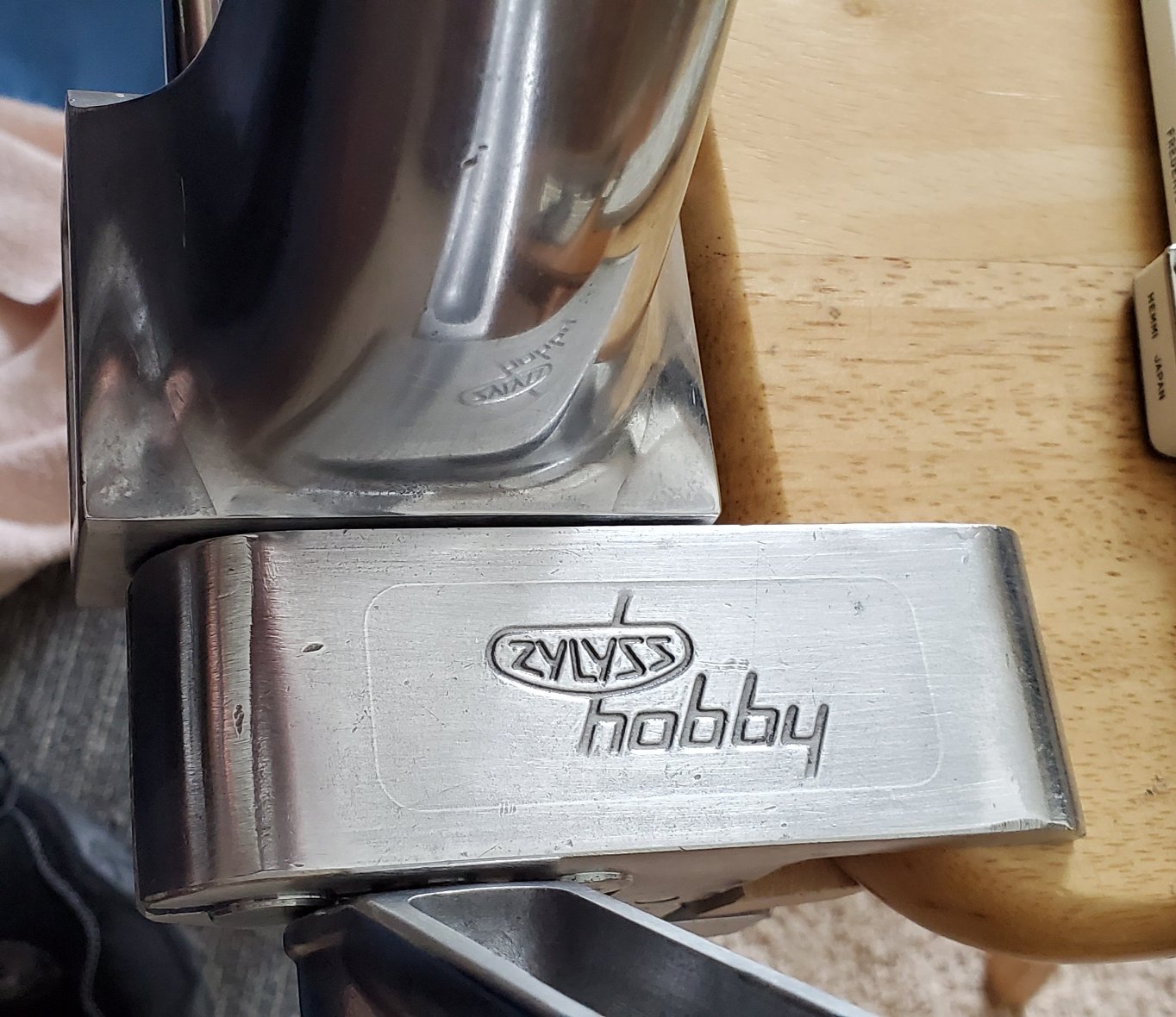 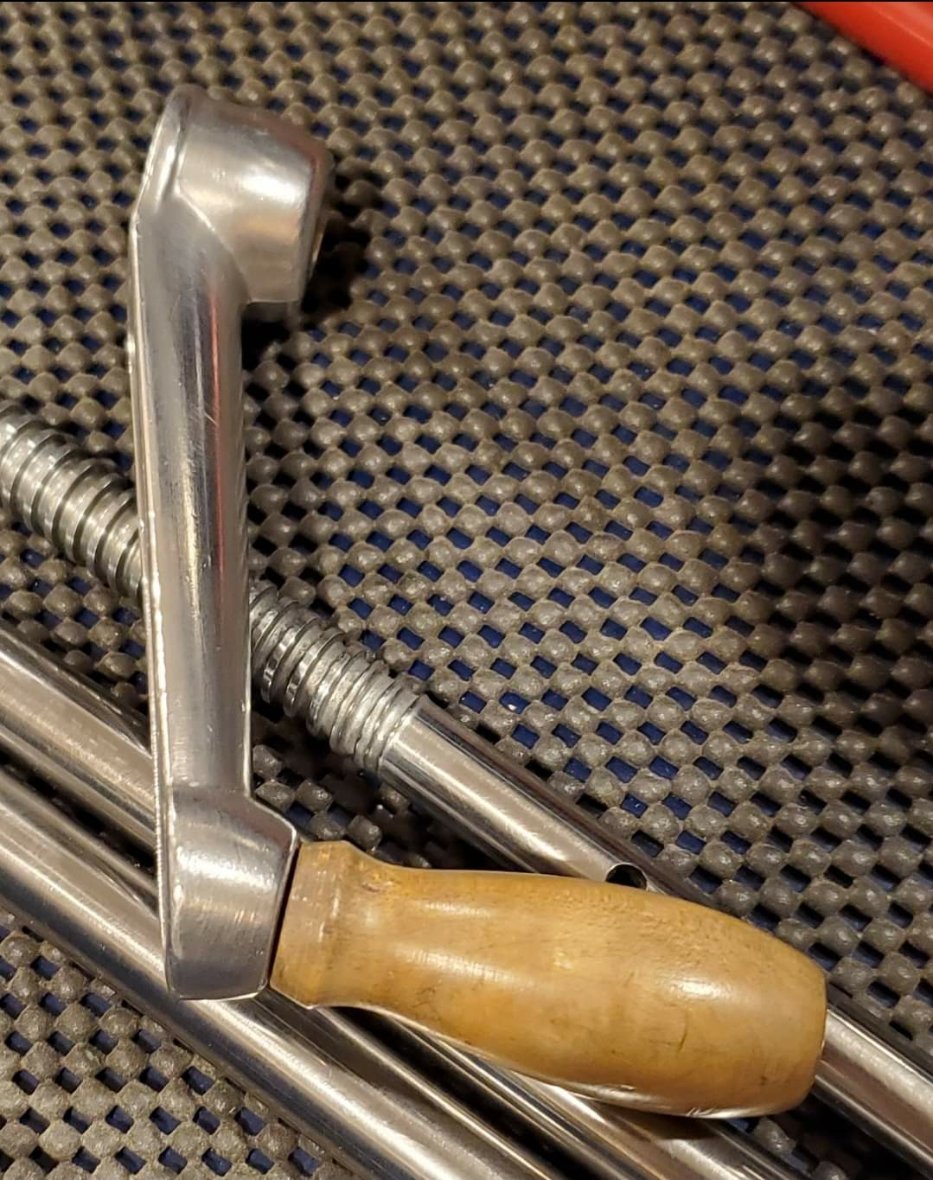 Paul- can you list the steps you take to clean up those surfaces? Your results are great and I'd like to
give it a try myself !