I also found and bought a shaper/sander fence which should be here Friday.

I hope you found the Shaper Fence for the Mark VII. There have been three different fences made over the years. The first is for the Mark 5 with the original table system aka Mark V 500 and will fit the Shopsmith Model 10's also. The second is specifically for the 1960's Mark VII and is show in the picture below. It has been out of production for a very long time. The third is for the Mark V 510, 505, 520 and Mark 7 all with the larger table system.

_
Note the attachment bolts are in between the fence adjustment knobs and go through holes in the table.

Stay with the lower blade guard you have currently. The original one made for the Mark VII is a cast aluminum guard that wraps around both sides of the blade and is not extendable. It is in the picture below. 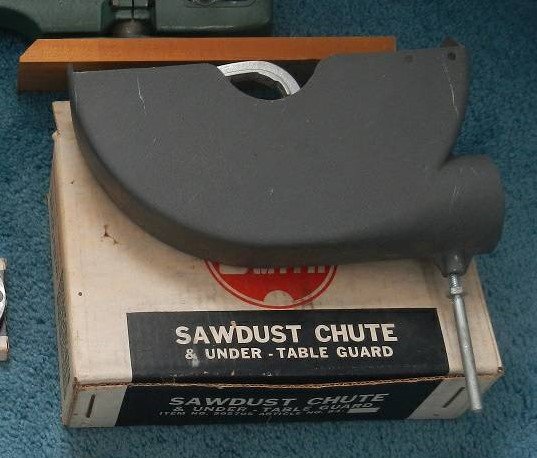 
Unfortunately Mark VII and Mark 7 do get interchanged occasionally

To add to the confusion the Mark VII from the 1960's has both Mark VII and Mark 7 on it. Generally speaking Mark VII is referred to the 1960's model and Mark 7 is the current model. For clarification I like to use 1960's Mark VII or current Mark 7 although I sometimes neglect to.
Russ

And yes, there are new arbors on ebay from a third party supplier that cost more than from Shopsmith. Unless you are in a big rush and Shopsmith is out of stock, I don't understand either why someone why pay more. Used 555321 arbors do occasionally come up for sale on ebay at a slightly lower price. I got mine a few years ago that way for about half the cost of new from Shopsmith.

(NOTE: My overall length measurements are approximate, with a gap left for approximately a 1/8" thick blade on both arbors.) 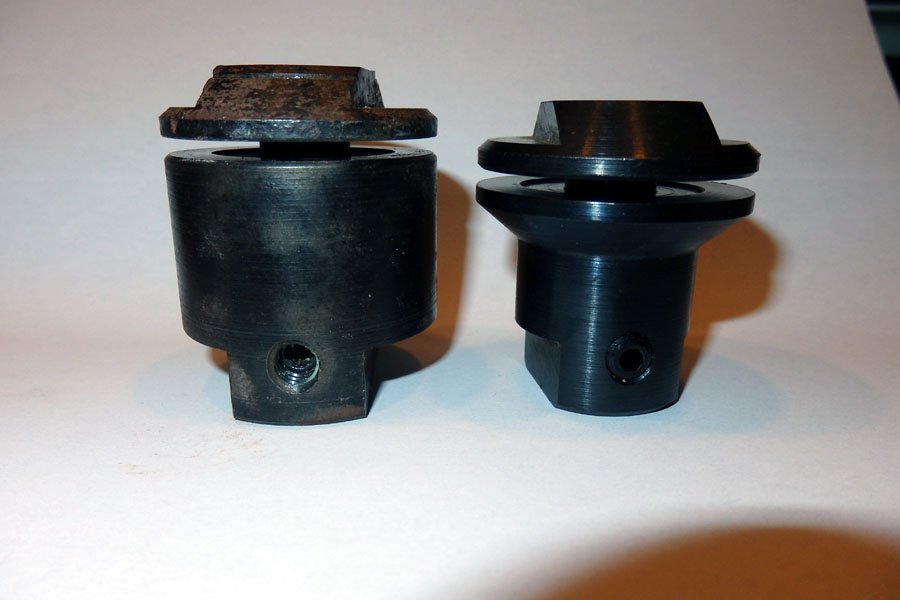 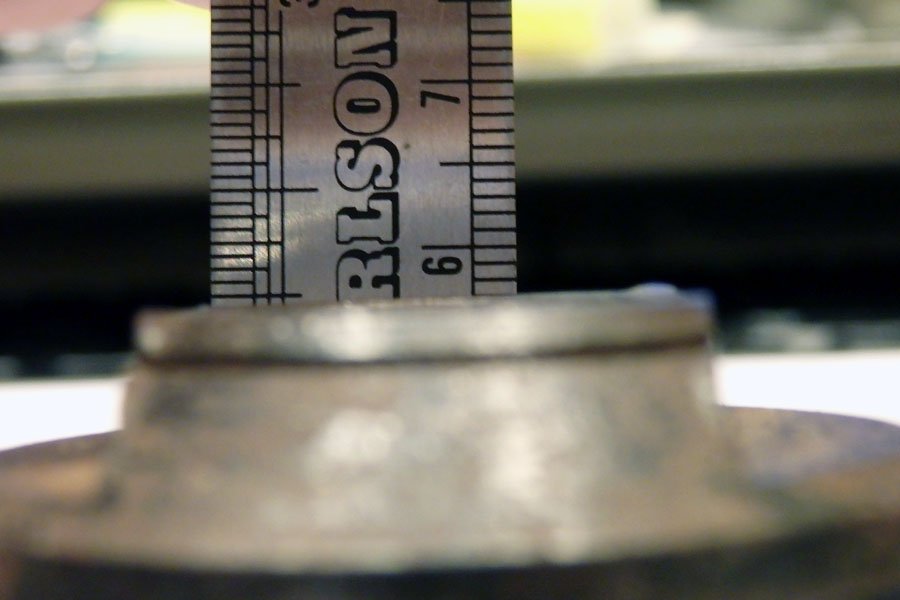 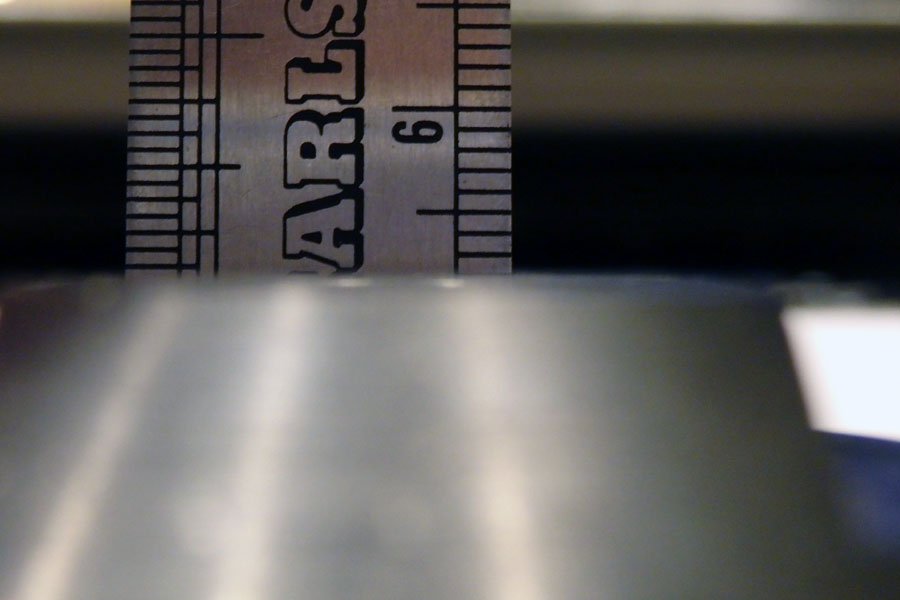 chapmanruss wrote: ↑Tue May 04, 2021 12:16 am I hope you found the Shaper Fence for the Mark VII. There have been three different fences made over the years.

This is a picture of the one I bought. I had holes already drilled in my table. I measured the distance between them at 3 3/8" center to center and had the seller confirm the same spacing. I am pretty sure it is correct, and looks like your picture. It was an impulse buy. I already have a separate craftsman router and table.

Thanks for the info, really appreciate it.
Mike -

No worries at all. I knew what you meant and really appreciate the help.


br549 wrote: ↑Tue May 04, 2021 7:08 am And yes, there are new arbors on ebay from a third party supplier that cost more than from Shopsmith. Unless you are in a big rush and Shopsmith is out of stock, I don't understand either why someone why pay more.

A lot of the Shopsmith stuff on eBay is ridiculously priced, but they know supplies are limited.

I was mostly concerned with the order of the arbor spacers. I have always used it with the thickest spacer first, then the blade, then the thinner spacer, lock tab washer, nut. To get the blade to align with the riving knife I have to put the thin spacer on first.
I think the 555321 is my best choice, and I haven't found one on eBay for cheap, so I may just buy from Shopsmith.

Thanks for the arbor pics and dimensions.
Mike -
Top

I an glad to see you found the correct Shaper Fence.

If you checked out the link br549 provided in a previous post you should have found two PDF's in my post. Scroll up from where the link takes you to that post. One has a picture of many of the Arbors from over the years and the other is a listing of the Arbors with additional information. The pictures below are more complete than the one in the PDF. Use these pictures as a reference to the PDF with the listing of the Arbors. These pictures do not include the Shaper Spindles, Router Chucks or SawSmith Arbors. 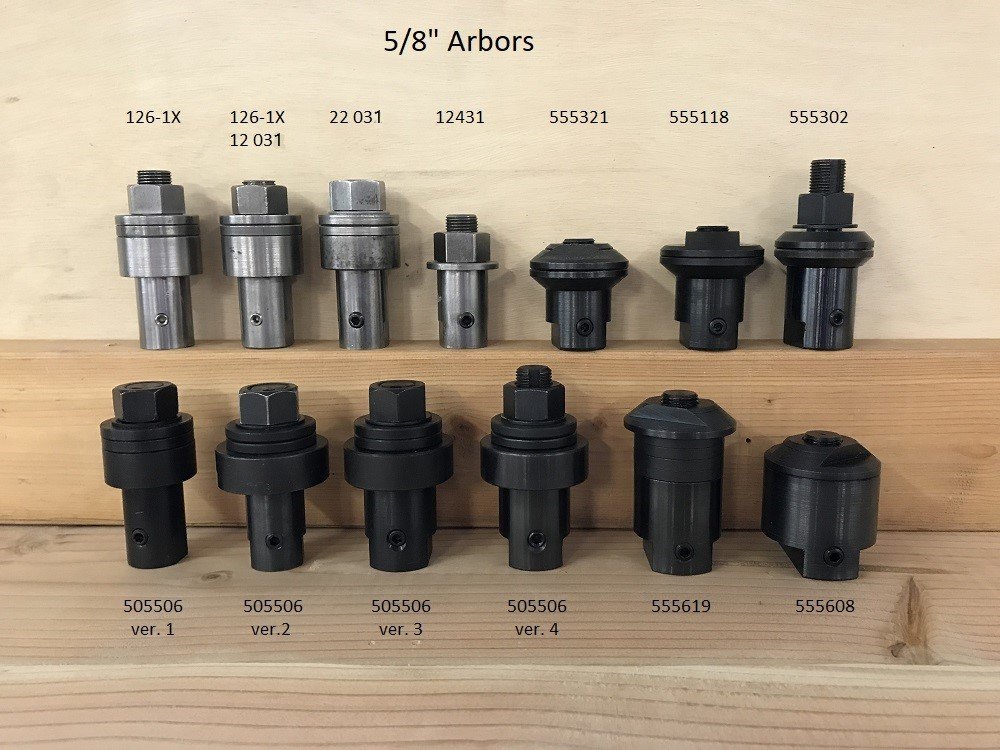 There was an error in the labeling of 12 031 and 22 031 in previous postings of the above picture. Anyone having saved it should replace it with this one.
_ 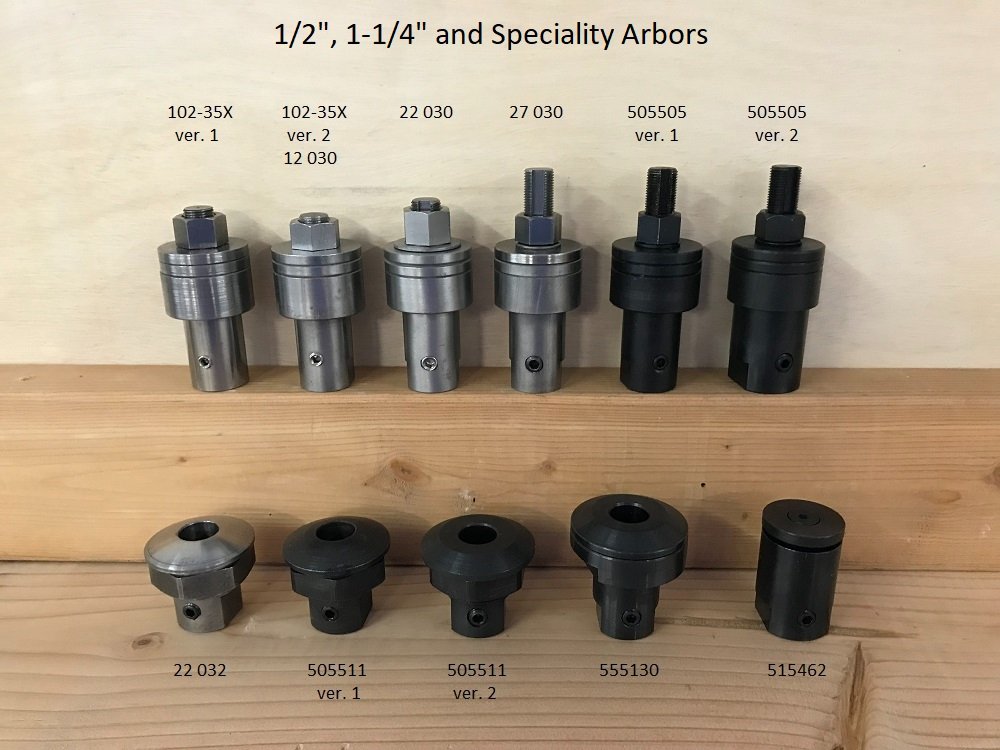 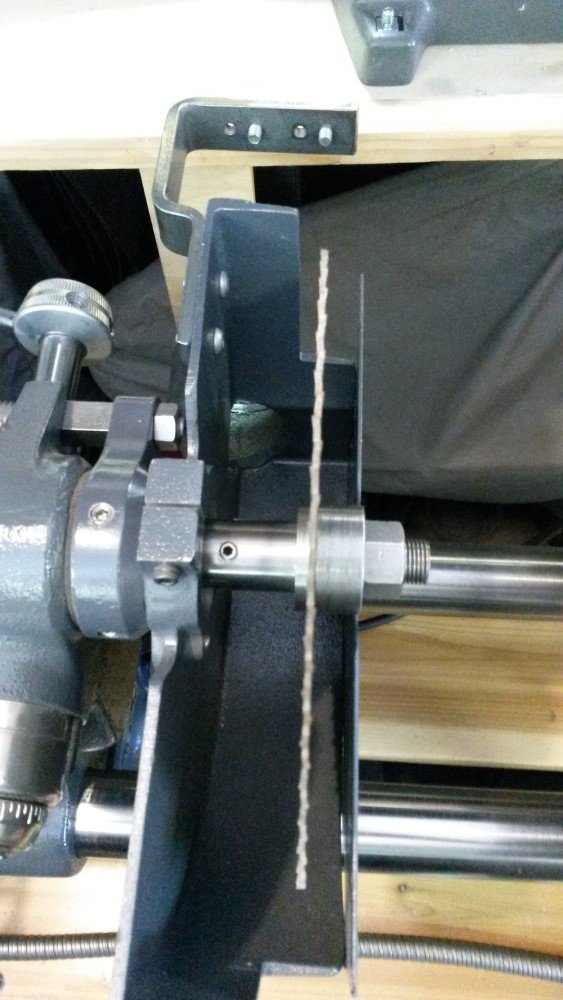 _
Mike, I will tell you I have never owned a 1960's Mark VII so I can only go on what I have learned about them. Others who own them can give more specific information about their differences compared to a Mark 5. I do know a lot about Shopsmith Arbors.

I hope we haven't overloaded you with too much information.
Russ

Yes, I have those pdf's, but will reference the pictures in this thread in the future.


chapmanruss wrote: ↑Tue May 04, 2021 1:07 pm With the spacing of the quill/spindle differences of the Model 10ER and the Mark VII you may still need the spacer in the Lower Blade Guard if using the 5/8" Universal Arbor for saw blades.

Yes I do need the guard spacer. The arbor looks like it sits back further on the 10ER than the VII. See my picture below as compared to yours above.

Yes, I know the picture below doesn't show it well, but 1 1/2" basically will put my blade where the first washer (arbor spacer) is now. If it does fit in the guard, it would be uncomfortably close. I may just stick with what I have. I don't see a real benefit to switching to the 555321 after all.

Nope. I am catching on slowly, and I keep coming back to my posts to review.
Thanks again, Mike - 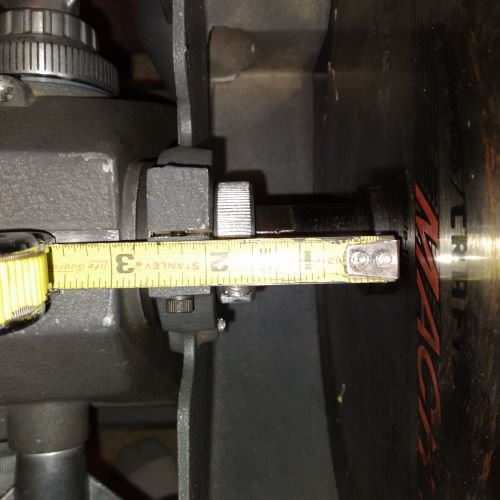 Sorry I didn't have a picture of the Lower Blade Guard on a Mark to show its spacing. Having it on my Model 10ER is like comparing apples to oranges. The Quill Assemblies are different between the Model 10's and the Mark 5 and Mark VII which both have the spindle knob. That's the part under the 2 of the tape measure in your picture above. It adds additional distance between the mounting collar of the guard and where the blade ends up on the Mark series tools.
Russ

chapmanruss wrote: ↑Wed May 05, 2021 12:27 pm Sorry I didn't have a picture of the Lower Blade Guard on a Mark to show its spacing. Having it on my Model 10ER is like comparing apples to oranges.

Portland Oregon is named after Portland Maine. It was decided by a coin toss and if the coin had landed the other side up I would be leaving near Boston Oregon.
Russ

An idea that hasn't yet been explored in this thread is blade choice for the Mark VII. To use the original system (aluminum guard as pictured below, carriage lock aligning the blade to the table slots), you'll definitely prefer to use the original short arbors and 9" blades by Magna. Those blades come available frequently on Ebay and such for not much money, they're of high quality for their time and sharpen up well. I haven't seen any carbides, but having the standard blades sharpened is inexpensive too.

The second photo is of the same setup (also 9" blade) using a 3D-printed guard I recently purchased through the Facebook Shopsmith User Group. It will take the 12" sanding discs, whether cast aluminum, flat steel or conical, and uses a set of bolt-in spacers to provide for whatever arbor you need. This allows me to use the 10" Magna blades (including carbides) in the Mark VII system. If you like another blade, your sharpening service can probably bore it out for the short arbor. 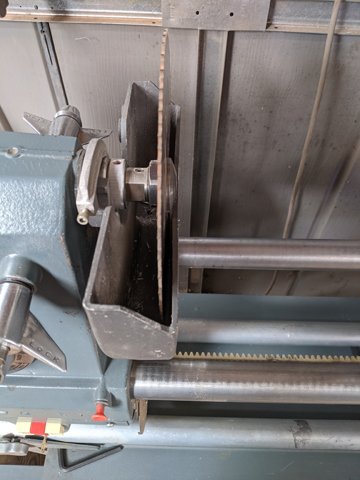 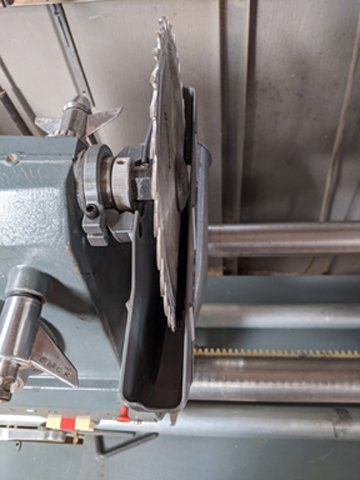