I'm a fan of the Festool track saw but..... the rotation hose connection can be a pain. Yes you can loop the hose and cord around your arm and that works fine but sometimes that is less then convenient, and that is when the frustration come in.

A lot of us resort to some tape to keep the swivel in the upright position. Yea that works but I really want a better solution. 10 minute workshop guy Peter came up with a as they say brilliant solution but not easy for us non-3D printer people. However it looks like things are changing.

I found one on Etsy but it was listed as a 36mm adapter. I don't often use that size hose for that application. I contacted the guy selling these asking if they had a smaller version for the 27mm hose. Turns out he had mis-listed them, they are for the 27mm hose. So I ordered one.

He thanked me for finding the error and is sending two red ones as a thank you. They should be here the week of the 16th.

Nice find, but I have not had much of a problem with the with the stock connector. I use a strap support from the ceiling to keep the hose up out of the way most of the time or use the collection bag for short sessions since I have a cordless.
Top

I want to once again thank you for catching my mistake in my listing. I hope that you like yours!

I designed, printed, and started selling the No Hose Snag adapters because I was irritated at the stock dust adapter rotating down and causing my hose to snag. I started doing the Sedge wrap the hose around your arm trick. Then thought this is stupid, why should I have to remember to wrap my arm around each time. A few prototypes later I had a solution. 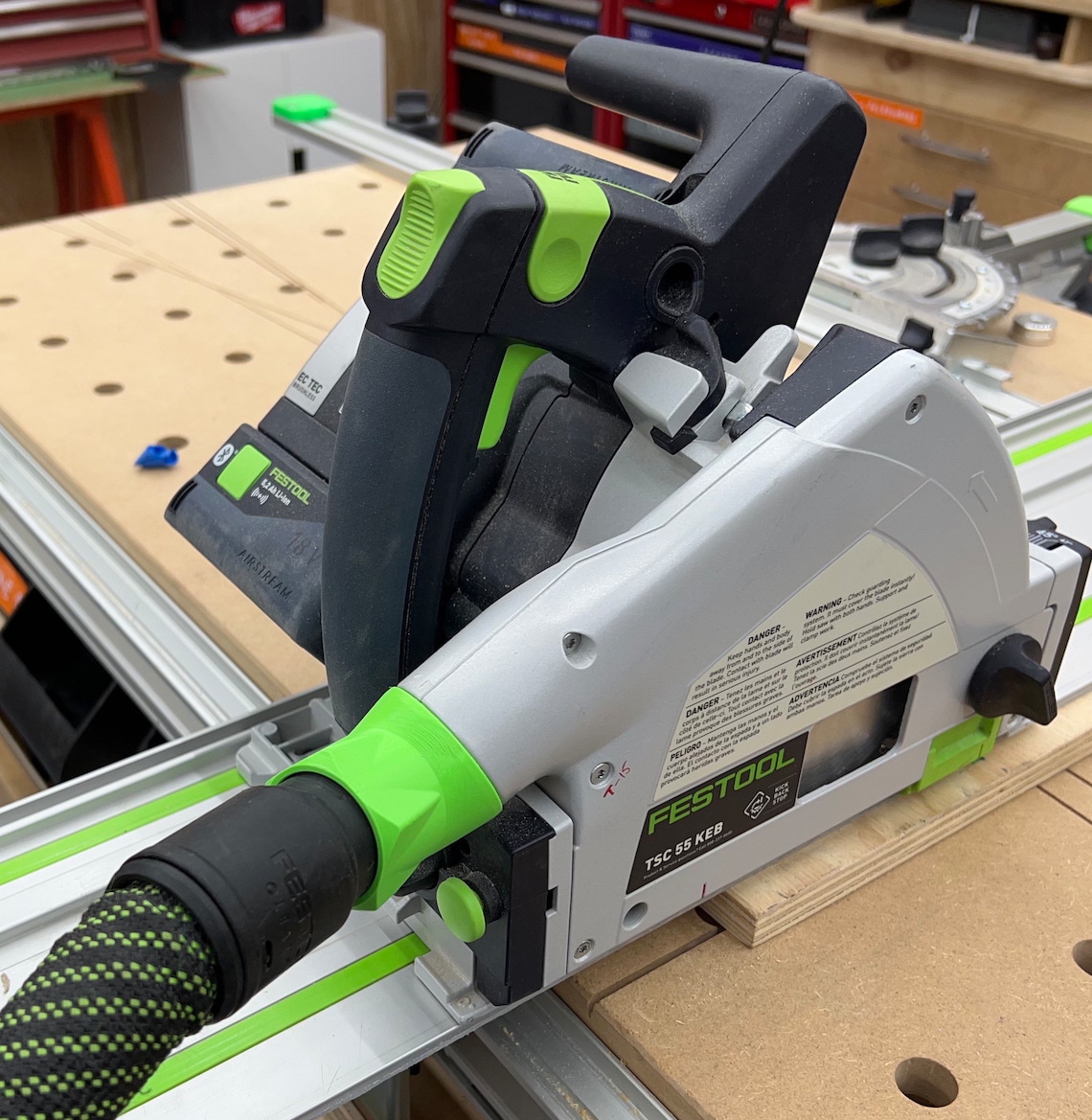 I am working on dual 36mm and 27mm versions. I am just waiting for Festool to ship me a 36mm hose so I can use test it for a few weeks to confirm it works. If anyone has any questions, requests or suggestions to improve it, just message me on Etsy, or email me at awilkerson (at) blackhawkhardware (dot) com.
Top

I've just been working on my TS55 this morning. I had cut some PVC and the saw had this fine gritty PVC swarf sticking to places. Vacuum took care of that. Then pulled the saw blade cover for pictures and then cleaned inside after taking the blade off and digging out a few areas that seem to collect dust inside.

Next I put on the new hose connection. We will get in to a little history and of course we have pictures to share.

When I first got the saw it had the swivel hose connector and it would turn how ever it wanted. I really didn't like it. Here is a picture of it: 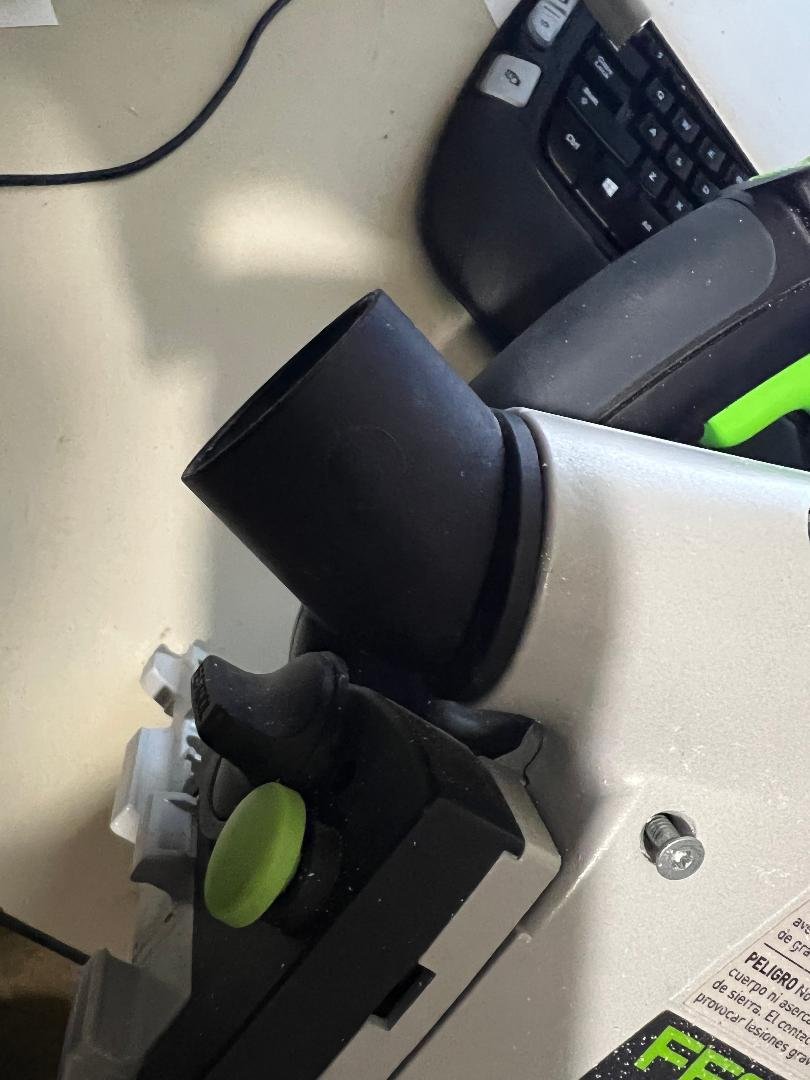 Then I read somewhere that they had a new and improved version that you could add to your saw. It had a fixed in place part and a swivel with detentes that connected to it. It was no where near strong enough to keep the hose from again doing as it liked. 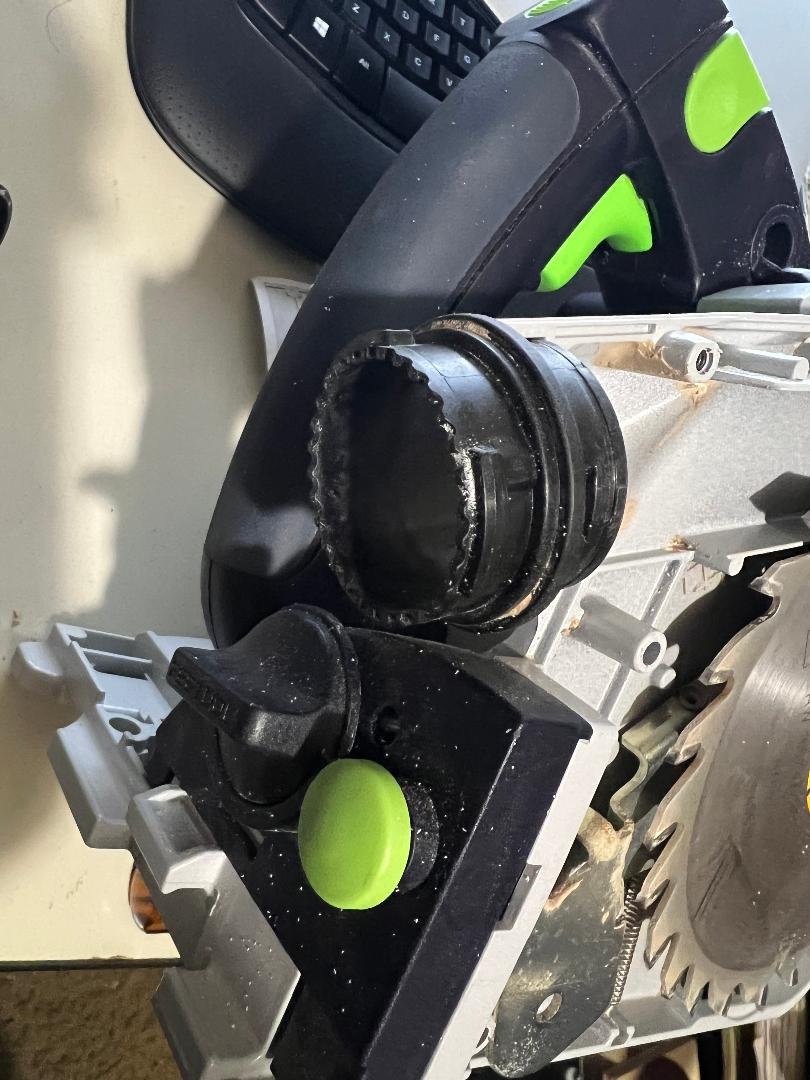 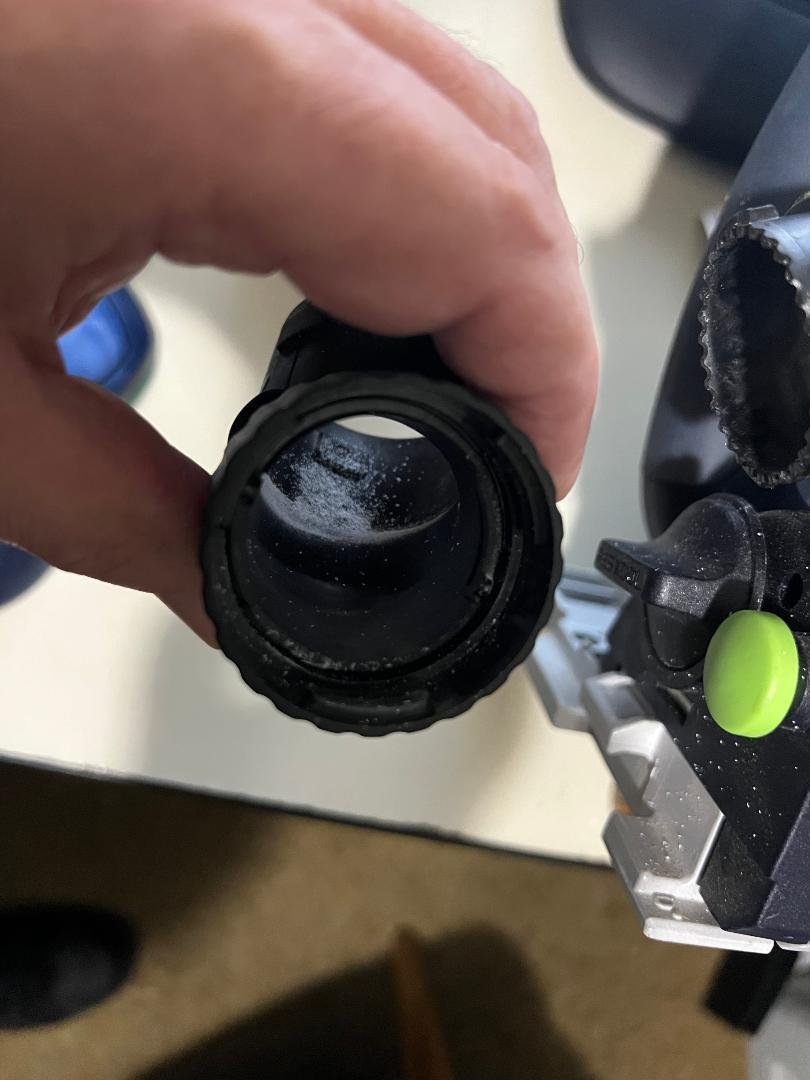 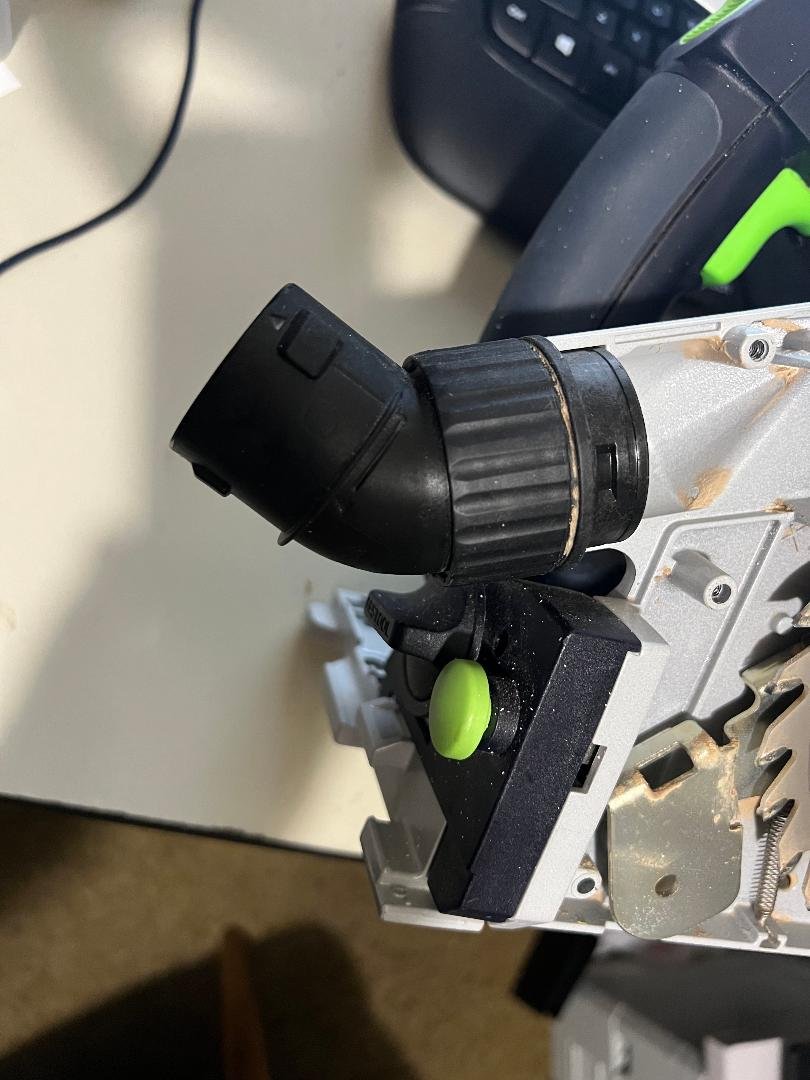 The other issue was that you had to take the two parts apart to get it to fit in the case. I think you could buy a new liner that adjusted for that but I never did.

This is the new one that I hope will solve all these issues. 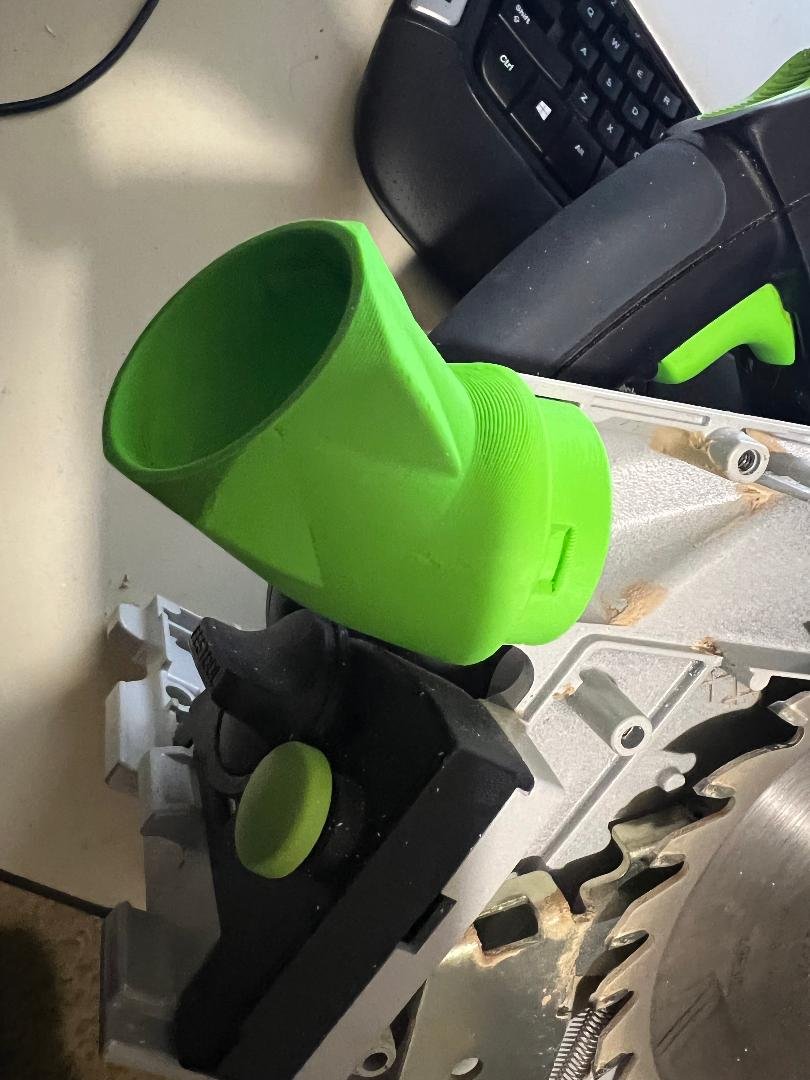 You can see the tab locations that hold it from turning. Once the cover is back on it is not going anywhere. 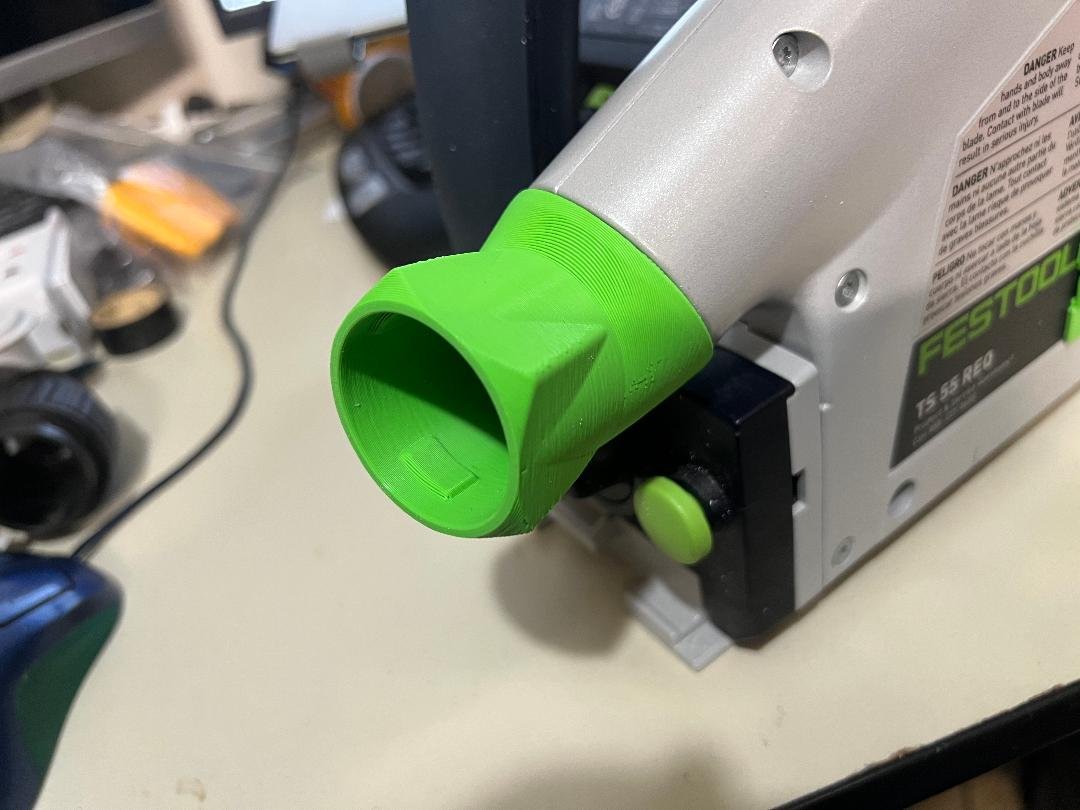 So far so good. Now to see if it will fit back in the systainer. 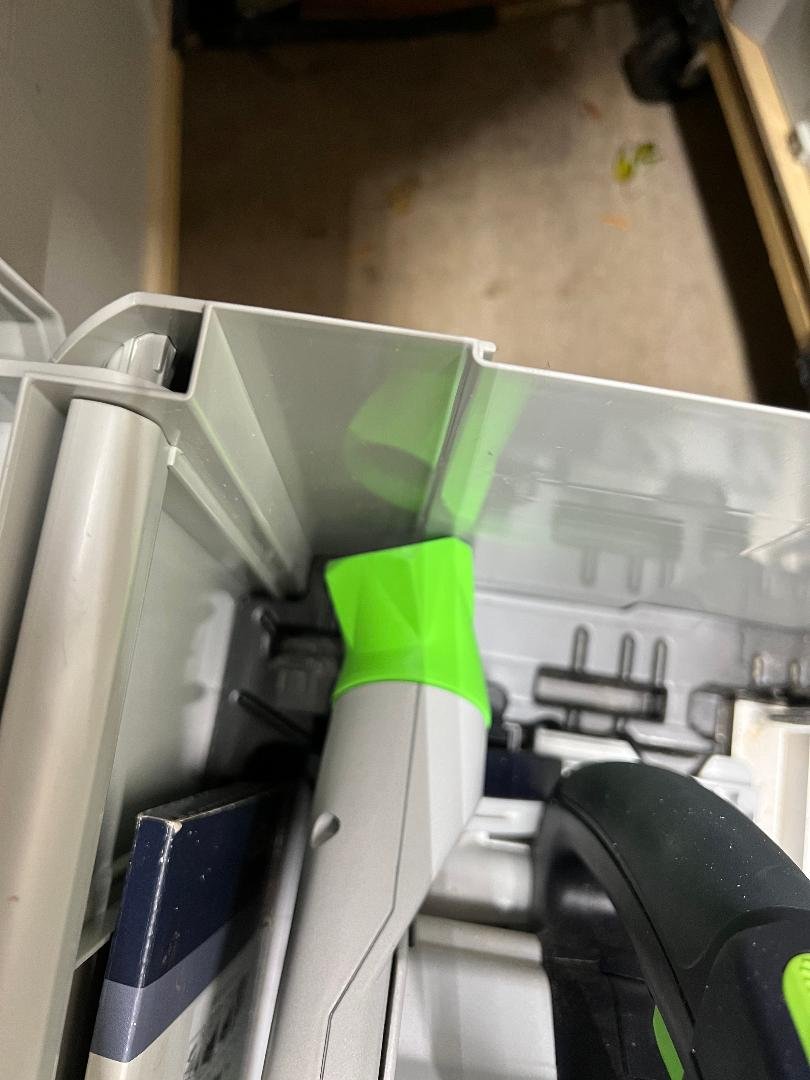 Yep, now when it warms a bit more and I can get back to doing some cutting we will give it the big test of actual use. I think it will do fine at that.

Will it fit on the lower saw guard? The short angle would be ideaL FOR MY APPLICATION.
"Making Sawdust Safely"
Dusty
Sent from my Dell XPS using Firefox.
Top

I wish I had this product for my track saws back when I was using them on a daily basis!

It's a long shot that you would have enough interest to merit the work for development, but if so, I would love to have a fitting that would work on the old Porter Cable Model#314 4 1/2" trim saw. Years ago, Dino from Eureka Zone had a video on YT and he had fashioned an adapter for the PC#314. As far as I know, he never listed it for sale.

Sorry Dusty but not even close.

Have you tried some 90 degree or 45 degree couplers?

I now have my adapter from shopsmith dust port to festool hose but too cold to be playing with it. The festool hose is really flexible so I think this will be a better solution for me. But if there were an angled port coming out of the shopsmith it could be a lot better.