Restoration Progress On My 1955 Greenie

Here's the response I received from Timken concerning the Fafnir 202KDD5 bearing. I'm pretty sure Timken owns Fafnir, so the response should be accurate. It looks like when you buy Fafnir you are buying consistent quality with a "C3" radial clearance from a top manufacturer. If I'm wrong here, please let me know!

See original posting and images in this thread.
See this link and attachment concerning the Timken radial bearing nomenclature.

Dave,
Timken only provides this part with one clearance level - P or C3 fit, .0004 - .0010". I am not familiar with a T radial clearance. Here are the ABMA options for this part. If you require something outside of the C3 clearance or fit, then you will need to contact another bearing manufacturer to see if they make the version you need.


My submitted question to Timken...[/color]
Message: I am looking for a Fafnir bearing 202KDD5 with a "C1" or "T" radial clearance. Is one available? If so what is the part number?

"Why do we drive on parkways and park on driveways?"

I was hit by the old saying "The devil is in the details"!

Thought I was done on the restoration of my Greenie but one members keen eye noticed that I forgot to paint some items, specifically the miter gauge and table saw angle scales, and the rip fence base. He PM'd me immediately instead of posting to help me save face but I just had to fess up to it. (thanks jpg)

I painted the casting yesterday and I wanted to post some specifics "for the record". I decided to paint these three pieces without first priming them with the self-etching primer. These are the only cast aluminum parts that I didn't prime. As you may recall for my other thread Rustoleum Hammered Paint - To prime or not to prime?, Rustoleum has conflicting info on whether or not to prime and within the member community, some prime while others don't sooooo, I decided to join the latter group on this one just to see first hand how the long term adhesion will be.

Prior to painting, I masked off the surfaces that I wanted paint free. I did not mask the angle scales on either the miter gauge (aka protractor ref. 271) and table saw component (aka Front Trunnion, part ref 144), reason being there is supposed to be paint down inside the numbers and graduation lines. After masking, I sanded the castings with 100 grit sandpaper. I did a real quick job since the breeze was starting to pickup and I wanted to paint outside. If there were any areas I would have done a better job on it would have been the tight inside corners but I did make sure to get a few good scratches in.

I then applied the first coat of spray paint and noticed right away the marginal texture as compare to my other primed parts previously painted. This was the same condition I had seen in my test sample spray I did earlier in this thread. Wasn't too concerned because I was going to apply 2 coats and knew that I could improve it by applying it thicker on the second coat.

After the first coat dried for 20 minutes, I used a new single edge razor blade to remove the surface paint from the angle scale surfaces. I used a slicing action similar to carving meat to remove the paint from the flat surface while leaving paint down in the depression of the lines and number. This worked pretty good but there were a few areas where the paint came up out of the depression a little. It may be a practice thing but I decided to wait 45 minutes after the second coat was applied. That worked better. The paint was still pliable at that point. After removing the paint from the angle scale surfaces after the second coat, I cleaned the surface off with a rag soaked in acetone that was wrug out real well. I used VERY LIGHT pressure so as to not get down inside the depressons.

Here's the completed miter gage protractor. Looks BRADY NEW!!. (the photo is large since it is actually linked out to an on-line photo storage site called Photobucket. Nice site!)
.
.
.

I ran into what I hope to be my last Greenie restoration topic. I completed the restoration of the jigsaw that came with the unit. (Photos of the finished unit to follow later today). I covered the disassembly in a different thread titled "Jigsaw head removal - The Nut Reinstallation".

When I put the jigsaw on the Greenie, I noticed that the alignment of its drive shaft to the drive shaft of the Greenie was off by 3/8" or so as show in the picture below.


Since the jigsaw tubes that drop down into the headrest are straight vs. eccentric, there was no apparent way to make an adjustment so I had to consult with the expert. Here's an excerpt of his email reply.


billmayo wrote: There are eccentric mounting tubes (#5137769) that allows alignment of the jigsaw and strip sander. Since I have collected quit a number of the straight mounting tubes, I cheat when doing this alignment. I just loosen the bolts that clamps the way tubes under the jig saw. I twist the headrest using the jigsaw mounting tubes (2X4 between them) until the headstock and jig saw hubs align properly. I have made 2 small saw horses with notches for the bench/way tubes that allows the caster when extended to just touch the floor. This way when I loosen the way tube clamp, there is very little weight on the headstock to way tube connections. This allows me to move the headrest on the way tubes with very little effort. This is not part of any Shopsmith instruction or procedure, just my way of doing it.


So, I'll try this approach later today. Hopefully it will be as easy as it sounds. 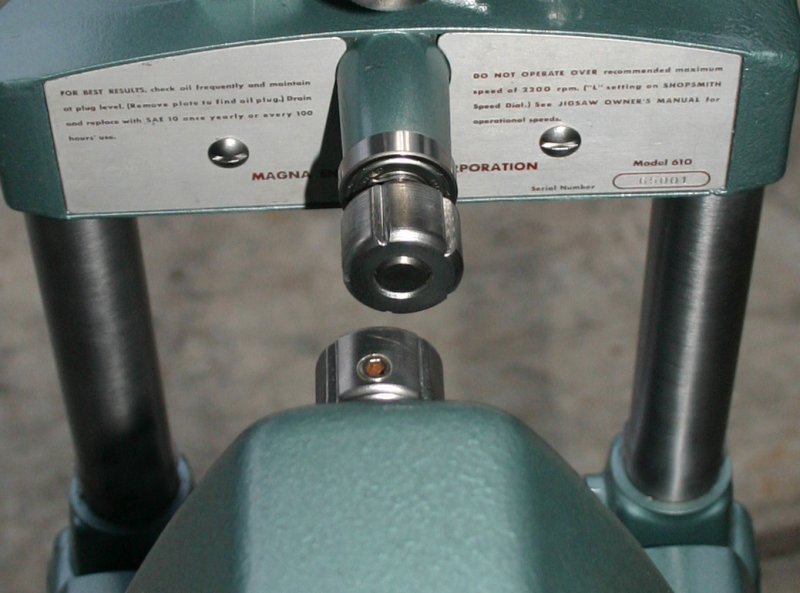 1) Have you assured that the SS is level?
2) Does the Greenie have the adjustment screw on ONE side of the endcap"
3) If so have you 'adjusted' it?

Thought of these AFTER reading Bill's reply!

I forgot all about that set screw. I believe that you are talking about the one that is threaded into the headrest that contacts the bottom surface of the way tube tie bar (ref #25).

Thought of these AFTER reading Bill's reply!

P.S. This provides very little range. Bill's method seems much more effective. I was originally thinking he was causing rotation of the way tubes, NOT end cap rotation!

mickyd wrote:I hope it is the set screw. That's an easier fix. - mickyd 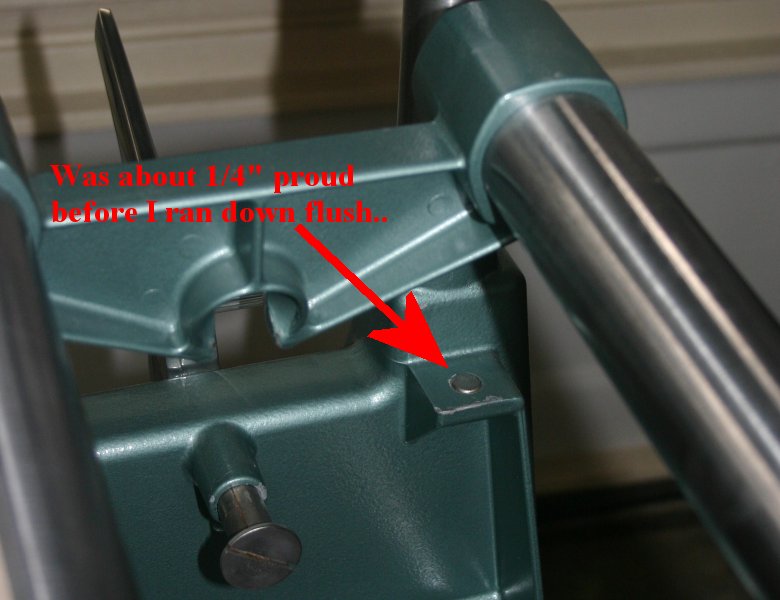 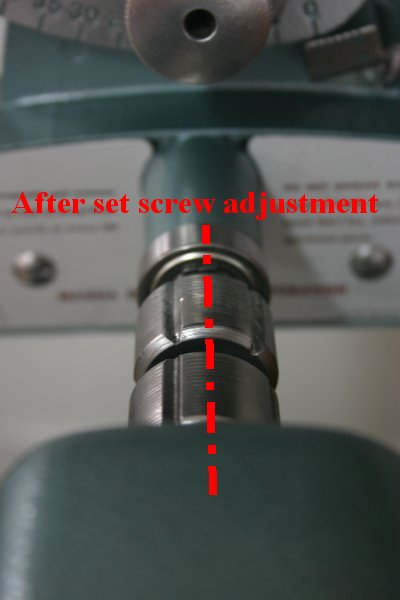 
The "mystery" bearing jpg is referring to is the one mounted on the jigsaws drive shaft, directly outside the housing, facing the headstock. I had already ordered a replacement bearing prior to questioning what it was there for ($25 with shipping....ouch). I couldn't understand what the bearings function was since for one, it's a slip fit on the drive shaft and two, the outer diameter is just hanging out in space. See photo below.

FYI - This bearing is NOT shown in the jigsaw owner manuals exploded view or parts list. Instead, it shows a stack of 2 washers with a retaining ring (aka snap ring).

I ask Bill Mayo what the bearing was for and he said that it serves as a “thrust bearing”. If a force is applied to the drive shaft toward the jigsaw, the side of the bearing will contact the face of the jigsaw housing and allow the shaft to continue to rotate smoothly. I can see why they changed the design from two washers to a bearing for this reason BUT it would seem that washers may work just as well since with proper positioning of the headstock to jigsaw, the coupler should not cause the shaft to push in toward the housing. Maybe I’m wrong but I’ll find out when I actually use the thing. Washers are a tad cheaper than that bearing also!!! 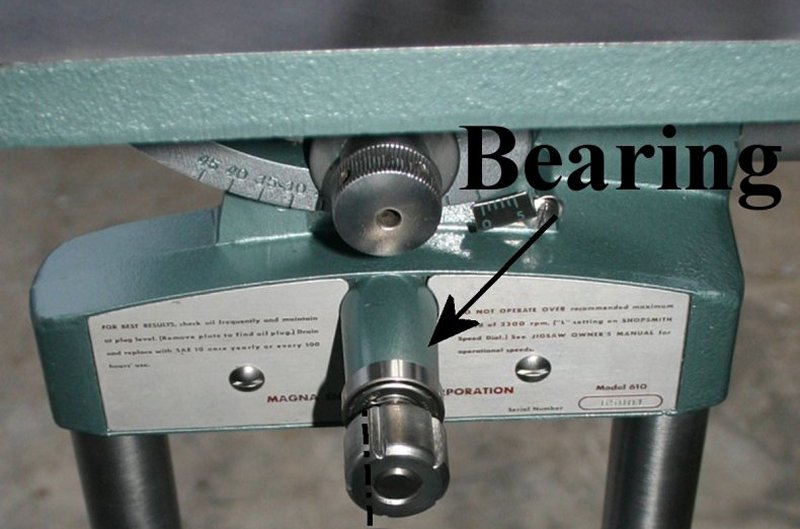 Mike, I'm not into restoration at all (never done it even auto body work), but I am absolutely amazed at your (& others here) restoration work!