This thread originally started in the "Community" forum but since it fit better here, I decided to continue it here. The old thread showing other pixs I took and also some great links to Sawdust sessions (courtesy of jpg) can be found at: http://www.shopsmith.net/forums/showthread.htm?t=3012

The photo attached show what the speed control looked like when I got my first shopsmith home.
.
.
.
[ATTACH]3319[/ATTACH]
.
.
I purchased the machine without any prior knowledge of ShopSmiths. The person I bought it from had no electicity so I couldn't even fire the thing up. GOOD THING!!! I tried turning the drill chuck and that caused a metal on metal clunk. I thought that it was probably an adjustment. Once I got it home, I realized that the clunk was coming from the speed control arm bracket contacting one of the fins on the control sheave. You'll notice that the clip that is supposed to hold the speed control arm aligned with the square end of the sheave is not in the holes. You'll also notice that the speed control arm is actually way off center and in contact with the face of the control sheave.

Now I don't profess to be a forensic ShopSmith doctor but here's my best guess on what caused this failure. (If I'm all wet, don't be afraid to bark out with your opinion). While in the off position, speed control on low speed, the speed control knob was rotated (forced) toward higher speed to the point where the speed control arm slid off the face of the square contol sheave end (simliar to a phillips screw driver camming out of the screw head). When this happened, the control sheave was able to move an additional 1/4" (the length of the square shaft protrusion) toward the ears that hold the speed control arm to the speed control. This probably bent the ears AND cause the retaining clip to come off AND cause the ears to come close enough the the control sheave so that when the drill chuck was rotated, the fins contacted the ears.

Whatta ya think.....does this sound logical??? I thought so except......there is some unaccounted for "mystery damage" (see pic with same name) on the spring steel piece that is mounted to speed control arm that serves to protect the speed arm casting from the rotating square shaft.
.
.
.
[ATTACH]3321[/ATTACH]
.
.
.
The "mystery" damage sure looks like it was done while the unit was running but if the unit was running when the ears hit the fins, I would think that the there would have been damage to the fins, which are unscaved.

Incidently, the control arm stop screw (p/n#94) was flush with the jam nut, thus protruding .430" toward the control arm contact point. And lastly, when everything was taken apart, the control sheave was frozen to the shaft due to gummy sticky build up.

So that's my story and I'm sticking to it unless someone can come up with the "real" failure mode.

Havin' a ball working on this thing. Those sawdust sessions jpg provided in the previous thread mentioned above, along with my laptop out in the garage, (hitting the pause button if it got ahead of me), made completely disassembling and inspecting the entire headstock a breeze. ANYONE could do it, even with very little technical skills or unique tools. Just follow Nick. He'll get you through it. 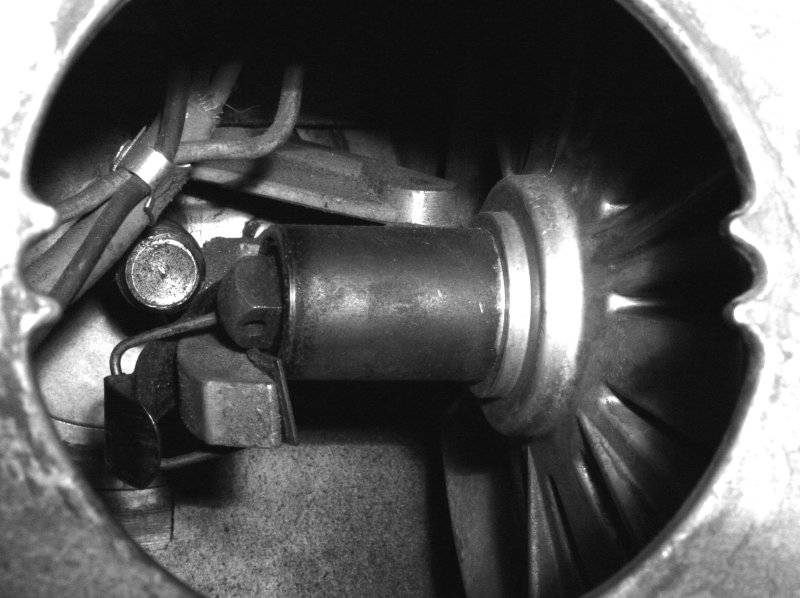 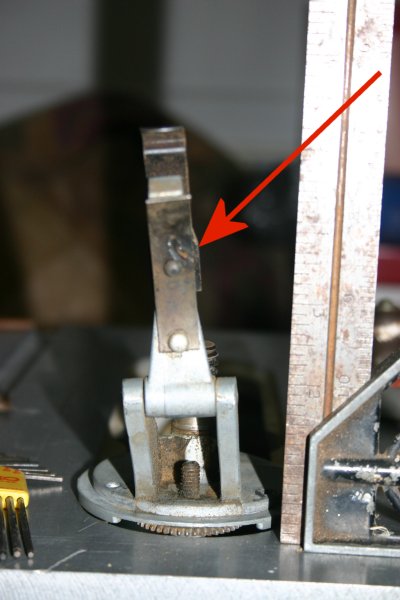 I am not entirely convinced of this since how the slipping off the quadrant first occurred is not explained. However the 'mystery wear' indicates it WAS drifting that direction.

The high speed stop screw was correct according to your description(outer end flush with jam nut).

Let the gummy stickey be a lesson. #10 oil (or similar turbine oil) IS the proper stuff applied often.