Newbie, looking for a little info

Newbie, looking for a little info

Well to get started hi, I have no idea about shopsmiths but I’ve been on the lookout for something to get started in the garage.. as you can see by my user name which looks like it cut the last letter off, I’m well was a plumber or hvac, I’ve had seizures since I was two but they have gotten worse with time, normally always been under control, until 08 where things changed and I ended up in a car accident, don’t know which came first the accident or the seizure, I’ll never know, since then I’ve had to be under total supervision by my wife because I have no clue when they are coming on, so if I’m doing something someone’s got to be with me so I don’t do something stupid, but since then I have basically rebuilt our kitchen, as a hobby I do models called metal earth, they come as a sheet of metal and you have to pop each piece out and form it to attach it to the next, and so on until you complete the entire model, anyway,
I’m not a carpenter but know my basics with wood, I’m not a machinist, but I’ve made a complete ball peen hammer with a knurled grip from scratch, same with cars, basically name the field I know the basics, before my accident we lived in a house which only had a small shed maybe 8’x10’ and I wanted my own little setup, just didn’t have much room to put all the main equipment, so I built a special table, simple 2’x4’, but with a special 1’x1’ cutout in the center, it allowed the same size piece to be dropped in, but I mounted a jigsaw to one, a circular saw to another, and a router to another, I even put a three way switch in wired to an outlet on the back side, the upper outlet was wired so that if I flipped it on it turned on, flipped down it turned off, but if I plugged it onto the bottom outlet and flipped up nothing, flipped down it got the power but I had to step on the pressure switch to do so, it was my cute little setup, then we ended up moving, and well, I didn’t get to take the table, ended up not getting a lot of the tools either, yet now we have a two car garage but nothing to do, my thing is I like multitasking items, and I’ve really have had my eye on these shopsmiths, and I’ve always wanted to try my hand at woodturning, just don’t have a big budget, so I figured a shopsmith would kinda be the way to go since it’s a multitasker, I just don’t know the diff between these 10s and mark5s or whatever names, so if any of you wouldn’t mind helping someone out and giving me the rundown on just how these things work and what’s the diff between any of them it would be greatly appreciated, thanks
JR
Top 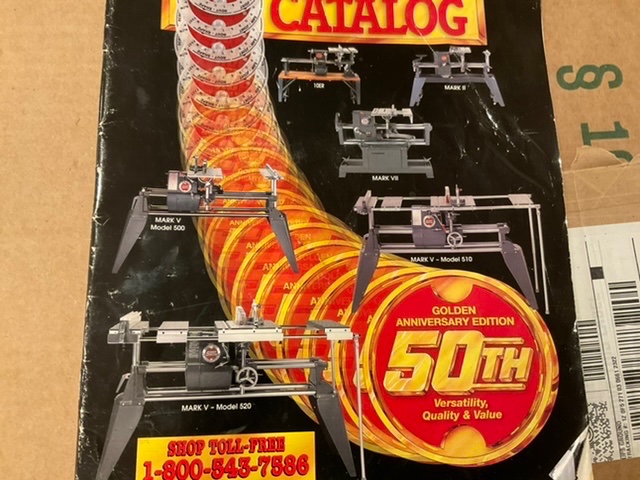 I also like to suggest that you check out Scott Markwood’s YouTube channel MyGrowthRings. He does video mostly on Shopsmith with tips, tricks, and history.

If considering a new purchase, consider the recently added stripped down version.

Ok, so do all accessories fit via add on? Is the 10 just your basic start up you only get like the lathe, saw, and drill and it has to be mounted to a table, vs the others where they have there own legs and are longer and will hold more accessories at one time?
I mean I only really need a table saw, drill press and lathe, but would maybe like to add on extra things in the future,
JR
Top

To give a detailed history and summary of the various Shopsmith models, capabilities, etc. in a single post is practically impossible. Fortunately, many very knowledgeable Shopsmith Owners have undertaken that task and you can learn from their experience. At the top of the Maintenance and Repair Forum are 4 threads that are called "stickies", because they always remain at the top. All are loaded with tips, advice, history, explanations, etc. My personal favorite, and one which might be most beneficial to you, is Everett Davis' "Shopsmith Large Format Drawings, Illustrations and More". He provides a link to his Google Drive which contains many files too large to be hosted by Shopsmith. The "Buying a Used Shopsmith.pdf" is 16 pages long, very informative, and I think will answer many of your questions, and lead you to explore in greater depth the model(s) best suited for your needs.
Top

Shopsmith Mark 5 What When and Where

SPT's What When and Where

As you can see from the list below my name, I have several Shopsmith Tools. Owning both Mark series and Model 10's I can tell you what works best for my needs but yours may be different. Unless you want to collect Shopsmith Tools there are a couple of models I would not recommend considering. The first is the Mark 2 made in the late 1950's to very early 1960's. This was a less expensive alternative to the Mark 5 at the time. The other is the Mark VII made in the 1960's which is very different than the Mark 7 made today. The biggest reason for suggesting not getting a 1960's Mark VII and another reason for not getting a Mark 2 is there are not any new OEM parts available for them so you have to get used parts which can be harder to find. That last statement is also partly true for the Model 10E and 10ER. Other than common hardware there are only two OEM parts still used in the Mark V, Mark 7 and Mark 4 today. All other parts needed for a Model 10 would have to be found used. There were a lot more Model 10E and 10ER tools made than the Mark 2 and Mark VII so finding used replacement parts is not as difficult. To date I have restored 25 Model 10E and 10ER Shopsmith's. It has not been very difficult finding parts for them. I cannot say the same thing for the Mark 2 I restored and the other one I have that I still need parts for to be able to restore. I have not owned a Mark VII from the 1960's. My opinion on it is based on what I know about the Mark VII.

Now for some good news about the Shopsmith Model 10's and Mark Series tools. They all have one thing in common. They all have the same size 5/8" reverse tapered spindle and the same outside diameter Quill. What this means for you is if you decided to get a Model 10ER and needed the Lathe Drive you would not have to find a used one made during the time the Model 10ER was made but can use a new OEM one purchased from Shopsmith today. The only changes to the Shopsmith Lathe Drive over the years is the size of the set screw changed in 1954 and the black protective coating was added beginning in 1964. There are some Model specific accessories that do go on the Quill or Spindle. If you decided to get a Mark 5/V anything on even the earliest Mark 5 from 1954 can be replaced by currently available Mark V parts. Sometimes this will require replacing an assembly rather than a single part. All Mark V to even Mark 7 upgrades can be added to any Mark 5/V but older Mark 5's may require more parts to be able to have the upgrade.

Sorry if this post seems long but there is so much to talk about when it comes to Shopsmith Tools and their long history.
Russ

Thank you so much for the info, we live a little south of Detroit Michigan, and shopsmith’s keep popping up on facebooks marketplace someone is currently selling a 10er for $215, and a 53 mark V for $300.. my thing is since both my wife and I are disabled neither one of us drive, so things are rough, and cash is tight, so I really trying to get the most info as to what’s the best for the best price, like I said in my intro, I basically rebuilt my kitchen just using a compound miter saw a jig saw, and battery tools something like this would have made it so much easier, I just don’t know the first thing, I mean I could get a simple cheap table saw, build a table, maybe find a drill press and some other mini tools and start making a shop, or just just get one simple tool all in one shot? So idk?
JR
Top

I wonder about "a 53 mark V" since the Mark 5 was introduced in March of 1954. Many sellers don't really know much about what a Shopsmith is which can be both good and bad. Being an educated buyer will help. If you decide to go for a Mark 5, I would hold out for a later one that has the 1-1/8 HP motor as opposed to the 3/4 HP motor the early ones came with. More power for the table saw. Also, the later ones with a 1-1/8 HP motor as shown on the vent plate of the belt cover (where the serial number is) will have the Poly V Drive instead of the early Gilmer Drive. Most of these will be gray but the first Mark 5's with both the Poly V Drive and the 1-1/8 HP motor were in the Goldie Paint colors. The Poly V Drive is still in use today and many repair costs will be lower.
Russ