Running wood between the fence and router bit will lead to shooting board around. How do I know because I did it. Snatched a board out my hand accelerated it up to nearly router bit speed and shot it across my yard over to my neighbors. No harm done but scared me enough that I had to change my pants. Hate to think what may of happened if my hand was dragged into bit. Learned never never never trap wood between cutter and fence.
In fact, it just dawned on me, I was making the cuts needed to make the block you see in my avatar. I was testing a straight cutting bit on a test piece of wood to see if the Shopsmith speed would be able to make the cut. It was and is by the way. In fact my avatar was made exclusively on the Shopsmith 510 model. No router needed just the confidence that the machine would do it.
Top

I hear ya , glad that was all that happened, keeping the deepest part of the cut on the table sounds a lot safer . If the OP has a router / shaper fence it would be even better than a sacrificial fence . on the final pass a feather board can keep the piece from chattering and save some sanding.
Hobbyman2 Favorite Quote: "If a man does his best, what else is there?"
- General George S. Patton (1885-1945)
Top

One thing that I haven't seen mention is the grain of the wood during the cut , a thin piece can explode or try to kick back especially on a thinner piece if the grain changes directions . might stand a better chance of success with a thicker piece of wood ?
Hobbyman2 Favorite Quote: "If a man does his best, what else is there?"
- General George S. Patton (1885-1945)
Top

br549 wrote: ↑Wed May 25, 2022 8:41 am My Shopsmith is a Mark V 500, so the faster RPM of hand-held router should also help. My thought to use the Shopsmith, even with it's slower speed, was because I didn't think a bit this large could (or should) be used in a hand-held router.

Just a thought...with a Shopsmith Speed Increaser you can get the advantages of under the table routing and increased RPM. Using the speed increaser, my Mark V 500 at the "V" setting spins at 10,800 RPM, which is a good speed for large bits like the one you are using.
Ed
Idaho Panhandle
Mark 5 of various vintages, Mini with reversing motor, bs, dc3300, jointer, increaser, decreaser
Top

I am having trouble visualizing the projectile scenario if the proper plow feed direction is utilized. Thrown back I understand.
╔═══╗
╟JPG ╢
╚═══╝

An update to what I tried and how well it worked.

Using a hand-held router was tried first. I temporarily attached the stock to the edge of a 2 x 6 so the router would have a large surface on which to ride. This produced pretty good results, but attaching and de-attaching over 50 pieces of stock seemed like a lot of work. And cutting the full profile in one pass would have been a bit much to try. I could have set up an edge guide to make multiple passes, but again more work.

Next I tried the Shopsmith. When I set it up in the drill press position, too many things slipped or didn't work well. Gravity was not working in my favor.

Finally tried with the Shopsmith in the horizontal position with the table tilted 90 degrees. Made an auxiliary fence and attached to the fence so that the router bit could be buried in the fence. My "L" shaped guides made of 2 x 4's to keep the stock pressed down to the fence and against the table did not work well. Limited my view of where the stock was, and hard to adjust. Any slight variation in the width of the stock and it took too much effort to push the stock through, even with waxing the inside surfaces of the guides and the fence.

My feather boards bolted loosely together worked best for holding the stock down to the fence. Once adjusted, a large C-clamp kept them in position and provided the desired amount of pressure on the stock. The bolt head on the table side rode in the miter slot. A lock nut kept the nut from vibrating loose, and it was loose enough to allow the feather boards to be adjusted.

Adding height to the wood auxiliary fence gave more support for the stock, and a place to clamp thinner feather boards to keep the stock pressed tight to the table. Another feather board on the outboard side of the cutter would be better I think.

Stock that I used was old 1 x 6 cedar T & G siding that I salvaged when I re-sided part of the house last year. Cut pieces down to 1 x 4's. Found I could cut two profiles on each 1 x 4 (on opposite sides) and be able to rip them apart at roughly a 30 degree angle to give me the sloped top edge I wanted to glue to the underside of the post caps.

I took three passes to get the completed profile, lowering table slightly between passes. Depending on the grain, there was a varying amount of chatter. If one side cut clean and smoothly, then the other side usually chattered more as I was then going in the opposite direction of the grain. 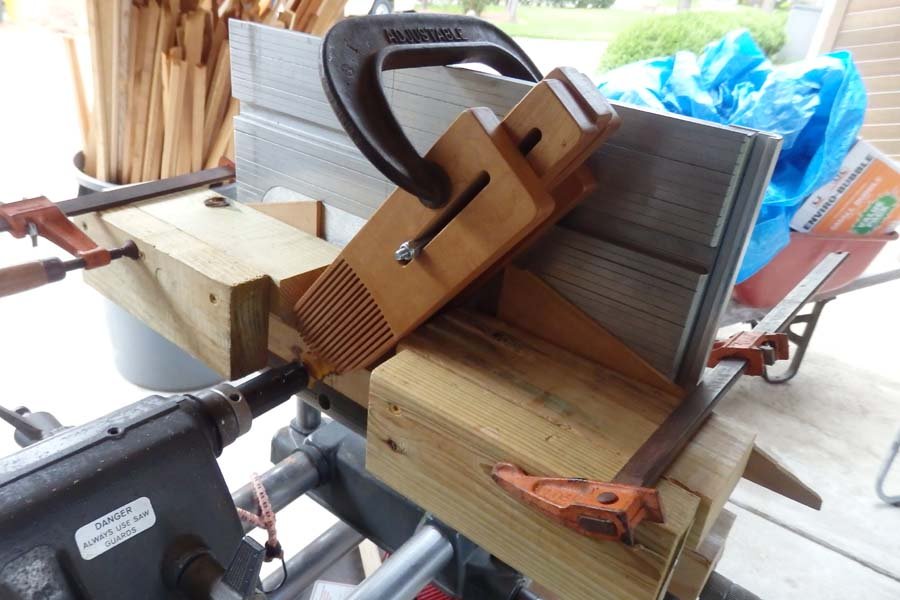 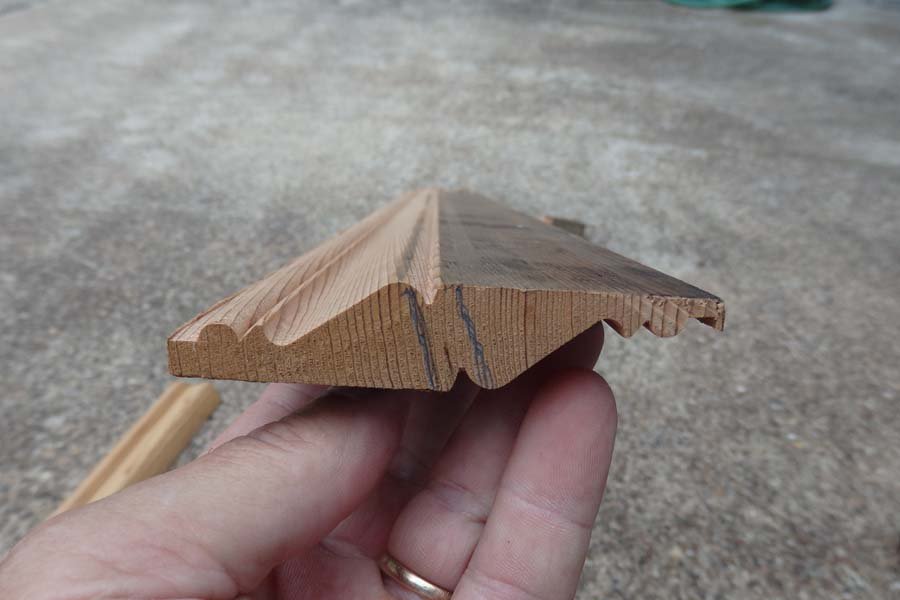 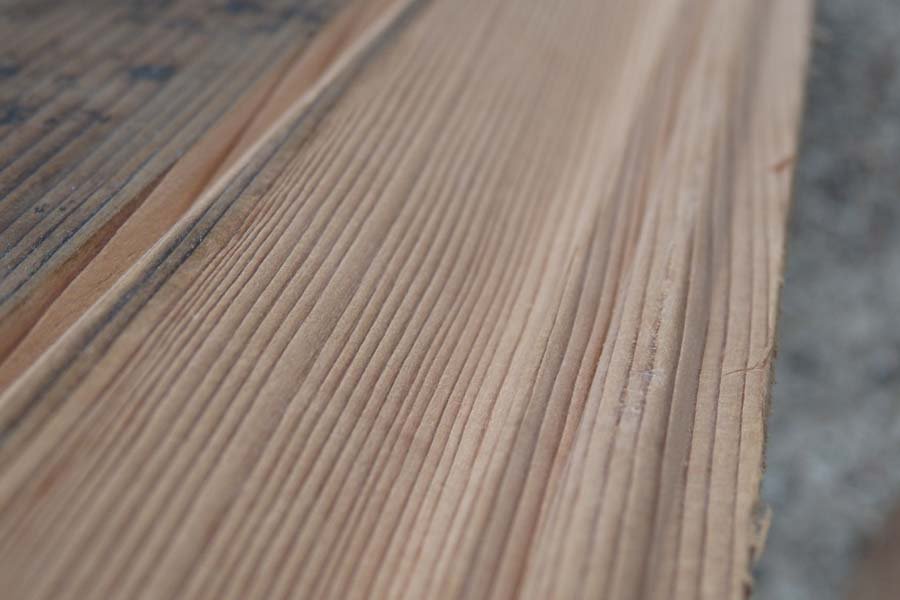 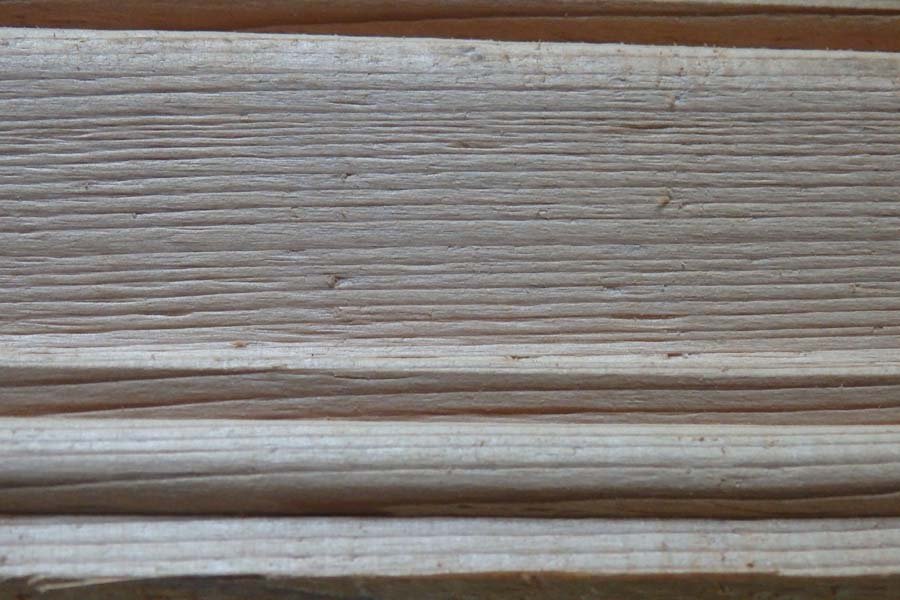 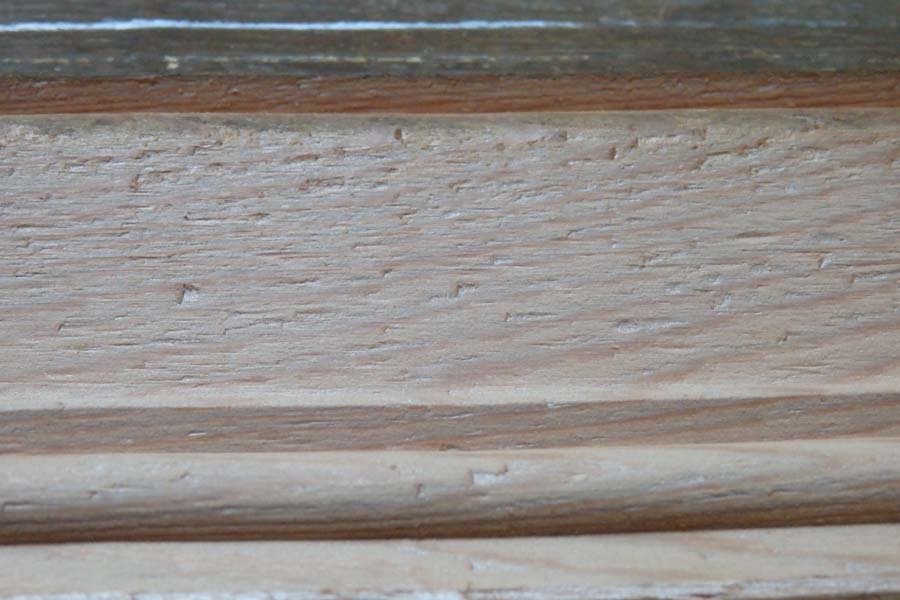 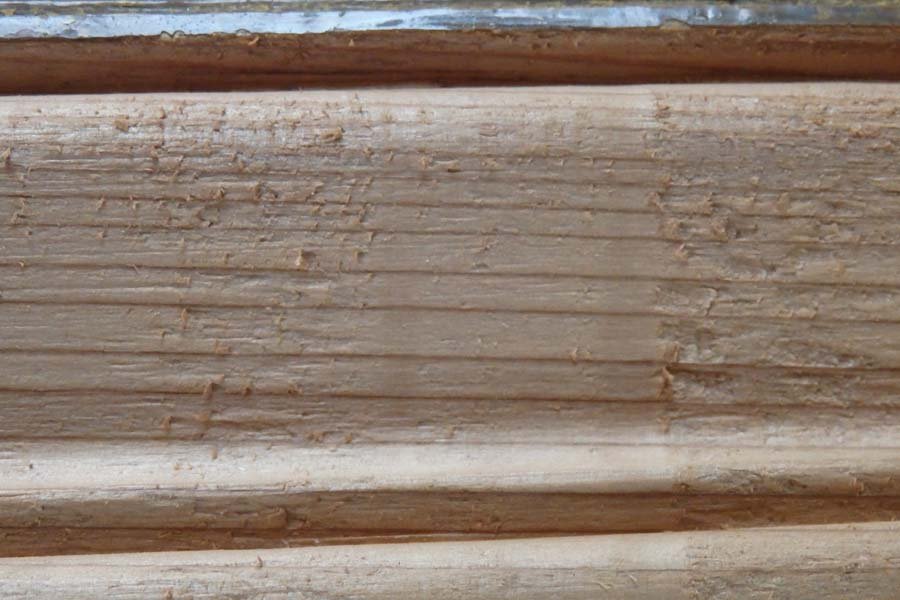 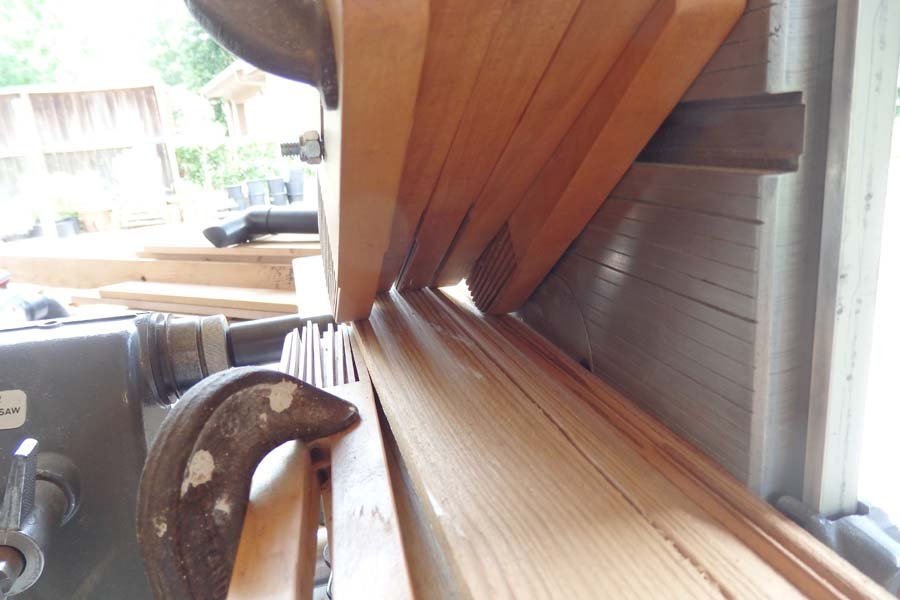 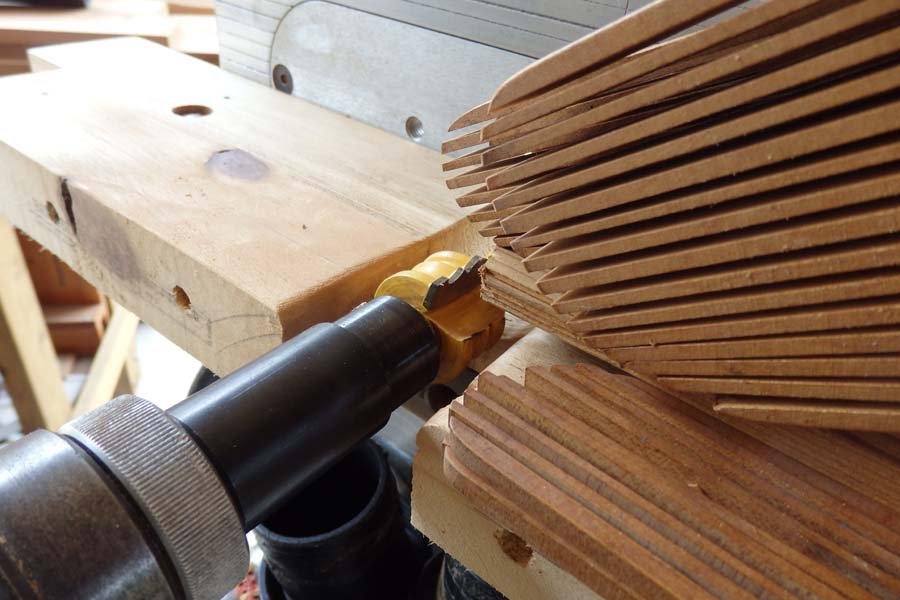 The wood grain makes all the difference in the world when making molding. some of those chip outs can be eliminated by making verry verry shallow cuts , but there is no guarantee . hard wood is really bad for this , also it would appear your feather boards could be stood up a bit straighter , just a opinion ,, the saw cuts in the feather boards could be a little thinner ,, say from a band saw , that may help with vibration and chatter ,,, it Looks good !!
Hobbyman2 Favorite Quote: "If a man does his best, what else is there?"
- General George S. Patton (1885-1945)
Top

Very clever setup and it made for good looking results. Thanks for sharing. Also, it's further proof that the Shopsmith can work well as a router/shaper.
Ed
Idaho Panhandle
Mark 5 of various vintages, Mini with reversing motor, bs, dc3300, jointer, increaser, decreaser
Top