Not a lot of woodwork in this post, but the Shopsmith sure was helpful.

We recently had new casement windows installed (17 of them

). We have a relatively new portable air conditioner that I needed to vent through our bedroom window, but casement windows require an adaptation to do this. I chose to screw my version to the removable bug screen.

I am quite pleased with how the adapter turned out. I bought an extra screen from the window supplier to modify, so that the original screen can go back in after AC season, leaving the rest of the window " as installed".
[ATTACH]25370[/ATTACH]
The above photo shows the lower 2/3 of the window bug screen covered by a piece of shatter proof acrylic plastic with a hole cut to suit the air conditioner hose end.
[ATTACH]25371[/ATTACH]
I cut the perimeter of the plastic sheet and the plywood retaining pieces with a fine tooth blade in the Shopsmith band saw and then smoothed them up with the drum sander in the SS drill press. The hole was cut using a fine tooth blade in a Craftsman sabre saw that I bought around 1970 and also smoothed using the drum sander.
I used #10 bolts through the plastic (they were what I had!) to hold the hose to the hole with washers under the bolt heads to spread the load.
[ATTACH]25372[/ATTACH]
The plastic is fastened to the aluminum bug screen frame with short metal screws that do not penetrate right through the frame. I cut small openings (slots) at the plastic sliding bug screen catches to make them accessible.
[ATTACH]25373[/ATTACH]
It looks ok from outside, fits in the window without a struggle and will be easily removed for the cooler months! 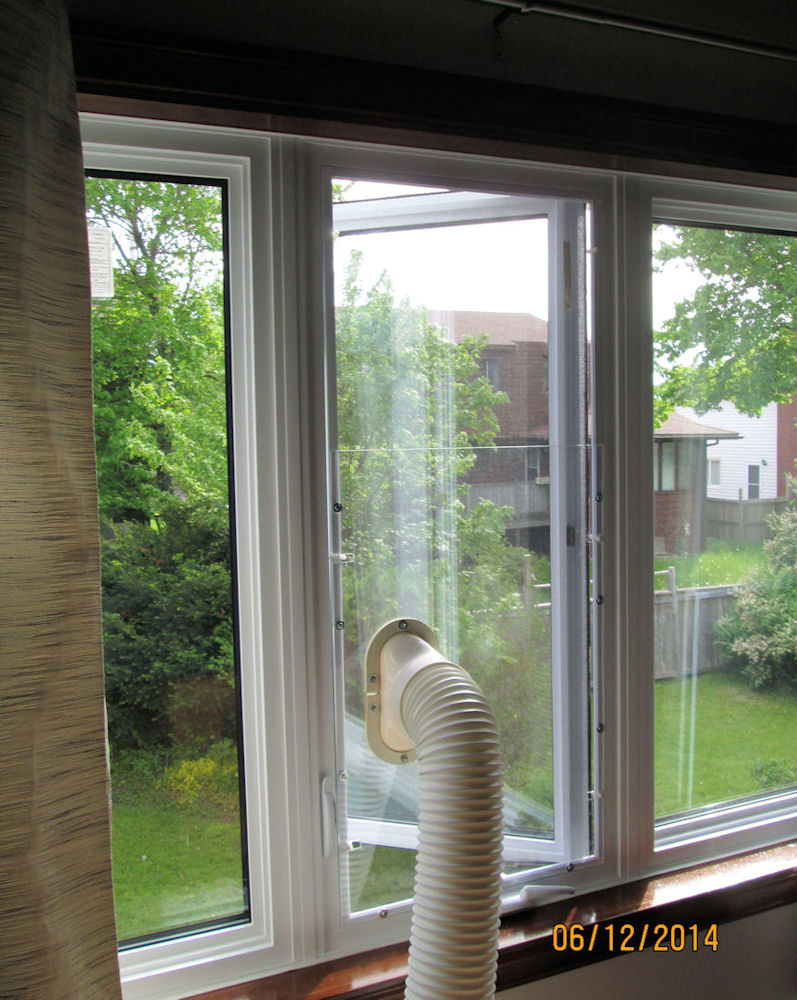 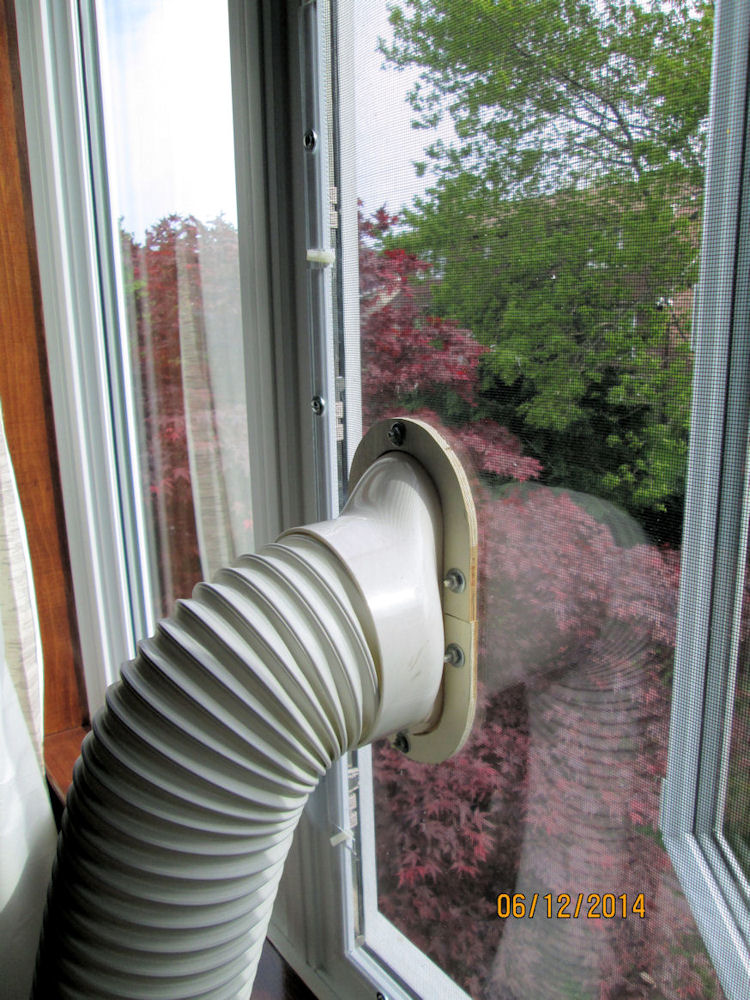 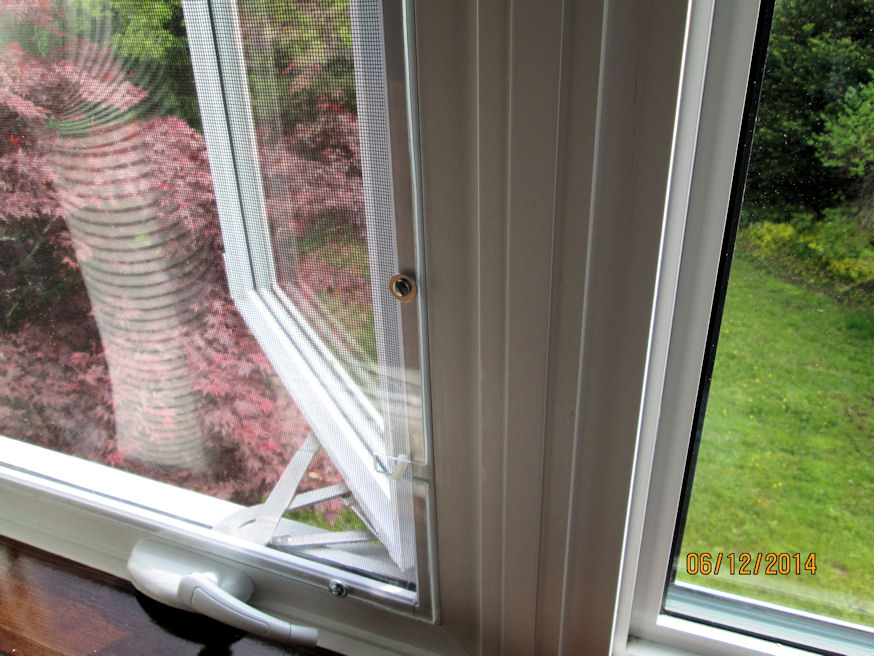 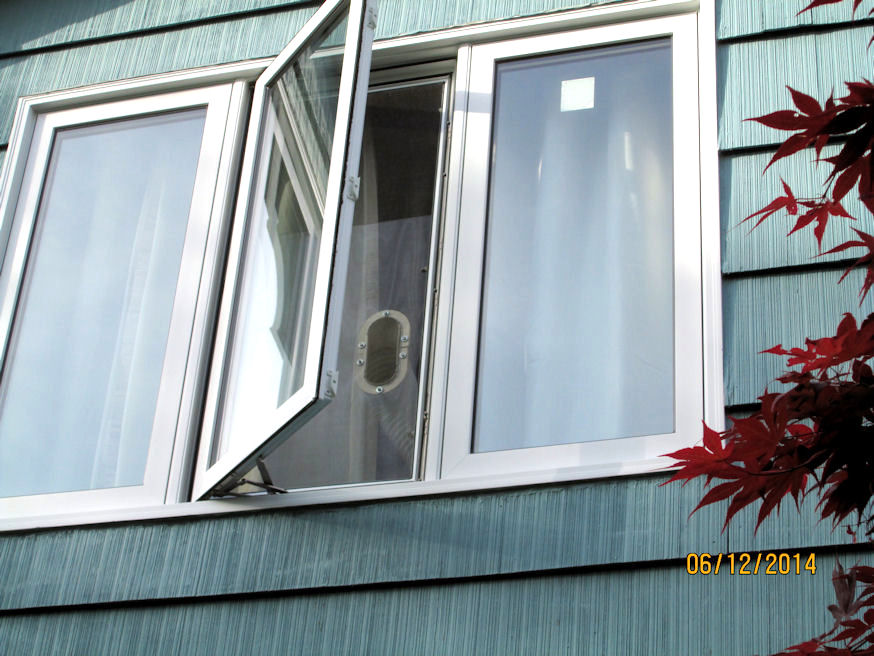 Hi, I live in the UK and finally, this year round, have invested in a portable air-conditioner. I'm really looking forward to it as I loathe the heat. Thinking about a proper window mount I came across your efforts online and was quite taken. For you it may have been a nice personal project but it took me two months of wrangling with a local guy to get mine finished.

It's not as robust as yours, but everything was done over email. I'm fairly happy but I feel that the 1cm thick perspex is too heavy. Living on the ground floor I have to remove it from the window frame each day and plan to tape it down, so not sure if it will stay put with the weight of the perspex but will find out this summer. 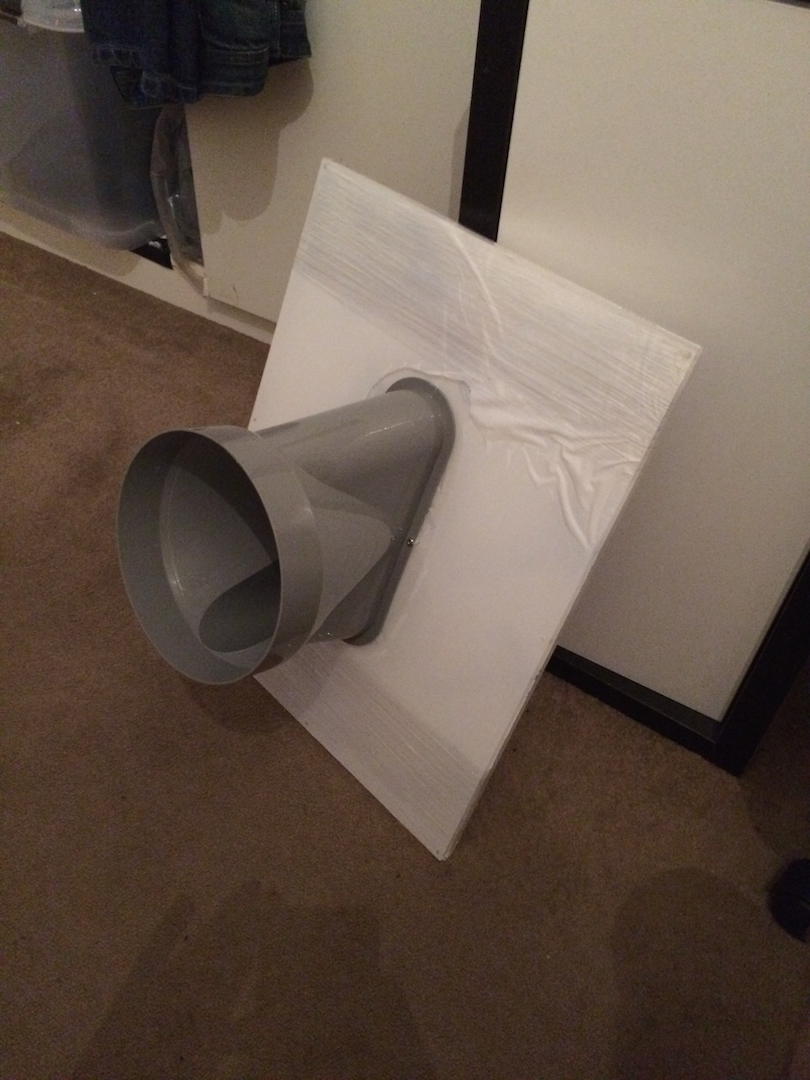 Nice adaptation. We have two portable units we use that judging from the adaptor are similar models. What impresses me most is how much output they have in relation to the power consumption. The new generation AC units are pretty impressive. To cool our great room I just ran the vent up the fireplace chimney which works very well.
Paul
Top

I will post more pictures when the AC unit arrived early next week.
Top

The air conditioner came and so it was time to install. But first, to inspect the fitting of the exhaust to the perspex pane. At first I though that I picked too thick a plastic at 1cm, but when I unpacked the machine fro the box I saw the exhaust window pipe form the first time (as I had yet to unpack the custom piece from its wrapping) to see that this was actually the right choice: 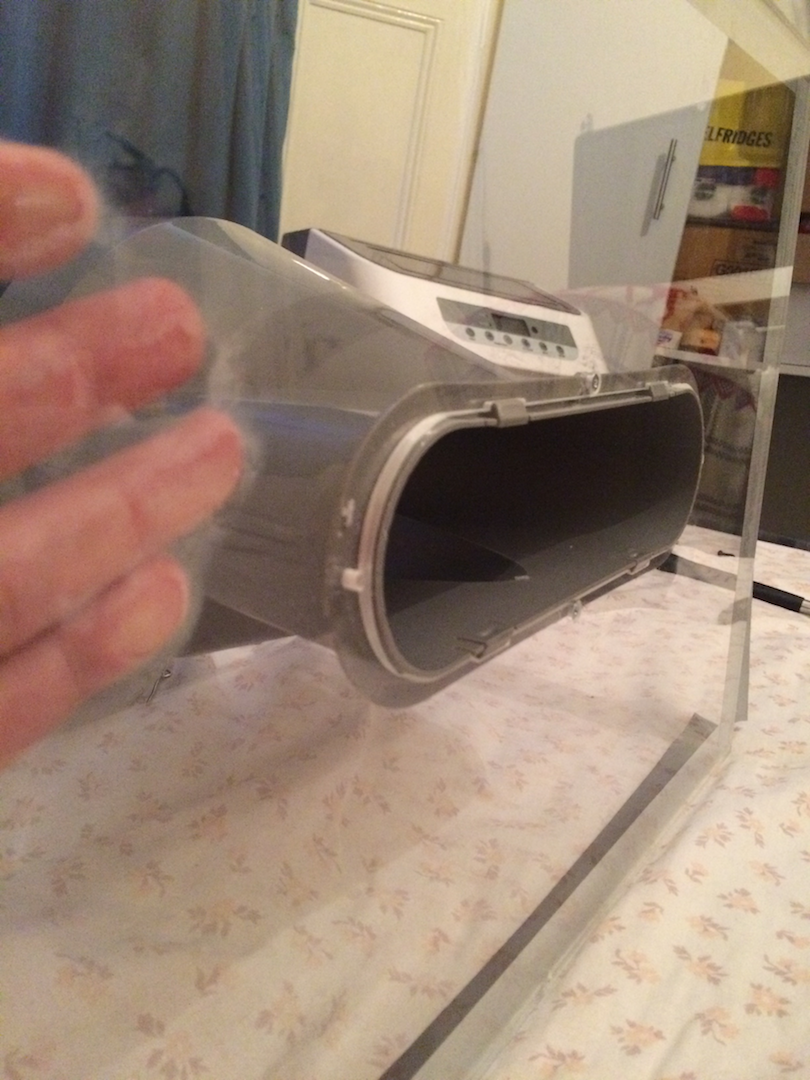 Next I fitted the top piece, very pleased to see that I could leave it in place and close my window at the same time. The segmented idea was a good one because I need a chair to reach that high, this was it's a lot less hassle when leaving the house. I'm on the ground floor, in London, not safe really. 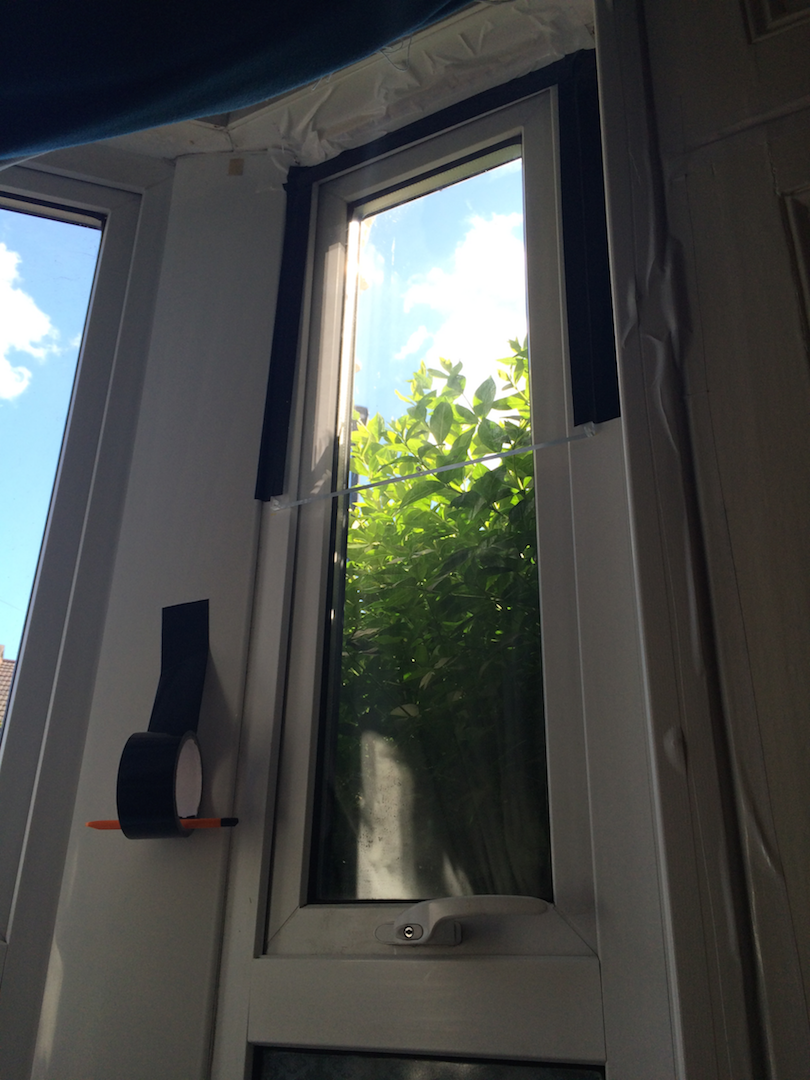 All said and done it took the weight of the tube hanging from it and was up and running... 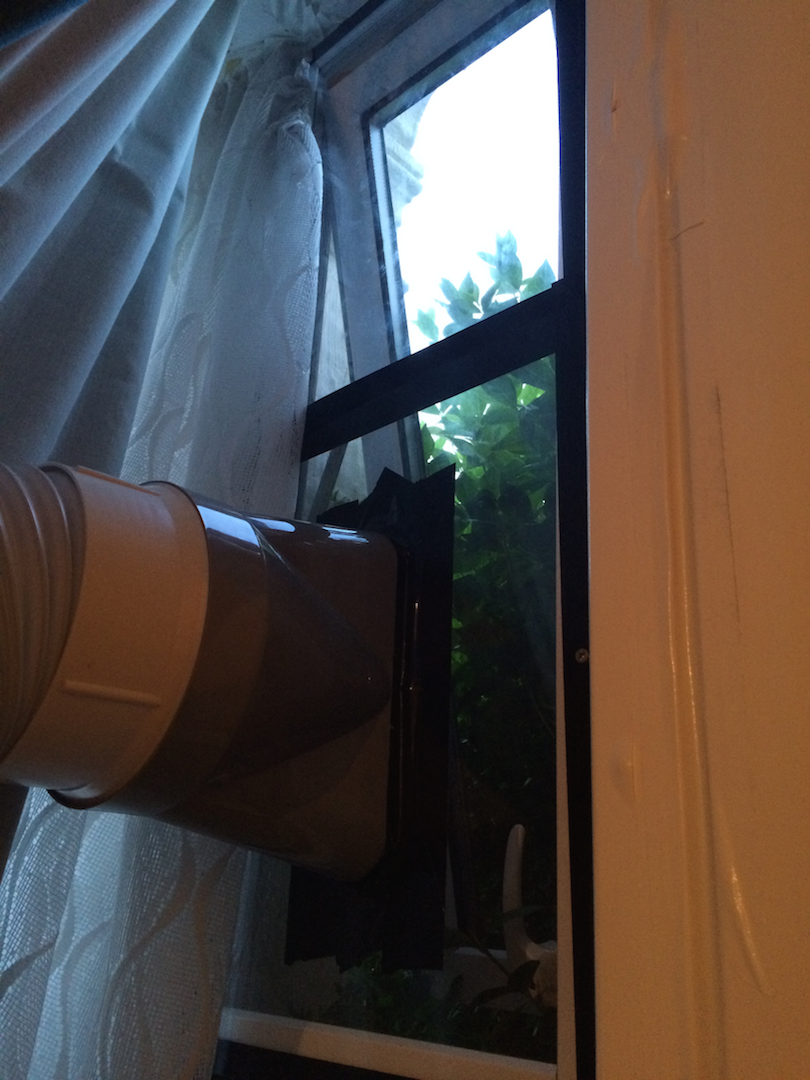 ...but then disaster struck, oh no, the tape wasn't strong enough! I had to use tape because I couldn't drill into the frame, it's rented accommodation and I didn't think it would be a good idea. What happened was after about half an hours use the tape heated up from the hot air hitting the outside window and dispersing the heat onto the perspex and that cause it to lose it's bonding properties, coupled with the weight of the pipe it gave way.

If it were not for the lower taped section it would have fallen and possibly broken the fitted exhaust pipe as it's comprised of quite a brittle plastic, I would have been really upset about that, but luckily it hung on! 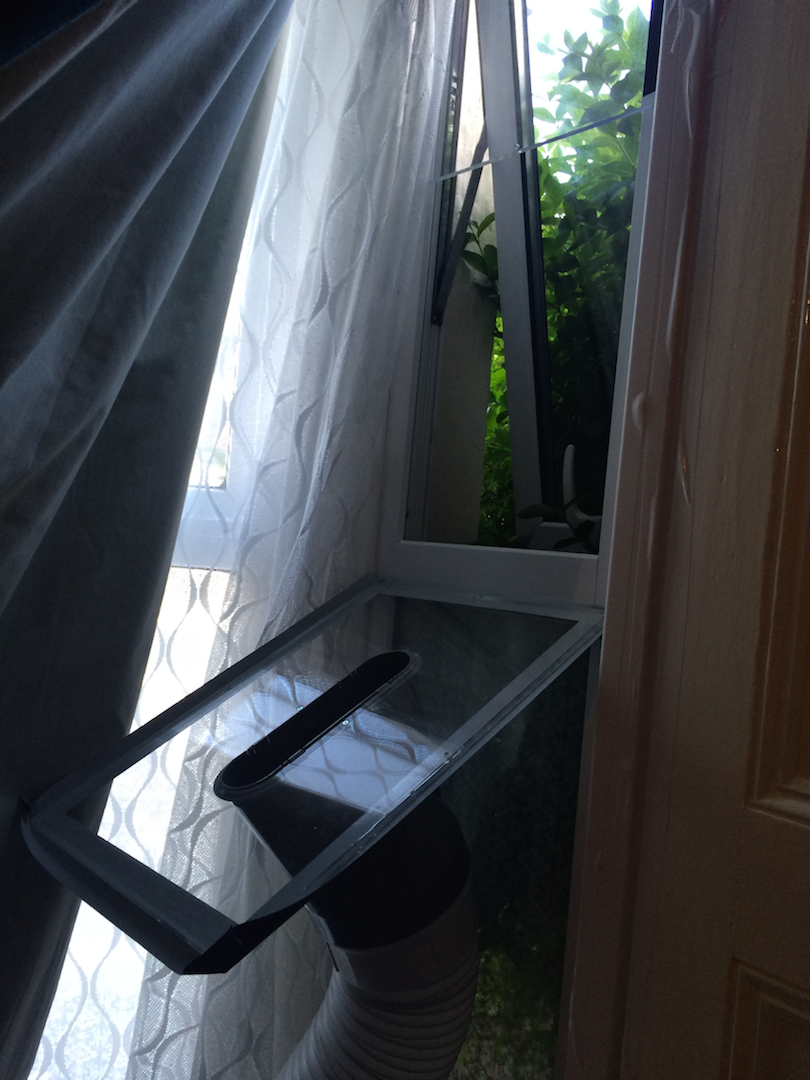 I bit the bullet and decided that I had to screw it in. Thinking ahead I got the labourer to drill holes around the edges of the perspex anyway, for a future time, luckily! I smacked those screws (yea, I'm the type of person who hammers screws) into the frame, I just don't think that much of my landlord anyway, this is London after all.

I kept the tape around the edges though as this acted as a seal to stop not only flies and pollen (hay fever sufferer here) out but the exhaust heat as well. 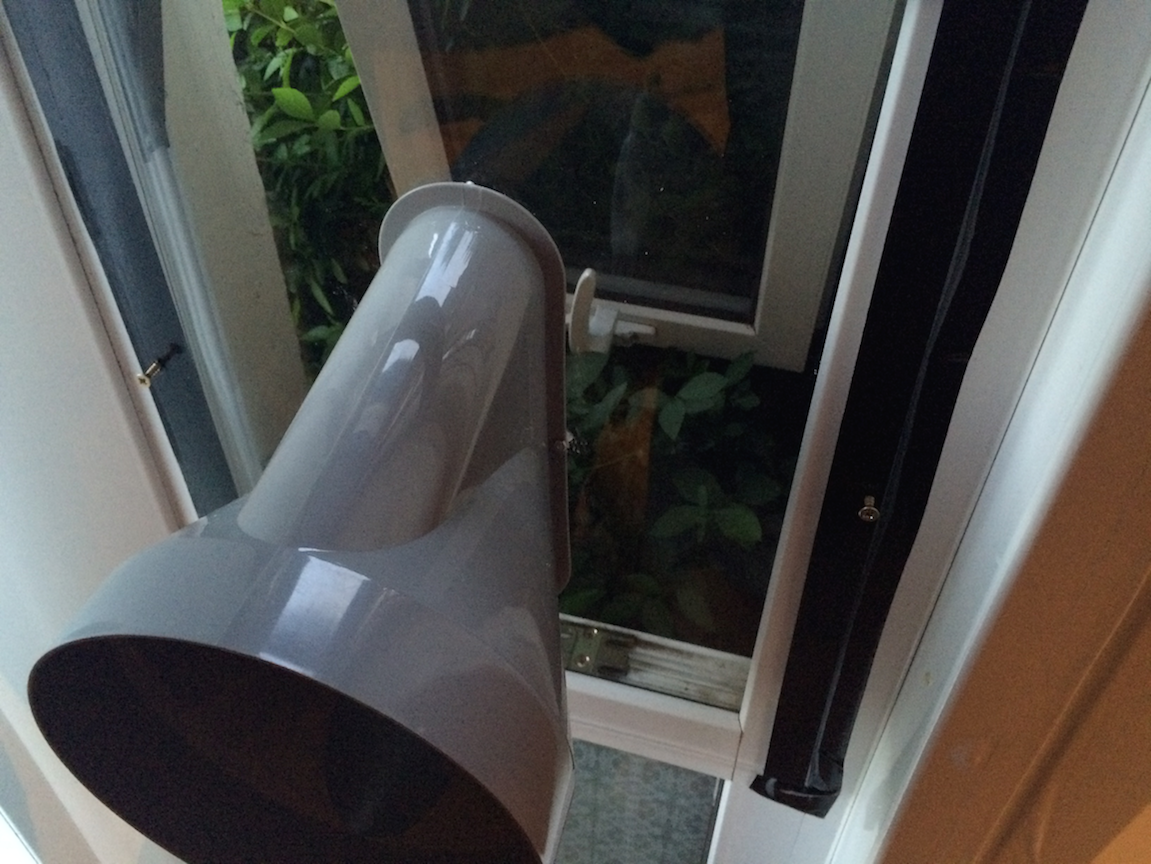